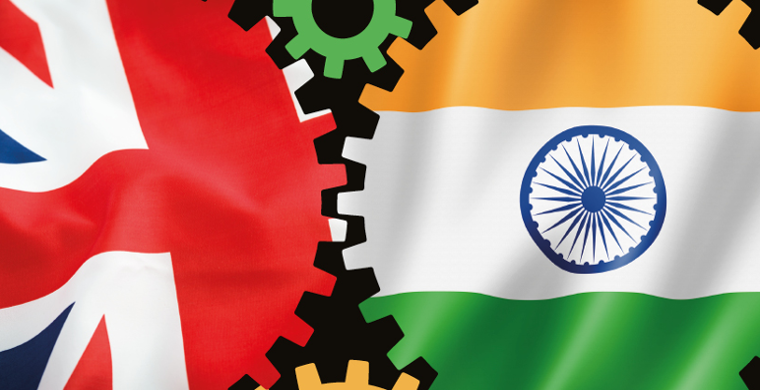 India and the United Kingdom share a modern partnership bound by strong historical ties. The bilateral relationship that was upgraded to a strategic partnership in 2004, was further strengthened during the tenure of British Prime Minister David Cameron who visited India thrice in his first term (July 2010, February 2013 and November 2013). The successful visit of Prime Minister Modi to the UK in November 2015 gave further impetus to the bilateral relationship. UK Prime Minister Theresa May’s visit to India in November 2016, which was her first overseas bilateral visit after assuming office in July 2016, reflects the continuity of interactions at the highest political level. The Commonwealth Summit scheduled in London in April 2018 presents another opportunity for both countries to infuse fresh momentum to the bilateral engagement through a meeting at Heads of Government-level.

Sir Dominic Asquith, the British High Commissioner to India, has seen ups and downs in the relationship between the two countries in his two years in Delhi. A Middle East expert, this career diplomat from a renowned British family has taken to India, making it a point to even spend his vacations in the country. According to him, he values the share of following; a rule-based international system, the democratic structures, a sense of tolerance, a sense of respect for everyone, facilitating easier trade, investment and getting economies going, and upholding the international institutions. That sort of context means collaboration has to be very resilient, because we are not always going to have identical priorities and interests, but unquestionably complementary ones. The most important way of describing it is explaining the importance of both countries to one another through dialogue. At the top of the list is trade and investment relationship between the two countries. UK remain the largest G20 investor in India. British companies here invest almost double in India of what French and German companies do.  Last year, there was a 15% increase in trade of both goods and services. So we look at a lot of that trade and investment data but that reinforces a much more human interaction. That explains why we issue more business visas to Indians than to the whole world combined. There is a whole mass of texture of institutional and individual links between UK and India. Those are not generated at the government level, but at the institutional level and they are done because they are beneficial to both the countries to solve some common problems.

The UK’s International Trade Secretary, Dr Liam Fox said: “India is the world’s seventh-largest economy and the fourth largest investor into the UK, while UK investment in India grew by 8.8% in the year to 2016. As an international economic department, the Department for International Trade continues to work closely with our Indian colleagues to maximise trade between our nations and I welcome this fantastic initiative, celebrating the historic trading ties between the UK and India.”

Describing the two countries as “modern, diverse and vibrant democracies”, the UK government is keen to step up on the “shared connections and values” which make for a “natural partnership” as Britain prepares to host the Commonwealth Heads of Government Meeting (CHOGM) in April, 2018.

India is one of the fastest growing major economies in the World, with annual growth rates of around 7 percent GDP. The UK is the single largest G20 investor in India with British companies employing nearly 800,000 people. India is the fourth largest source of FDI in the UK, with more than 800 Indian owned businesses operating in the UK and employing around 110,000 individuals. The Indian Diaspora in the UK totals about 1.5 million people and is one of the largest ethnic minority groups in the country.

Indian expectations were further shaped by Prime Minister Theresa May’s visit to New Delhi in November 2016. As May’s first state visit outside the EU, it had powerful symbolic value, and seemed to confirm India’s status as London’s key priority. To a Britain in need of partners post-Brexit, a bilateral deal with India was crucial. Despite a rising share of students in mainland Europe, India also provides the second-largest non-EU bloc of students in UK universities, an increasingly important demographic with half of India’s population being below 25 years of age. Aware of its strong negotiating position, India expected the UK to pursue the deal with a sense of urgency, allowing both parties to secure mutual benefits, with India focusing strongly on infrastructure and providing opportunities.

Nineteen months on, the proposed bilateral deal is nowhere close to conclusion. Rather, Britain recently tightened student visa norms for Indians, compromising both a key Indian priority and a valuable source of foreign exchange. In this light, and the progress of the UK-EU exit talks, India may need to adjust its expectations.

Indian high commissioner to the UK, Y.K. Sinha, has been making that point at various platforms, most recently in November at the London launch of the Indian Professionals Forum (IPF), a non-profit think-tank for Indian diaspora related policy advocacy set up to strengthen India-UK relations.

A Joint Working Group on Trade set up to lay the groundwork for a new post-Brexit economic partnership has held a few meetings this year but progress on that front is unlikely to be very significant until Britain is seen to soften its stance on the free movement of professionals and students.

Economic engagements- Bilateral cooperation on economic and commerce matters are guided by institutionalised dialogues of India-UK Joint Economic & Trade Committee (JETCO), Economic and Financial Dialogue and India-UK Financial partnership. The 12th JETCO meeting was held in London on 11 January 2018 between Commerce Minister Suresh Prabhu and UK DIT Secretary Dr. Liam Fox and both Ministers asked officials and business to take forward the recommendations contained in the Joint Trade Review and to identify opportunities for increasing bilateral trade. Both sides reviewed the progress held in the Joint Working Groups i.e. “Smart Cities” and “Technological Collaboration, Advanced Manufacturing & Engineering” under the aegis of JETCO. The 5th meeting of the Joint Working Group on Trade was held wherein delegation members discussed how to resolve trade related issues, with two subgroups on trade in goods and trade in services.

UK is the 4th largest inward investor in India, after Mauritius, Singapore and Japan with a cumulative equity investment of US $24.37 billion (April 2000- December 2016), accounting for around 7% of all foreign direct investment into India. India continued to be the third largest investor in the UK and emerged as the second largest international job creator with Indian companies having created over 110,000 jobs in the UK. About 10% of these 800 Indian and India-focused companies based in the UK are listed on the London Stock Exchange. According to the UK Trade and Investment (UKTI) in their ‘2015/16 Inward Investment Annual Report’, Indian companies created 127 FDI projects in the UK in 2016-17, and created 3,999 new jobs and safeguarded 7,645 jobs.

The relationship between the UK and India is poised to enter a new defining era. Dramatic changes to the UK’s trading outlook has prompted a revision of its international partnerships, and Prime Minister Narendra Modi’s trade reforms, aptly characterised by his “Global India” programme, indicate that the two countries now find themselves at a similar trading juncture.

The envoy of Indian professionals will play an important role in defining the “contours of a winning partnership between India and the UK”, freer movement of professionals between the two countries will be central to any “mutually beneficial agreement” in the future.

Trade dialogue between superpowers inevitably takes time, but with the input and knowledge of those currently at the forefront of UK-Indian trade, and with great platforms like UK-India Week driving the dialogue forward, the relationship is set to make even more history.

Ankit Malhotra is a third year student at JSIA.