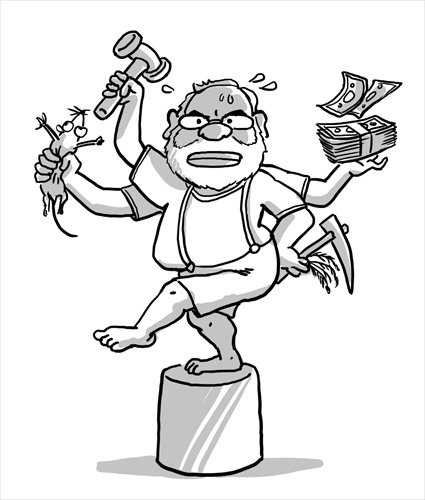 Sanjaya Baru, in his phenomenal book, “The Accidental Prime Minister” stated that the economy that Atal Behari Vajpayee bequeathed for the next PM was the best independent India has seen. FDI was at an all-time high, inflation was low and infrastructure investment was soaring. Fast forward 10 years of Manmohan Singh’s prime ministership, the cracks in the economy were pretty evident.

Manmohan Singh’s tenure is dubbed as a period of “policy paralysis”. When he relinquished the post of PM, Indian Rupee was part of the Fragile Five. UPA 1 enjoyed the benefits of a strong world economy without taking any decisive policy actions itself, some might argue that UPA 1 also showed a strong economy because of the tough measures taken by NDA 1. Unprecedented crony capitalism during the UPA regime compounded the problems by nurturing the monster of NPA. Unnecessary expenditure during UPA 2 was responsible for a Fiscal Deficit of 4.9% of the GDP. Actual numbers are said to be even higher because of the deceptive politics of P Chidambaram as the Finance Minister. It is said that Chidambaram fudged the numbers to show a better picture of the economy during an election year. He deferred the expenses and assumed revenues to reduce Fiscal Deficit. It is also accused by the BJP that UPA created Oil Bonds, which meant that they will import oil today and make the payments at a later date, putting the burden on the next government. If this all was taken into account, Fiscal Deficit would have easily crossed the 5% mark, after which, it is said that hyperinflation is imminent.

This is just a brief introduction of what the Narendra Modi government inherited. After 5 years of his government, has he made the economy any better? There have been some meaningful reforms to improve the condition and get the economy out of the quagmire of UPA’s making. But there have also been some decisions which managed to slow the growth of the burgeoning Indian economy. Let us take a look at them one by one.

IBC can be safely called the biggest and the most daring economic decision of the NaMo administration. This was one of its kind decision which shifted the balance of power in favour of the lenders, indicating a significant change from the previous policies of power residing in the hands of the borrowers. IBC gives the lenders an incentive to solve cases of distressed assets out of the court.

IBC was introduced to get the banking industry out of the mess of NPAs. Non-Performing Assets, as defined by the IBC, are the ones in which repayment has been due for more than 90 days. IBC has many institutions under it. These are National Company Law Tribunal (NCLT), National Company Law Appellate Tribunal (NCLAT), Insolvency and Bankruptcy Board of India (IBBI), Insolvency Professionals (IPs), etc. Under the IBC, the lender or the borrower can go to the NCLT to file a case. If NCLT accepts the case, an Insolvency Professional will be appointed to devise a strategy to resolve the case. The board of the borrowing company will be suspended and the IP will be given full autonomy to get the matter resolved. The IP will be given 180 days to present a strategy to the NCLT, additional 90 days can be given if a strategy is not worked out. If the IP believes that there is no scope of resolution, the company will be liquidated and then the creditors will be paid off.

Now, after three years of IBC, there seems to be some hope for the public sector banks with the Gross Non-Performing Asset (GNPA) ratio expected to fall from 10.8% in September 2018 to 10.3% by March 2019. In the case of public sector banks, the GNPA is expected to fall from 14.8% to 14.6% during the same time period. But the government still has to be cautious about slow or no recovery in the mining, food processing and construction industry.

Another major decision taken by the NaMo administration was the introduction of the Monetary Policy Committee (MPC). MPC is a committee of the RBI comprising of 6 members in total. MPC consists of 6 members, 3 selected by the RBI and 3 by the government. All of them carry a vote, each vote with equal weight, in the case of a tie, the tiebreaker vote remains with the governor. The main agenda of MPC is to fix the repo rate to maintain an acceptable level of inflation.

This is a shift from the previous policy where the decision to fix the repo rate was with the governor only. The governor was advised by his deputies and other advisors but in the end, the decision was the governor’s. But now there are more voices in the decision-making process. This is a good thing as different approaches to the same problem will widen the scope of decision making and will make sure that all the aspects have been thought over. Many countries have adopted this framework, and consequent studies have found that the countries which have adopted this setting, inflation in those countries have been brought down to acceptable levels.

There is one more change in this policy from the previous one. Earlier the governor, while fixing the repo rate, had to take into account a lot of aspects such as inflation, growth, employment, banking stability and the need for a stable exchange rate. Now RBI is only supposed to take inflation as a factor when deciding the repo rate. This used to keep the governor under a lot of pressure from various stakeholders and make the governor subject to a lot of lobbying from different stakeholders who had different wishes as to what the repo rate should be, some wanted a lower rate and some wanted a higher rate. This is one of the reasons that this government has been able to keep inflation at a much lower level than the previous administration.

There are four words that describe demonetisation in an appropriate manner, these are, “economic disaster, political masterstroke”. This essay will only talk about the economic side of it. Demonetisation has been single-handedly able to lower India’s GDP growth rate by 2% points. Demonetisation was implemented in such an abrupt manner that its tremors can still be felt today.

There were many reasons given by the government to defend its indefensible policy. The main reason was to tackle the problem of black money in the economy. The government expected that some 3 lakh crore of demonetised currency will not enter the banking system, thus giving a windfall gain to the RBI and eliminating a huge chunk of black money from the economy. But 99.3% of the demonetised currency made its way back to the banking system. This means people found a way to circumvent around the system, which indicates a huge failure on the government’s part. According to many reports, Indians only keep 2% to 3% of their illegitimate wealth in the form of cash, while stashing a major form of wealth in form of gold or properties, if the government actually wanted to fight black money, they would have targeted these spheres.

Another reason cited by the government to demonetise 86% of the currency was to fight the insurgency in various parts of the country. There seems to be some merit in this idea as it is well known that Pakistan supported groups in India use counterfeit currency to carry out their operations, but demonetisation would have been welcomed if it was coupled with some long term decisions to combat insurgency directly, which if we look at the stats, does not look government did. The government cannot just deem the currency illegal if it finds that illegal currency is being used by insurgent groups. It has to implement policies that attack insurgency at its core.

Thus, demonetisation just looks like a political decision to win the crucial state of UP for BJP. But this also came at a huge cost for the country, which was, Raghuram Rajan leaving the RBI as he didn’t agree with demonetisation. A person of the intellect of Raghuram Rajan leaving the country due to the difference of opinions with the government says a lot about the failure of the government to retain talent and unwillingness to listen to a voice of reason.

Dhairya Nagpal is a 1st-year student of BA Economics at Jindal School of Government and Public Policy.