The state of Venezuela currently finds itself in a beleaguered state. The downturn in global commodity prices, particularly oil (Venezuela’s chief export), has hit the Venezuelan economy hard. In this article, Achyut Mishra attempts to analyse the relationship between a Commodity Price Shock (henceforth CPS) and various macroeconomic indicators of Venezuelan economy.

Before embarking on an analysis of what constitutes a CPS, it is imperative to understand what a commodity is. A commodity or a primary good is one which is raw or partly refined and whose value mainly derives from the cost of finding, gathering, or harvesting it, as distinct from a manufactured good whose cost largely reflects the cost of manufacturing process. Examples of commodities include metal ores, crude oil, cotton, rubber, and grains. There exists very little, or no difference, among commodities of the same good, and they sell at the same price. Trade in commodities generally takes place through future contracts.

A CPS occurs when the prices of commodities (as measured by various Commodity Price Indexes like S&P GSCI or DJCI) increase or decrease significantly. The reasons can be myriad and thus won’t be analyzed. They may be supply shocks (from wars or political upheavals) or demand shocks (slowdowns or reduction in demand from major importers like China).  This change in prices may happen for just a short or a very long duration. If prices increase significantly then it’s called a positive CPS. If they decrease, then the shock is negative. As can be seen from Fig 1, Commodity prices have plunged significantly from June 2014 to May 2016. This significant reduction can be labelled as a negative CPS. 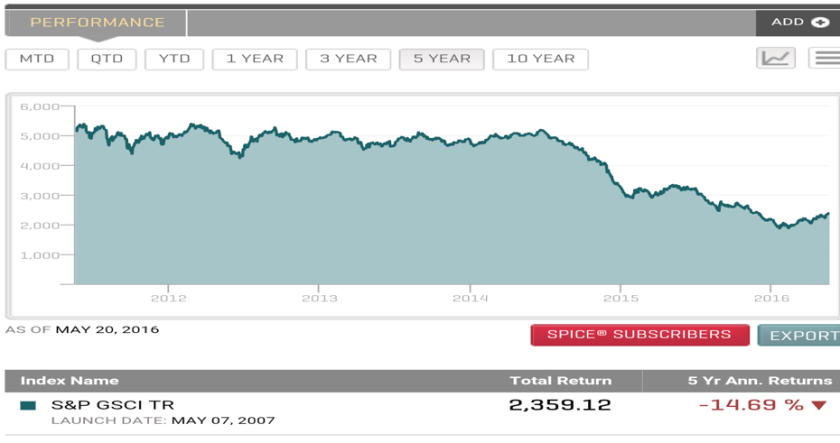 There exists a significant amount of literature which analyzes the effects of a CPS on a country and its various economic indicators. However, before embarking on the exercise of enumerating the effects a CPS can have, it is important to list down a few caveats:

One aspect which a CPS definitely affects is revenue earned through exports, and this change in combination with various existing factors, may affect other variables as well. An empirical analysis conducted on countries of Sub-Saharan Africa provided the following observations (Deaton & Miller, 1995): Countries grow faster when the prices of commodities they export are growing and vice-versa. There exists no clear association between debt and commodity price booms. Commodity price increases tend to increase inflation. The first result was again corroborated by another empirical analysis (Deaton, 1999). It also shows a close positive relationship between commodity price movements and growth. Another empirical analysis shows that negative CPSs significantly reduce per capita growth rates (Dehn, 2000). Another analysis shows a strong correlation between a downturn in the price of a country’s main commodity export and outbreak of civil war in Sub Saharan Africa (Brückner & Ciccone, 2010). There also exists a positive relationship between a negative CPS and financial sector fragility (Kinda, Mlachila, & Ouedraogo, 2016). Here, financial sector fragility is characterized by factors like higher Non- Performing loans, higher bank costs, and greater banking crises etc. The relationship between debt and change in commodity prices is not very straightforward. One study (Arezki & Brückner, 2011) shows that increase in commodity prices lead to a significant reduction in external debt in democracies and no significant reduction in autocracies. It argues that during commodity windfalls, autocracies increase government expenditures while no such change occurs in democracies. The relationship between commodity prices and a government’s fiscal policy is also well- documented. As an example, the response of Oil Producing Countries from the boom years of 2003-2008 and during the bust of 2009 was pro-cyclical and a decrease in prices resulted in a significant decrease of government expenditure (Villafuerte & Lopez-Murphy, 2010).

Apart from the effects, it is also important to list down various measures which countries adopt to mitigate the effects of a downturn in commodity prices. One of the strategies countries adopt is the creation of a sovereign wealth fund/ natural resource fund. The revenue from a country’s main export can be directed towards this fund, and it can be used to offset future shortfalls in revenues and expenditure requirements arising out of volatility in commodity price markets (Sachs & Maennling, 2015). It needs to be mentioned, however, that the presence of such funds must be complemented with institutional mechanisms and oversight bodies, and the rules governing access to the fund are strictly adhered to. Another measure can be to diversify the economy (Sachs & Maennling, 2015). Countries should attempt to reduce their reliance on just export of commodities and try to move towards complex and technologically advanced exports.

Venezuela’s main commodity export is crude oil. The oil and gas sector contributes around 25 percent to its GDP and its oil revenues account for about 95% of its export earnings[2]. As can be expected, fluctuations in oil prices have had significant impact on Venezuela’s fortunes. The graph below presents the changes in the oil prices for the past 50 years[3]. Because of the difficulty associated with accessing pre-1998 data and also taking into consideration the scope of this work, the analysis between changes in oil prices and their impact on Venezuelan economy will be restricted to only the post-1998 period. However, it needs to be mentioned that the economic slowdown which started in Venezuela for almost two decades in 1980 did coincide with a decrease in global oil prices. Maybe it wasn’t the sole contributing factor but certainly must have been an important one. However, again an economic decay that lasted for almost two decades can’t be explained by just one factor, and particularly when oil prices stabilized after some time.

As can be seen from the graph, world oil prices started to increase from 1999 onwards and barring a minor dip (which probably came as a result of USA’s invasion of Iraq) continued to increase till June 2008 after which they suddenly declined. They again picked up from January 2009 onwards and remained stable till June 2014. They have been on a downward trajectory ever since.

Hugo Chavez took office in 1999 and till February 2003 Venezuela suffered from political turmoil. This included a military coup that temporarily ousted the constitutional government in April 2002 and also an oil strike from December 2002 to February 2003. During this oil strike Venezuela lost almost 24% of its GDP (Weisbrot & Sandoval, 2007). After this, however, political conditions improved and Venezuelan economy embarked on an upward trajectory led by a stable government and rising oil prices. This trajectory was halted by the 2008 global slowdown and consequent negative oil price shock. However, once the oil prices recovered so did Venezuelan economy (after a brief period however). This recovery has now again been halted as the global oil prices underwent another negative shock. This relationship between global oil price and indicators of Venezuelan economy can be seen and analyzed through a few graphs: the first graph shows Venezuela’s GDP annual growth rate and makes evident the reliance of Venezuelan economy on oil prices. Oil price shocks in 2008 and 2014 adversely affected its GDP annual growth rate. The second shows the impact on the valuation of Venezuelan exports as oil constitutes 95% of it. The third shows Venezuela’s current account.

The effects of oil price shocks on Venezuelan economy are quite evident. However, many export dependent countries like Norway and Saudi Arabia have been able to weather such storms which Venezuela couldn’t. There are various reasons which explain Venezuela’s failure. While failure to diversify, a three-tier exchange rate system which created a huge black market, nationalization of PDVSA (Venezuela’s main oil company) which affected its ability to invest in new technologies, corruption and lack of transparency etc. are indeed important, they are probably not the major reason.

Venezuela went on a spending spree from 2006 onwards as oil prices continued to soar. This spending didn’t even abate when oil prices declined. Though many oil exporting countries run budget deficits during slowdowns (e.g. Saudi Arabia, approx. 20% in 2015), the prudential ones also save during the boom years (Fox, 2015). Though Venezuela did create a Sovereign Wealth Fund in 1998, it became defunct after 2003 and no money was transferred to it (Toro, 2015). Thus, Venezuela spent when oil revenues were high (without saving) and continued to spent when oil prices declined (by accumulating debt). This is probably the major reason behind its present situation. The graphs below show how Venezuelan government spending continued to increase, how Venezuelan budget deficit increased, and how Venezuelan government debt to GDP ratio increased.

The situation in Venezuela appears very bleak. Inflation stood at around 180% year-on-year in December 2015[4] and as per various estimates might cross 500% this year. People are queueing outside departmental stores for even essential commodities like milk. There are chances that it might default on its foreign debt as the choice is between default and political suicide for Nicolas Maduro’s government (Matera, 2016). Venezuela has to pay 4billion USD in the fourth quarter of this year and if it makes that payment using its oil revenues, it will affect its ability to purchase imports and make them costlier. Thus, the government might choose default over a political loss. Venezuela’s foreign exchange reserves have also vastly depleted particularly after the oil price decline started, and may not last for very long. Though IMF could have been an option, the government has disavowed taking IMF’s help completely (Matera, 2016).

Thus, this essay shows the impact a CPS can have even on a well performing export driven economy. Though its adverse impact on Venezuela can be seen even during 2008, the crisis from 2014 onwards is a lot more severe as oil prices slumped for a very long duration. However, this doesn’t imply that there are no safeguard measures to prevent against it. There are, it’s just that Venezuela didn’t adopt them.

Achyut Mishra is a student at Jindal School of International Affairs.

[3] The graph attached is of West Texas Intermediate (WTI or NYMEX) crude oil prices per barrel. It has been adjusted for inflation using the headline CPI and is shown by default on a logarithmic scale.