Sourish Dutta is an MPhil Student of Applied Economics at Centre for Development Studies, JNU

According to the ASI database, although the flow of “Net Income” is increasing impressively, the flow of intensity of net income (i.e. net income/output) is in decline mode. Through acute statistical analysis, throughout ASI data, it is noted that the fluctuating behaviour of net income time series is fully characterised by profit flow, while the falling trend is imposed by emolument flow. The problem is all about lack of synchronicity between flows of net income and its share to total output. In immediate response, it can be said that the growth of net income, to some extent, is statistical illusion. Now the obvious questions are: What are the influencing factors behind the decline of net income intensity? Is there any latent factor? What would be its consequence? In this essay, we will address all these issues at an aggregate level as well as at a disaggregated level of ASI database.

(I feel, after reading the ASI manual, that Net Income reflects pure value added rather than GVA or NVA. Because, net income is derived after adjusting the net rent/interest paid for production. That’s why here I have used Net Income as a proper indicator of value addition.)

Though this essay’s title reflects some criticism about the statistical artifact of ‘value added’, it is purely about examining the hidden mechanisms of the flow of value added in Indian industry. For this analysis, here we will rely only on the ASI database. The idea is derived indirectly from the debate of manufacturing growth in the new GDP series. However, if we plot the net income time series, we would see a clear and upward trend (with impressive growth) with time. But the problem is: the rising trend of net income is not consistent with its intensity. Figure 1 (below) shows the time series of both variables from 1981 to 2012. Here r2 is the intensity of net income.

In the figure above, it is noted that there are three different downward trends of share of net income to output viz. in 1980s (1985 onwards), second half of 1990s and late 2000s. The average extent of these downward trends is more or less equivalent. As we are in the 21st century, we are comparatively more concerned about the fall in the late 2000s. This fall started from 2007 with decline of above 15% to above 11%. After studying the previous two downfalls, the current downfall might touch a new record low-level share of net income in Indian industry. In fact, the flow of intensity had touched a record low-level around 10% of total output. As a result, we can see a flat region in the absolute flow of net income following the year 2000.

The Economist Rashmi Banga says that the rise in manufacturing output with falling manufacturing value-added could be explained by rising resource intensity of manufacturing sector which would imply rising fuel consumption. However, fuel consumption has steadily declined as a proportion of manufacturing inputs, i.e., from an average 11 per cent in 1980s to 6 per cent in 2000s. But, before going to the indirect decomposition of value added, we have to discuss the direct decomposition of value added in Indian industry. Hence, we examine the downward trend of net income intensity in the direct approach. To do this net income is decomposed into two major components i.e. total emolument and profits. In Figure 2, r3 is profit intensity and r4 is emolument intensity (r2 is net income). 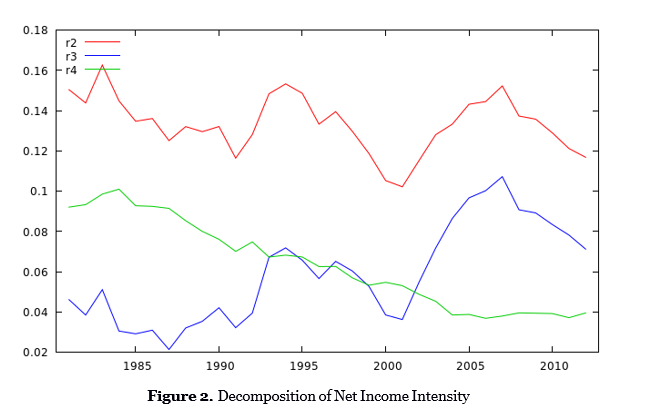 In this figure, we can see some interesting facts. Though both factors are very influential to net income, emolument intensity was a dominant factor (trend determining) for aggregation. After 2002, the profit intensity became the leading factor influencing net income. However, an overall view suggests that profit intensity was always the shape/fluctuation determining factor, whereas emolument intensity was the trend determining component. Besides this, there is a tendency of a declining gap between share of profit and emolument at aggregate. Indeed, the 21st century’s decline in share of net income can be explained directly though profit intensity. Here we can imagine a criss-cross/oscillatory relationship between share of profit and share of emolument, which can be predicted through classical political economy, and it is happened due to lack of indigenous innovative capacity or technological progress. But the influence of technological progress, to some extent, is latent or invisible. In order to show the effect of technology, we should go to the root of net income. Therefore, we need to show the derivation of value added at gross level from total output.

In the latest data, it is noted that contribution of total input to output is about 83%, while 17% of output is contributed by gross value added. We know that the sum of these two intensities is equal to 1. Therefore, if input intensity is rising, then obviously intensity of gross value added would fall. Through an econometric test it is also established that there is a short run as well as a long run perfect negative relationship between two factors of total output. Hence, the explanation of a fall in the share of value added can be made via rising share of input to output, and this rising trend of input intensity can be properly explained through the issues of productive efficiency of Indian industry. My claim is: there are some latent or hidden parameters which are influencing inputs but not value added, and finally the value added intensity is affected by influenced input intensity. Indeed, productive efficiency is a true reflection of existing indigenous innovative capacity or real technological prosperity in production process.

Now if we decompose the input intensity into material and fuel consumed, we will see that the contribution of material intensity is higher than fuel, and it is rising year by year. Actually, total input comprises gross value of fuel materials etc. consumed and also other inputs viz. (a) cost of non-industrial services received from others (b) cost of materials consumed for repair and maintenance of factory’s fixed assets including cost of work done by others to the factory’s fixed assets (c) cost of contract and commission work done by others on materials supplied by the factory (d) cost of office supplies and products reported for sale during last year & used for further manufacture during the accounting year. But due to limitation of the aggregate database, we will confine ourselves to two factors. In Figure 4, r8 is representing fuel intensity, whereas r9 is representing material intensity. 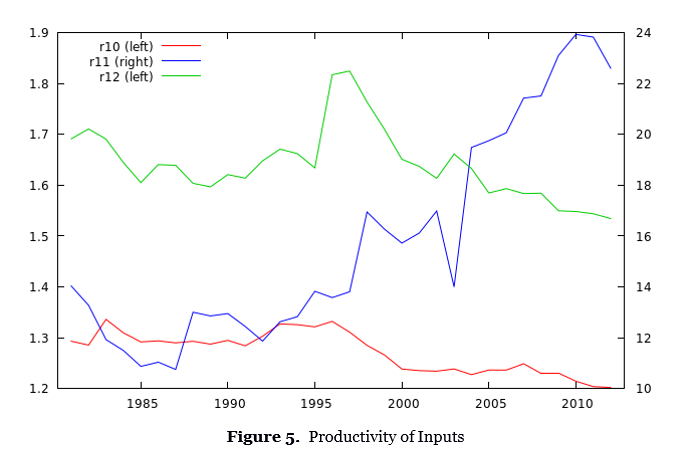 On the other hand, the technological issue can also be explored through the capital-labour ratio of the Indian industry. Here (Figure 8) we have calculated different capital-labour ratios: KL(E) ratios for invested capital to labour (employees), whereas KbyL(E) ratios are meant for physical working capital to labour(employees) in the production process. All ratios are rising except KbyE ratio. Here L is for workers and E is for all employees. KL and KbyL are important ratios for the industry, and both are rising with time.

The overall picture of production process and its environment can be shown through the rate of net investment (Figure 9). Indeed, the picture is not very impressive, and net investment flow shows negative growth (statistically significant) throughout the period of study. It also depicts the present crisis of business confidence and innovative capacity.

In order to verify the interesting outcomes revealed above at a disaggregated level of Indian industry, we use a unique type of mapping at 2-digit level in ASI database. In this mapping (see the table below), we are interested in two types of sectors viz. one is Good Sector and another is Bad Sector. Here “Good” (“Bad”) is defined as higher net income intensity as well as higher growth rate of net income intensity from aggregate average and vice-versa. But here we have focused only on manufacturing sectors.

If we analyse these scheduled “Good” sectors, we will find that the driving factor of their ‘high’ nature is majorly due to higher profit intensity not the emolument intensity (same at aggregate level). This is evident from the figures below. Though the fluctuation in profit intensity is much more than emolument intensity, it has a clear rising trend. And if we see the flow of net income intensities of these sectors, then it is possible to deduce that the fluctuating behaviour is totally driven by profit, while the declining trend is characterised by emolument. Figure 10 when matched with Figure 11 reveal this story.

Now we have to see whether the share of these sectors to aggregate net income has grown  or not with time. But the figure 12 does not look positive for the Indian industry. Currently its share is around 12%. Meanwhile, the share of so called ‘Bad’ sectors (Figure 13) in aggregate net income is also falling, and in recent past it was around 10%. Nevertheless, the overall picture is implying that there is a positive hope of raising the share of ‘Good’ sectors rather than the ‘Bad’ ones. 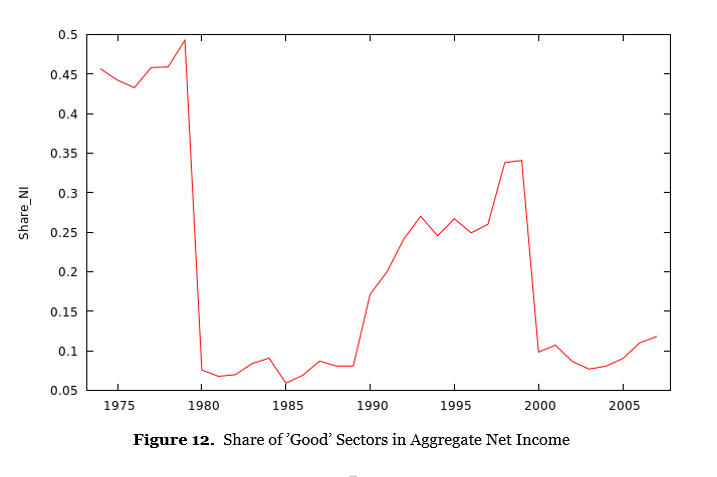 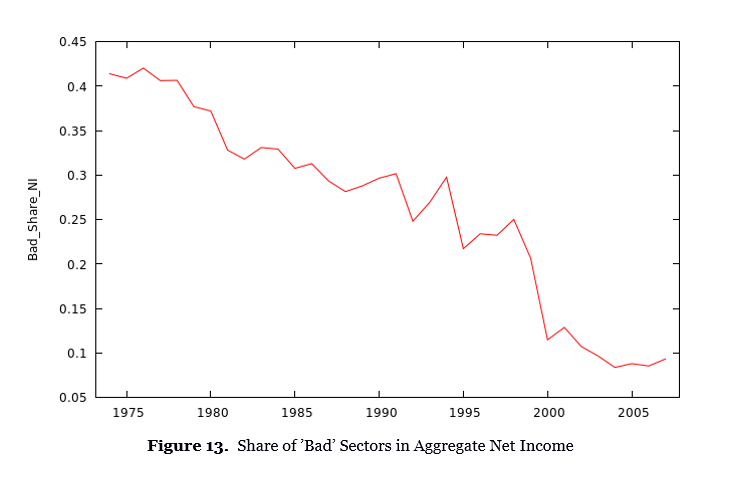