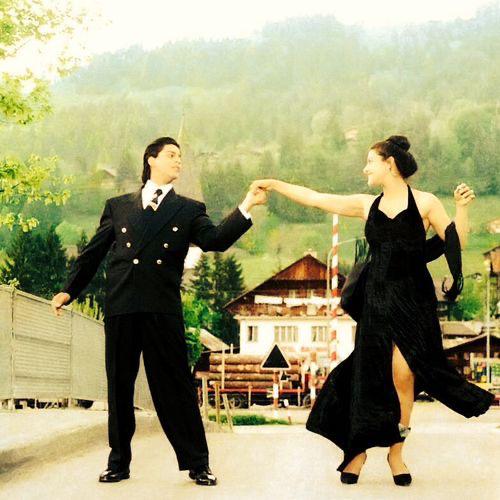 Dilwale Dulhania Le Jayenge (DDLJ) completed twenty-five years since its release in October of 2020. This milestone led Mr. Shashi Tharoor to tweet, “….When I finally came back to India for good in 2008, it was at the top of a list of Bollywood movies I had to see to catch up on evolving culture!”  This gets one thinking about the role of Bollywood movies in establishing and influencing important aspects of life such as culture, identity, and tourism. According to Arjun Appadurai, Bollywood is one of the main sources of independent, modern Indian imagery. The songs, dialogues, and language of the Hindi film industry influence ideas of family and nation far more than any avant-garde art, literature, or politics. Through decades, Bollywood has played a key role in influencing the common imagination of Indians, particularly the masses — the growing middle and upper-middle class of India.

There was a time in the history of Indian cinema when the expatriate Indian was not shown in a  favorable light on the big screen. For instance, in the movie, Purab Aur Paschim (1970), the protagonist, Preeti was shown as living in London and engaging in very ‘un-Indian’ activities such as smoking, drinking, and donning scanty clothing, which were then looked down upon in the society. The behavior was shown in a negative light and the girl was shown to have strayed away from the correct path of Indian values because of living and growing in a foreign land.

However, the trend of shaming expatriates and their families for their behavior began to change in the nineties with the liberalization of the economy . The Indian media scenario completely changed in 1991 with the arrival of international television. The government’s new ‘‘open skies policy’’ allowed for media audiences to have access not only to several Hindi and regional language channels but also to foreign entertainment programming including the latest Hollywood films. Films increasingly began to depict India’s shifting relationship with the world economy through images of a hybrid relation between the national and global.

Since the liberalization of the 1990s, an increasing number of Indians had traveled abroad, often to visit their overseas family; this diaspora had come to represent an important part of the market for Mumbai film producers. The expatriate Indian or the Non-Resident Indian (NRI) man was now seen as a representative of modern India — educated, suave, fluent English speaker, successful, global, and at the same time, in touch with his Indian roots and values. The NRI women were shown as geographically flexible, moving around with their father or husband, and almost always donning Indian attires — to show they too were fully in touch with the country’s soil. The strategies adopted by the filmmakers to accommodate such expanding audience tastes and desires can be best described as taking global formats and visual styles, while ‘‘localizing, adapting, appropriating, and Indianizing’’ them. Such strategies can contribute to a theoretical framework to better understand the global-local nexus among Bollywood audiences.

To help elaborate my point, I explore two Bollywood movies — Dilwale Dulhania Le Jayenge (DDLJ, 1995) and Kabhi Khushi Kabhi Gham (K3G, 2001). While the two movies were released in different decades and have vastly different storylines, they have some common themes to offer and I focus on one — identity.

Regarded as one of the most successful films of Indian cinema, DDLJ premiered in 1995 and was directed by Aditya Chopra. It starred Shah Rukh Khan and Kajol in lead roles. It involved several paradigm shifts — from showing an expatriate as a hero to stressing the desire of certain members of the diaspora to return to the country to conspicuously showing an underlying faithfulness to Indian values while based overseas. The movie, a romantic comedy, is by essence conservative since it is based on the assurance of a return to a moral and social order.

It was perhaps for the first time, that an NRI (Shah Rukh’s character, Raj) was shown as a hero while the Indian (Kuljeet, the boy Kajol’s character, Simran, was supposed to marry), who had lived in the country his entire life, was shown as the villain. While Raj was shown as a polished Indian gentleman who respected the women around him, Kuljeet was shown as an arrogant young man who was into drinking and shooting wildlife. The former’s moral values were seen as superior to the latter. In a popular scene of the movie, when Simran and Raj spend a night together, Raj’s identity is shown to be that of an archetypal Indian male, responsible for protecting the woman’s purity before marriage. His famous dialogue, “….Simran. Main ek Hindustani hun aur main janta hun ki ek Hindustani larki ki izzat kya hoti hai. Main sapne mein bhi tumhare sath aisi harkat nahi kar sakta” [Simran, I am an Indian and I know what her honour means to an Indian girl. Even in my dreams I could not do something like that to you],links Kajol’s sexuality with that of a nation and reinforces the duty of the Indian diaspora to sustain Indian familial values. Raj, can remain Indian even in migration and defines his Indian identity by his upholding of patriarchal values. This shows that love for and sustenance of these moral standards can be portable.

The movie highlights the yearning of an old member of the diaspora to return to the national fold — the opening scene of the movie shows a sombre looking Amreesh Puri feeding pigeons in London while missing his motherland. While his character is shown to have gone to London for better economic prospects which on the one hand, shows his NRI identity acting as a facilitator between a State-controlled pre-liberalization Nehruvian identity and a post-liberalization open national market, there is another dimension to his identity — the urge to get back to the homeland because the host land never felt his own, even after spending a better part of his life there. Since he had spent his childhood in India, he could not wait to return back to the soil, a passion that was not shared by his daughters who could not identify themselves with the Indian identity that fervently.

The film was directed by Karan Johar and is regarded as another masterpiece of Hindi cinema. It also portrays Shah Rukh Khan and Kajol in lead roles. The female protagonist, Anjali, as a woman, represents India and ensures a religious, symbolic, and geographical continuity while holding together the family living abroad. While living in London, she is always shown to be draped in Indian sarees to ostensibly project her national identity. The akhand bharatiya parivar [undivided Indian family] also symbolizes a new version of akhand Bharat [undivided India, as dreamt by the Hindu nationalists], the stability and perpetual unity of Hindu and North-dominated India even outside the national territory.

Some of the famous scenes of the movie symbolize the fear that Kajol has — her son losing his Indian identity. This makes her force that identity even more strongly on him — be it by singing patriotic songs around him or asking him to never forget that ‘Saara jahan se acha, hindustan hamara’. This subsequently leads to another iconic scene where her son sings the Indian national anthem in his school function which causes the Westerners (shown as visibly white) to stand up in respect. Another running theme of the latter half of the movie focuses on a young brother trying to convince his elder brother to come back to India and rejoin the family. The longing of getting his brother back can be compared to the State’s longing of getting its people back to feel complete as the State can never be complete and diaspora acts as a constant reminder of that.

Diasporas, as other transnational actors, enjoy a privileged status of exerting influence as an interest group in both the homeland and the host land, often affecting the homeland because of influence in the host land. In any case, like interest groups, diasporas may use whatever clout they can to advance their interests. As do other interest groups, they use their financial resources, especially because members of diasporas are usually richer than their counterparts at home. This can be explicitly seen by the fact that all protagonists in these two movies are shown as rich and successful while living abroad which makes them all the more influential and respectable back home.

The NRI is not so much of a role model anymore as they have become one of the normalized figures of Indian society on the big screen, and have been fully integrated into the mainstream imagination of Indianness. This can be regarded as one of the impacts of Bollywood — by showing NRI’s and faraway places on the big screen, it has helped Indians widen their world view and has consequently made the world a smaller place for them. As the former Prime Minister, Mr. Manhohan Singh acknowledged in 2008, in front of Indian Foreign Service probationers, that “the soft power of India in some ways can be a very important instrument of foreign policy. Cultural relations, India’s film industry — Bollywood — I find wherever I go in Middle-East, in Africa — people talk about Indian films. So that is a new way of influencing the world about the growing importance of India. Soft power is equally important in the new world of diplomacy.”, Bollywood, over the years, has done its bit in establishing ideas of national identity and associated behaviors and has also been responsible for changing these normative behaviors of breaking away from it as and when the need arises or the time calls for it. It can be said that Bollywood was tasked with becoming the discernible conscience of the nation and it has managed to do that task. As Dhondy writes, “it was the defining medium of what it meant to be Indian”.

Prachi Jain is a sophomore at Ashoka University. She is majoring in Economics-Finance and pursuing a concentration in International Relations.