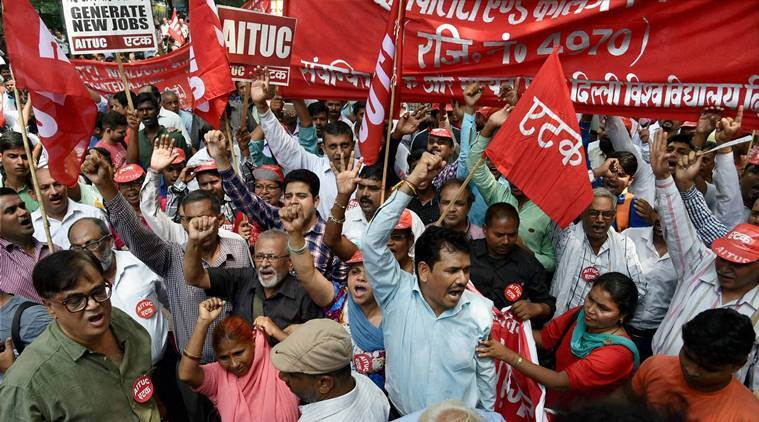 Amidst the COVID-19 confusion, various attempts to restart the economy have been taken. In order to revive business activities and attract investments, multiple Indian states decided to relax and temporarily suspend many labours laws. The UP government has taken the most drastic measures of all states in this matter by suspending almost all labour laws for 3 years (exceptions: Building and Other Construction Workers Act, 1996; Workmen Compensation Act, 1923; Bonded Labour System (Abolition) Act, 1976; and Section 5 of the Payment of Wages Act, 1936 (the right to receive timely wages)). Unlike UP, MP has chosen a more nuanced approach by relaxing many laws. Businesses no longer have to worry about officials knocking on their doors for inspection. Some of the key laws being relaxed are those related to settling industrial disputes, health and working conditions of workers, trade unions, migrant labourers, occupational safety and contract workers. This decision has sparked public chaos and massive retaliation from many organisations, especially trade unions.

The Uttar Pradesh Temporary Exemption from Certain Labour Laws Ordinance, 2020 is a major cause of concern. Labour laws are concurrent in nature, which means states need approval from the Central Government. The fact that the Uttar Pradesh government was given the necessary permission to suspend so many crucial labour laws, is a cause of concern. It raises questions about the Central Government’s allegiance to workers and protecting their rights. Under the ordinance, the Minimum Wage Act, 1948 will no longer be enforceable, hence, workers can no longer rely on government regulation to earn wages that support a basic standard of living. The Factories Act, 1948 ensured the health and safety of many workers in their place of employment, however, this law has also been suspended. The Trade Unions Act, 1926 was also suspended which now undermines the legal powers of a trade union. Due to the contemporary and imperative nature of these laws in a worker’s life, these changes have been termed ‘draconian’ and ‘autocratic’ by many leaders.

As a reaction to these changes, various trade unions came together to protest, with particular focus on the state of the migrant workers that is being made worse by this measure. On 20th May, the unions decided to hit the streets in protest to put forward their demands to the local authorities. This protest was conducted by the Bhartiya Mazdoor Sangh (BMS), an RSS affiliate, to voice concerns and dissent regarding the ordinances and other labour issues, particularly the issue of migrant workers. On 22nd May, another large trade union demonstration took place when 10 Central Trade Unions and federations joined hands to protest against “anti-people and anti-worker onslaughts of the government”. Some of these organisations include the National Trade Union Congress, All India Trade Union Congress, Hind Mazdoor Sabha, Trade Union Coordination Committee etc. These protests voiced dissent against the changes in labour laws and made demands such as having a national registrar for migrant workers.

The source of concern is that by stripping down so many labour laws, there is nothing stopping firms from firing all its workers and re-hiring them at lower wages. This ordinance, in a way, has redistributed bargaining power in the labour market. With high unemployment, firms were already at an advantageous ground, which is made higher with these new changes. Many parties have voiced concerns for dipping wage rates. In such a situation, trade unions would come to a worker’s aid and represent their interests, however, because of these institutional changes, a trade union’s power is also affected.

A major institutional problem with the ordinance is that suspension of multiple key labour laws has reduced the bargaining power of Trade Unions. Trade Unions draw their bargaining power from many sources, such as the number of members, but the legal framework of labour laws gives them the legal prowess to take a legal course of action if needed. With rising unemployment and falling job opportunities, Trade Union bargaining power was already low. Now, without the law to have their back, not only is their power crippled to some extent, but the kind of measures available to them have also decreased. They have fewer options in legal remedies that they can pursue to fight for their members’ rights, leaving them with few alternatives like strikes and negotiations.

On the other side, the government is hopeful and optimistic that the ordinance will improve conditions in the labour market. Post-COVID, many companies that invested in China will be looking to diversify or shift production units. By relaxing the labour laws, the government is trying to attract foreign investment to revive the economy. At home, relaxing regulation and rules should encourage industrial activity and help firms get back up on their feet. In doing so, more employment will be generated due to a higher demand for labour. By increasing working hours and overtime, the government also wants to give more opportunities for workers to earn. If wages do not dip, some workers will certainly be better off. But this still raises concerns for worker safety, health and working conditions. With no legal pressure to provide a safe working environment, the risk runs of businesses exploiting their workers by putting them in dangerous working environments.

There is still a lot of uncertainty about how the effect of these ordinances will play out. Many migrant workers might suffer by being stripped of very basic worker rights, and those dependent on national minimum wage regulation might find themselves poorer than before. But the question arises — would these workers have been better off without the ordinance in a slow and stagnating economy? Or is the cost of reviving the economy going to be paid in very high prices by these workers?

Advaita Singh is a first year student of Ashoka University pursuing her major in Economics.