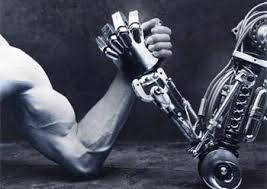 Transhumanists believe in improving the current human nature through applied sciences in order to achieve a longer life span, extended intellectual and physical abilities and probably an increased control over emotions and feelings. They stand for making enhancements widely available while defending human rights and freedom. Their motive is to enhance the human body and mind through technology while taking preventive measures to protect them from its negative and abusive aspects such as bioterrorism. In contradiction to this, we have the bioconservatives who wish to impose a ban on such technologies due to the concern that these will “dehumanize” mankind . They worry that applied sciences will destroy the very element of being human and make us lose our morality and worthiness. (Bostrom, 202- 204).

What this article focuses on, is a conversation between a transhumanist and a bioconservative. Adding up to the above arguments, it provides an  environmental ethical approach in establishing that the bioconservative stance is more plausible.

Ever since the monkey evolved into the man that we have see today, we – humans – have thrived on nature’s resources to survive and grow on and will continue to do so even with further evolution. As we have continued to progress in sciences and become more and more dependent on the growing technology, we have neglected nature and exhibited a myopic and irresponsible behavior towards it. Human activities and developments have destroyed the environment to the extent that it has taken a toll on the lives of humans itself. It is this polluted environment that then breeds diseases and results in the death of countless people. According to the 2015 recorded data, pollution is solely responsible for 16% of deaths worldwide. This figure is roughly three times the number of deaths caused due to environmentally unrelated diseases such as AIDS, tuberculosis and malaria combined (sciencedaily.com). Cases like the Great Smog of London (1952), TVA Kingston Fossil Plant Coal Fly Ash Slurry Spill, the Bhopal Gas Tragedy(1984), and the Shrinking of the Aral Sea are just some examples  of the biggest man-made environmental disasters ever in the history of mankind. These have either resulted in the death of thousands of people or have negatively affected the lives of another set of  thousands by inflicting incurable diseases on them. Though they took place decades ago,  their consequences still prevail, making many people suffer. Bioconservatives believe in imposing bans on such human enhancement technologies that reduce the chances of such man-made disasters from taking place in order to prevent further harm to the environment.

Transhumanists would argue that exploiting nature’s resources is inevitable with the growth in human activities and development and that completely giving up on all forms of human activities in order to preserve the environment is an absurd concept. Therefore, just like the human species has been adapting to the changing environmental conditions in order to survive, we would need to equip ourselves with abilities that do not hinder our growth and progress in the near future. This will be achieved through the introduction of human enhancement technologies and making them widely available so that humans can adapt to the depleting environmental conditions and become immune to the destruction they themselves have caused.

Human intervention in nature’s ways leads to adverse effects, which also extends to the present and the future generations of all species which breed on Earth (Bardzinski, 26). This argument shifts the focus of the debate to the power dynamics played out in the availability of human enhancement technologies. Paul W. Taylor, a philosopher best known for his work in environment ethics, further comments on this section by saying that human beings are “moral agents” and should function according to the needs and interests of all human and non-human living beings, be it flora or fauna. . We have placed ourselves above every other species on this planet. Working towards the prosperity of only a selected species poses a threat to all other species  making it an unacceptable and unethical proposal. Yet, there is no way that these enhancements could be extended to the animal kingdom for the members have no way of expressing their preferences or thoughts on such concepts (Bardzinski, 29).

Evidently, it is clear that the human race is slowly progressing towards human enhancement technologies in order to improve themselves and achieve  “ageless bodies and happy souls” (Kass) but the process of gaining these abilities comes at the cost of the environment which by the end of the day, directly or indirectly, harms  other living beings and puts them at risk.

Vanshika Mittal is a student of Economics and Environmental Science and is currently enrolled in Ashoka University as an undergraduate student.