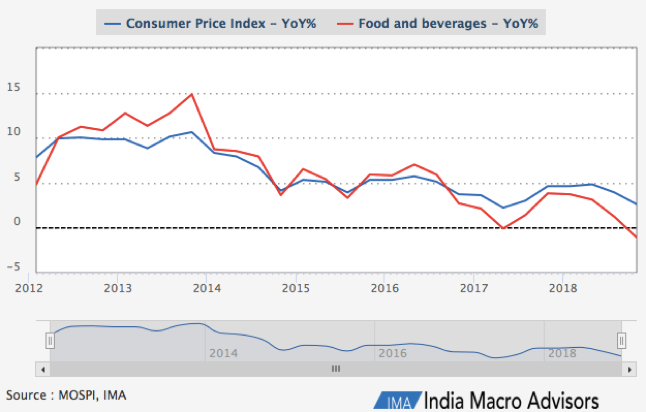 The minutes of the early December 2018 meeting of the Monetary Policy Committee reveal multiple mentions of deflating trend in food prices. Calling it a “downward surprise”, the MPC has expressed discomposure at systematic fall in food prices over the last two years.[2]  As the dual-impact of GST and Demonetisation began to decrease in intensity, the RBI and other economists predicted a rise in economic activity with most sectors of the economy gaining momentum. While the predictions proved to be true for most sectors like housing, clothing, fuel and light etc., food prices continued to show deflationary trends. And the food and beverages index was lower than the overall consumer price index since the beginning of 2017.

It is true that lower levels of inflation are desirable for a robust economy. However, in case the inflation is pulled low by crashing prices of farm produce, especially in an economy where 70% of rural households depend on agricultural income, the trend proves to be concerning.

This article aims to explain the reasons behind this conundrum of low food price inflation in the light of current market conditions and government policies and briefly mention the impacts of the same.

While decline in food prices are beneficial for urban consumers, the impact on farm households is negative to say the least. Economists at HDFC bank claim that the average growth in farm wages has declined from 6.7% in 2016-17 to 3.5% in 2018-19.[3]A wage price spiral, where low prices lead to low wages which further lead to lower prices, could be a future reality. The last few months of 2018 witnessed agrarian distress translate into mass protests by farmers in multiple places including the national capital, New Delhi. The political impact of agricultural distress could explain BJP’s loss of the Hindi Heartland populated by huge farming communities. There could be multiple reasons for the same.

Looking at the supply side factors, a glut in the market (supply exceeding demand by a great margin), could explain the fall in prices. In the backdrop of low global food prices and a normal monsoon, a good harvest could have rendered farm supplies at lower worth in competitive markets. In the first advanced estimate of the year 2019, Ministry of Statistics has estimated GVA (Gross Value Added) at Basic Prices for 2018-19 from ‘Agriculture, Forestry and Fishing’ to grow by 3.8% as compared to growth of 3.4% in 2017-18. Moreover, with election season approaching, promises of loan waivers and interests free loans could have incentivised farmers to invest in a good produce. Despite RBI warnings about waivers destroying credit culture, political motivations have caused various state governments to offer the same. Harish Damodaran, in his article, “The Age of Surplus” for the Indian Express claims that farm produce hasn’t been able to realise value because of increasing production from “Better seeds and faster diffusion of technology”. He blames the entry of India into an age of “permanent surplus” as the cause for regular gluts and price crashes. Advance estimates released by the Ministry of Agriculture give credit to the claim as they predict the food-grain output of India to be 5.3 million tons higher than the previous year in 2017-18.[4]As per the estimates wheat output has been pegged at record 99.70 million tonnes and pulses at 25.23 million tonnes for the 2017-18 crop year and production of Kharif crops at 141.59 million – 0.86 million tonnes higher than last year.

A worldwide trend of lower food prices could explain India’s food price trajectory. In the absence of export demand. The Food and agricultural organisation’s (FAO) food price index revealed marginal dips in prices of dairy, meat, and other farm produce after the startling highs of previous few years. The index was strained at 170.8 points, 2.7% below the previous year’s mark. Soumyakanti Ghosh, chief economist at State Bank of India claims that global food price patterns can definitely impact the value and quantity of exports.[5]However, there are opposing views on the table. Economists at HDFC Bank deem the correlation between domestic and global food prices to be low.[6]Moreover, in the presence of trade restrictions on farm produce, global competitiveness is likely to have lesser impact on Indian farm prices. In fact, S. Narayan, the Economic Adviser to former Prime Minister Vajpayee, declares open markets and free international trade to be the only solution to India’s agrarian crisis.[7]In my opinion, opening farm produce to global competitive markets is the way to go to make prices competitive and expand markets but it cannot be a policy solution for low farm prices. This is so because prices will depend on multiple global factors outside the control of policy makers and are dynamic without the assurance that the increase in volume of trade can compensate for the loss due to fall in prices.

Hikes in MSP in the last few years have been minuscule, keeping the gaps between MSP and actual farm prices low. Recent increase in MSP (from late 2018) by 13% has not yet translated into inflation in prices of farm produce.[8]It can be so that the next dataset of indices by the NSSO reveal certain corrections brought about by the support prices. If not, then it implies that hike in MSP is only visible in theory and on-ground procurement is either absent or happening at prices that are way lower than the MSP.

Quite a few researchers blame India’s farm price patterns to be affected by plentiful imports. A combination of good produce and generous imports dampens the value of the market. The working paper no. 357 by scholars from ICRIER, too, blame imports for falling prices. They claim that, for example, 2016-17 saw record production of pulses (23 MMT) and record imports (6.6 MMT) at zero import duty.[9]Budding imports can add to the increased supply and further bring down prices. It is however notable that India’s response to the US-China trade war has led to a hike in import tariffs to up to 60% for chickpeas and 30% for Bengal gram, which can ease the impact of global food prices on prices of domestic produce.[10]

EFFECT ON LIQUIDITY AFTER GST AND DEMONETISATION

One can also argue that the prices are still responding to the economic frictions brought about by GST and demonetisation. In the absence of mass coverage of the formal financial sector, farm transactions still rely on cash flows which suffered a huge hit in the past 2 years. A recent report by the Agricultural ministry admits that in the wake of loss of liquidity with the farmers about 1.38 lakh quintals of wheat seeds were rendered useless.[11]Moreover, traders’ aversion to cash transactions is causing them to not hold inventory stocks. The stocking limits and the uncertainty surrounding cash transactions are again leaving behind a huge glut in the market, furthering lowering the prices.

As an indicator on the demand side one can look at Private Final Consumption Expenditure (PFCE) to judge whether the fall in prices can be explained using lack of demand. The PFCE (at constant prices), as per the advanced estimates of Ministry of Agriculture, increased by 6.1% in 2017-18 and 8.6% in April-June quarter of 2018-19.[12]A paper titled ‘Taming India’s Inflation’ by Anand et al. at the IMF hypothesised that a rise in real income since 2004 has led to a steady increase in demand of food grain by consumers. If one is to take the rise in PFCE and the paper’s conclusion into consideration, a strong demand size pressure should have driven prices up!

Economist Renu Kohli claims that this paradox could be a result of overestimation of figures by relevant ministries.[13]It could also be the case that there was a stark shift in consumers’ demand patterns with expenditure on other goods becoming more essential than food grains.

She tries to explain the latter point using Milton Friedman’s Permanent Income Hypotheses, that states that a person’s consumption at a point of time depends not only on his past income but also on their future expectations. In this regard temporary fluctuations in income do not reflect in consumption choices. Only sustained changes in permanent income impact consumption demand. Since 2004, household income has shown a strong upward trend with mild aberrations in financial year 2011, 2012, and 2017. If we classify this as an establishment of high permanent income, it could explain the shift in private demand from food items to durables and other sectors like education, housing, etc. It could further explain the lack of demand side pressure on food prices in the presence of increased supply and the discussed deflationary trends.

However, it is important to note that this hypothesis can be successfully validated only by studying future statistical results by ministries as double digit inflation in food prices after 2004 can act as a hindrance in the explanation unless they are explained by other factors.

The paper discussed supply side factors like rise in production capabilities, electoral promises, global food prices, increasing imports, etc. as well as demand side factors to understand the reasons behind low food prices in India. It indicates that policy interventions at micro and macro level are necessary to galvanise food markets into creating sustainable prices for the farmer. The government must choose between structuring its policies such that it targets overall inflation while protecting rural incomes. MSP, loan waivers, and crop insurances are short term measures that can simply delay the crisis without resolving it while also harming other sectors including the credit culture of rural India. The government must aim not let political motivations get in the way of a long term solution for agrarian distress.