This book will generate vastly different responses from its readers, as the readers themselves will be from different spectrums of the society. The book is designed to enlighten the readers about an invisible problem that plagues the job structure in capitalist economies. The author, David Graeber is an anthropologist who looks at the job structure in capitalist economies through the lens of an anthropologist, which serves as a critique of an economic scientist’s version of jobs in a capitalist economy. The book is a collection of case studies where the author has asked individuals how and why their jobs have no meaning. Graeber’s aim is to show that in the greed for being employed, people have lost interest in finding ‘meaningful’ jobs and have accepted the phenomenon of working in dull and mundane jobs. Graeber’s book’s primary focus is to criticize service sector jobs that have become so mundane that these jobs are being valued as lower than being unemployed when it comes to the satisfaction of people. Graeber shows in his work the redundancy of jobs that capitalism has increased, because for capitalists profit is the primary agenda, regardless of the extent of exploitation and the kind of exploitation.

Graeber doesn’t target labor wage exploitation but looks into a more constructivist view of how everyone’s exploitation is different, except for the fact that exploitation occurs is common to all. The exploitation shown in the book is that of the most precious aspect of humans; the mind. Ever since humans have walked the earth, philosophers, scientists and even common folk have always tried to find the meaning of life.

From the Big Bang all the way to the ‘selfie’ mania, humans have tried to decode everything in order to understand the reason of life. Humans have always tried to find and attribute meaning to whatever action they have done. A majority of human life is spent trying to make a living, which is done by having careers and jobs. However, what if this part of life had no meaning to it, and even worse, what if the jobs one did to make a living were made just so there couldn’t be a meaning to them. It’s frightening to think of jobs and careers as having no meaning to them, for this would then question the entire reason for human existence. Whom are we living for, whom are we working for, and why are we even working? Graber’s book tries to answer the uncertainties of having meaningless jobs as he takes a dig at the job structure that capitalism has created. While he doesn’t provide a means to find the meaning in jobs, he proposes to create a level playing field where it wouldn’t matter if jobs have a meaning or not.

Before proceeding further, it is essential to understand what the author means by a bullshit job. After finishing the aspect of education in life, everyone focuses his or her concerns towards employment. The type of employment varies for everyone but the want to be employed is shared by all. This has led to an increasing demand of jobs. Due to the high demand, employers sometimes create jobs that are not valuable to society and are considered bullshit jobs. Bullshit jobs aren’t jobs that people hate, but jobs that are just pointless. Shit jobs are usually not at all bullshit; they typically involve work that needs to be done and is clearly of benefit to society; it’s just that workers who do them are paid and treated badly. But then the question arises, as to why the bullshit jobs are bullshit and in what context are they bullshit? It is true, for the employer the job may not be a bullshit job because it serves a purpose, but at the same time the employee may find the job a bullshit job as it doesn’t add any value to society. Whose satisfaction is to be fulfilled when answering the concept of bullshit jobs? “It is indeed possible to say there are partly bullshit jobs, mostly bullshit jobs and purely and entirely bullshit jobs”. Graeber being an anthropologist is primarily focused on the context of the employees to understand the kind of exploitation they go through. 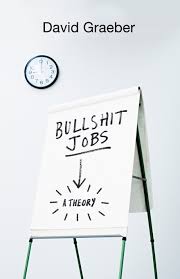 David Graeber gives some very eye opening insights into the exploitative nature of the capitalist world. He clearly shows why sciences also need to be seen through social aspects. The author does a fine job in bringing out the problems out in the open to make people more aware about the lack of value their jobs hold. This in turn can be taken positively as people only need to rely on their bullshit jobs for monetary reasons and can focus on other activities for self-satisfaction. A bullshit job is a pointless job that holds no value to society or the individual that a person has to perform everyday, making it one of the worst kinds of tortures known to man. Graeber’s case studies in this book show the loopholes that capitalism offers. There is no optimal efficiency; rather there is redundancy and costs that cannot be measured in economic terms. As Graeber rightfully puts it, “people regularly report that work is what gives the ultimate meaning to their lives, and that unemployment has devastating psychological effects, yet most people hate their jobs.”

The criticism for Graeber’s views is that considering the ever-increasing population, if bullshit jobs aren’t created then who will create so many ‘meaningful’ jobs? Further, why should there be a need for meaningful jobs, why can’t humans find meaning to life in other aspects rather than in their jobs or occupation. Graeber’s proposal to counter bullshit jobs is very limited in its application, as it is centered towards capitalist societies, which are primarily Western. Only well-off nations can afford to have their population find meaning in their jobs. Nations that are below poverty line or are developing would rather be able to provide jobs to anyone that’s employable, regardless of how ‘bullshit’ the employment is. The author doesn’t question why the employed are unhappy with their ‘bullshit jobs’, because the concept of a bullshit job is very appealing to many.

The book is a must read for anyone who is yet be to employed but has finished higher education or is currently in an institution of higher education, is an employer or deals with the economics of employment. The book is an interesting read and keeps the reader engaged at all sections of the book, forcing the reader to question whether they too are being exploited by capitalism. It is a book that will make me be mindful of the kind of job I will be taking in the future, and while it is not easy to avoid getting a bullshit job, it is good to know that you are not the only one suffering from it. I would recommend this book to any student who is currently pursuing higher education or is thinking of pursuing higher education. Graeber talks of a difference between, “what people should want and people do want”, which is a very important aspect in understanding the human nature.

I request all readers of this book to consider that the mind will always focus on doing what it wants to do, and not on what it should have to do, therefore it is totally up to the individuals whether they would like to remain in bullshit jobs or find ways to improve their occupational meaning. In accordance to Graeber, I would like to conclude that the economic gains one is making should not be the driving factor in jobs, rather the ultimate goal should always be self-satisfaction, because without it we will always feel incomplete and inadequate in our work lives.