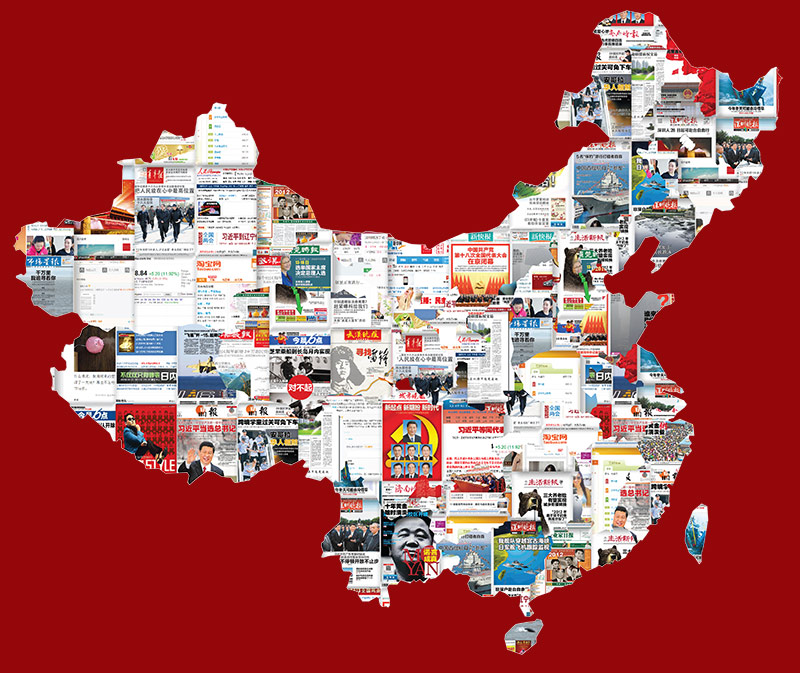 The United Nation’s declaration of Article 19 of human rights in the year 1948, “Everyone has the right to freedom of opinion and expression; this right includes freedom to hold opinions without interference and to seek, receive and impart information and ideas through any media and regardless of frontiers”, clearly implies that freedom of speech, freedom of information and freedom of press emerged out of the Western democratic thought. Different nations have different attitudes and different use of the media and therefore, the four theories of press:

Now, the question to be addressed is why did China pick authoritarian model?

People’s republic of China was established in the year 1948 and is under the control of the party ever since. Throughout thirty-years of Mao’s regime, the next thirty-year period of economic reform under Deng Xiaoping and the current Xi Jinping period the party was able to legitimize its authority despite the drastic political and economic transformations. As the country began to open to the rest of the world it was expected to adopt democratic institutions. The Western thinkers wrongly assume that as countries modernize they westernize. Though China and the Chinese population modernized they still remain deeply rooted in their cultural and traditional beliefs. Freedom of speech and Freedom of information helps empowers individual freedom, however, under the banner of communism society’s best interests overpower that of the individuals. Despite Karl Marx’s argument that censorship is the tool of the powerful (bourgeoisie) to dominate the powerless, China primarily adopted a strict system of censorship in order to avoid collective criticism of the government. China adopted a strategy commonly known as the, “networked authoritarianism.”  Under this system, though there is no guaranteed freedom of individual rights and freedoms, however, individuals experience a greater sense of freedom than under the classic authoritarianism. Any institution that could potentially threaten its authority, the party immediately proclaim sovereignty over it. It aims to silence any form of collective expression but at the same time for the market to operate efficiently they want their population to be informed. Therefore, China makes a trade-off by giving up certain controls in return for better informed citizens. However, the Chinese leaders are undoubtedly threatened that press freedom and civil liberties reduce the odds for authoritarian regimes to survive. This attitude of the Chinese government can be traced back to its ancient roots wherein emperors were referred to as herdsmen and the common people were their livestock. This attitude continues to exist even in the modern day Chinese political structure.

After the end of the cold war, a German Arts organization launched a “Berlin Twitter wall”, in order to set a forum to discuss the end of the war. Instead, majority of posts were in Chinese and the Chinese population used this forum to express their dissatisfaction of their own government. The number of messages on the wall by the Chinese population give a clear indication of how repressed the Chinese people are from expressing their opinion. As a result of rapid economic reform, China has a huge middle class and it continues to grow at a rate greater than many democracies of the world. A growing middle class is a sign of modernity and the Chinese middle class population has developed a huge appetite for information and expression. While the whole world is moving towards improving greater access to information, China is moving in the exact opposite direction. According to the 2014 worldwide index of press freedom (PDF) that was published by France-based watchdog group Reporters Without Borders, China was positioned at 175 rank out of 180 countries. Despite 2,000 newspapers, 8,000 magazines, 374 television stations and 150 million Internet users, Content in China is strictly controlled and monitored by the government.

With the emergence of internet, China introduced “the Great China Wall” and established internet sovereignty.  The period before the Tiananmen square incident, the government allowed greater freedom of media organizations. The government stopped providing subsidies to the media firms that forced these firms to be competitive and efficient in the market in order to survive. Foreign media companies were allowed to enter the Chinese market, increasing the competition in the media market. Chinese journalists had greater opportunities of travelling around the world and there was growing media culture. However, after the Tiananmen square incident in the year 1989, the Chinese government realized that there is a threat to its political survival and therefore focused on three main tasks,

On one hand, media provides information of the problems in the country that the national leaders can use before a crisis occurs, on the other hand they claim that use of cellphones and internet can facilitate collective action that could threaten the party’s survival. The Chinese government adopted censorship and other form of control policies to maintain trade-off between negative and positive aspects of media and at the same time ensure the above mentioned three tasks are performed vehemently.

The Chinese media policy has undergone two phases, the first phase can be referred to as open or re-regulation policies and the second phase is referred to as the control or re-regulation policies. The first phases of policies aimed to expand media capacity and media competitiveness. To increase market access marketization of the media market began in the year 1979 during the first phase of economic form, conglomeration was allowed from the year 1995 followed by capitalization since 2003. Private companies and joint venture companies were allowed market entrance, however, the media contents were limited to accident, corruption disaster and public services. New technologies such as Internet, digital TV and Direct Broadcasting Satellite were introduced into the Chinese economy. During this phase, the basic media services were provided to the low-end social stratus as well.

The second phases of the media policy aimed to re-legitimize control of the media market. After 2001, all the media-outlets were owned by the party. The party held complete ownership and control of the media houses and the content was strictly controlled and in-line with the party’s ideologies. The managerial personnel were employed by the government and popular social networks such as Twitter and Facebook were banned to restrain freedom of speech (MacKinnon, R., 2008.)

Despite the pressures of commercialization, journalistic professionalization, and globalization of information flows the Chinese government was able to establish its legitimacy using the following mechanisms.

The internet first arrived in China in the year 1996 and since then the number of internet user have drastically increased in China. Internet and wireless communication have been leading the telecommunication market in china. China surpassed the United States in 2001 to be have the highest number of telephone users. From using internet for simply e-mail purposes in 1980s to using it for commercial use in the years later, the Chinese government’s attitude towards this information power was changing over the years. In the year 1993, China launched a national information network, Golden Bridge, that connects all thirty provinces and major cities of the nation. However, information is not only desired but also desired to be controlled by the Chinese authoritarian regime. In 1994, China established its first law that discouraged distribution of information that threatens national security. The Tiananmen Square self-immolation incident that occurred in 2001 at the Tiananmen square is a proof how digital revolution can threaten the party’s legitimacy. About 2000 protesters assembled to protests in support of the spiritual movement of Falun Gong. The Chinese government has not seen this as a threat until the protestors lined up in front of the party building. This movement successful mobilized large population using text messages. The so called evil-cult are the followers of Falun Gong wherein the Chinese had access to foreign information via internet and eventually led to short term social unrest. Digital technology was used to form collection action against the CCP, thus threatening its survival. The fact that the majority of the Falun Gong followers were working officials and middle class population, clearly indicates the need for a public forum where freedom of expression is tolerated. And in order to maintain its image, the party blocked all the information on the first Tiananmen square incident and the prosecution of Falun Gong. This brings us to the “Great Firewall” of China, the world’s largest digital system of censorship. At the same time China was able to establish itself as the world’s leader of e-commerce due to Alibaba. China’s “Golden Shield” and “Great Firewall” block thousands of websites deemed inimical to the Communist Party’s narrative and control, including Facebook, YouTube, Twitter and even Instagram. Google is blocked in engine and the Chinese population use Baidu as its replacement wherein information is heavily censored. Weibo is another network that is a substitute for Twitter and Facebook, here the Chinese population is allowed to voice its opinion and is often encouraged to do so. Policy makers and government officials assess the problems of the population based on the content posted on this social media network. Marketization of censorship is another mechanism using which government encourages businesses to develop technologies and outsources the responsibility of creating “block lists”. Unfortunately, the businesses invest and compete to develop better ways of censorship. The party believes that the rise of online public opinion will lead to a political impact which would further lead to societal change (King, G., Pan, J. and Roberts, M.E., 2013.)[9] The Chinese government simply wants to maintain status que and is using measures to restrict any form of collective expression but at the same time is accommodating for their opinions using “Weibo”.

In order to have a better understanding of the Chinese media, it is necessary to understand it through a comparative lens. The Mediterranean Europe, Russia and now china, all adopted the system of authoritarian corporatist. Though these countries are drastically different from China today, they can be compared due to their basic common features. Firstly, all were command economies where state controlled everything, secondly, they highly scrutinized opposition and lastly, all these countries identified media as a means of social integration. However, the trajectories between China and Easter Europe widely diverge because in China, the communist party crushed its opposition and retained power to continue the one party system whereas in the latter’s case, the communist revolutionaries defeated the conservatives and abandoned the one-party system. Similarly, China and Russia diverged into different directions, China is still a communist nation while the latter is not. Despite the difference these two countries can be compared as they shared a common period of communism. The fact that the Russian revolution led to the Chinese revolution is a clear indicator of how the ideologies of both the countries are intertwined. Following are the common features of both the models,

Despite the pressures from the entire world, China is able to successfully control its media and provide alternatives to its growing middle class population to express their opinions. The success of Alibaba and Weibo and the market for cell phones show a clear indication of how successful the Chinese media market is. Chinese political system continues to be influenced by its cultural and traditional routes and therefore any political institution in China cannot be understood using Western theories. Western elites have been tirelessly selling the prospectus to the entire world that freedom of media and freedom of expression is the only way to maintain social order. This prospectus arrives from the assumption that if a country modernizes it westernizes as well. This has been the best-selling prospectus for a long time. However, China’s policy decisions and institutions need to be understood in a very different way. China is not like the west and will not become like the west.

The author, Tejaswini Chepyala, is a student of Jindal School of Liberal Arts and Humanities.