Taiwan and China’s relationship has evolved over several decades and both sides have looked forward to a sense of closure. As is the case for most conflict-prone areas, the concerned parties are unable to reach any accord. The only difference is the status quo which they have derived for themselves was a stopgap, which is haunting both nations thirty years later. The article will review the policy and its implications on the future of cross-strait relations in the region.

During a speech to commemorate the 40th anniversary of issuing the Message to Compatriots in Taiwan, President Xi Jinping called on the Chinese across the Taiwan Strait to “advance the process” toward reunification of China. This statement, made in January 2019, was immediately refuted by the President of Taiwan, Tsai Ing-wen. She responded by saying Taiwan would not accept China’s “One country, two systems”, and neither will the people of Taiwan. She also hinted that Taiwan’s decision is a ‘Taiwan consensus’, implying the 1992 consensus, which Tsai disregards. The current flare-up between the two countries discloses the complex nature of their beliefs and how the scope of the past status quo riddles future diplomacy in resolving the two’s current predicament.

Much of the text provided to explain the severed Cross-Strait relations in recent times is regarding the consensus reached in 1992. Held in Hong Kong, Taiwan set aside its ‘no contact’ policy and agreed to sit across the table with China. Once they did, it was tough to sidestep the elephant in the room: can either decide how to define China? Taiwan claimed that the Republic of China (ROC) was the legitimate head of China, while the People’s Republic of China (PRC) said otherwise.

Neither could move ahead with the talks. The negotiators found a mutually agreed workaround. They established a ‘one-china’ policy—an understanding that both parties considered that only one China exists. The procedure was mindful of the different meanings derived by the two parties. Still, it was essential to eliminate any other framework that China or Taiwan found to be disrespectful. Unfortunately, this circumvention still haunts the present-day ROC and PRC.

Taiwan’s political ideologies have significantly shifted from a nationalist Kuomintang (KMT) to the Democratic Progressive Party (DPP). It was a natural transition that began after the demise of the ROC leader Chiang Kai-Shek, a man responsible for the economic development of the country. Following Chiang Kai-Shek, Chiang’s son and Lee Teng-hui have made strides toward democratising the political framework.

A primary reason for this shift in ideology was the rising Anti-KMT sentiment, culminating in a strong opposition in the form of DPP. The 1992’s consensus was during Lee’s tenure, and once the 2000s rolled in, with the help of other independent parties, the DPP took power for the first

time. In the following years, DPP and KMT were in power, which was concluded by the 2014 student-led protest called the Sunflower movement.

The sunflower movement was extremely quintessential in highlighting the change in the perspectives of the Taiwanese. KMT’s attempt to force the Cross-Strait Service Trade Agreement (CSSTA) without any clause-by-clause review was halted successfully by student-led groups, who accused the KMT of aligning with China and leaving Taiwan in a jeopardising position. The Sunflower movement propelled the DPP to the election victory in 2016 with a full majority, the first party to do so apart from the KMT.

China’s attitude towards Taiwan is conditional on the party in power on the other side of the Strait. Beginning in the 2000s, as that was the first time the DPP won, China began to feel that the new government might not hold up the consensus made in 1992. Even though the new president had no intention of breaking the status quo, the PRC built up an array of threats that justified any form of military aggression by Chinese forces if the ROC did not comply with any. Moreover, China has bullied other countries into severing diplomatic ties with Taiwan. Tensions cooled down once KMT returned to power, with a government willing to trade and hold fresh talks to reopen Cross-Strait relations. This time, China was willing to believe the ROC when they promised that the status quo would be upheld. Taiwan even allowed Chinese investments in their financial markets to reduce chances of conflict. Meanwhile, China kept offering various options for Taiwan to be integrated into mainland China.

When Tsai Ing-wen became president of the ROC in 2016, it became clear to China that Tsai would not uphold the status quo. Since her appointment, Cross-Strait relations have been highly volatile: China has repeatedly begun military exercises and violated Taiwan’s airspace to intimidate the ROC’s stance. The PRC has also taken advantage of trade relations by temporarily banning certain products. The infamous fruit ban in 2021 exemplifies China’s desperation to get Taiwan to bend to its will. Stuck in between them are the people whose livelihoods are in question; they believe maintaining the Status quo is the best solution. 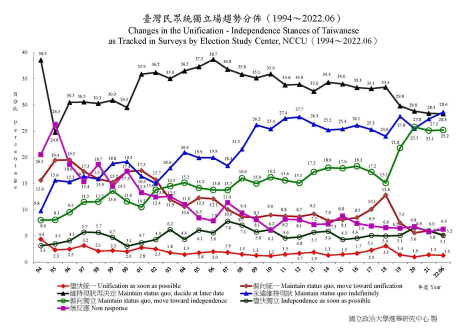 The graph shown above is a clear indication of the general public opinion favouring the maintaining of the current status quo. It is a simple reason why the people would not like to demand independence yet: the consensus worked in favour of the ROC. Trade with China has propelled the economy to grow. Furthermore, China provides additional incentives, such as the absence of tariffs on fruit, for instance, for greater public favouring. China’s belief that trade incentives would change public opinion in favour of unification was unsuccessful. Unfortunately, they are unwilling to hold back by accepting any form of status quo.

China’s president, Xi Jinping, has an agenda too. For Xi, unification is a sign of victory and achievement that none of his predecessors could do. Therefore, he has used several methods to coerce Taiwan into accepting the PRC’s interpretation of the 1992 consensus. The heavily militarized response to Nancy Pelosi’s visit is a trend that will not cease anytime soon. The PRC is also on a mission to resolve this issue before the 100th anniversary of the party, representing a significant milestone in the party’s history. Incidentally, the anniversary eclipses the reunification of Hong Kong, another state unwilling to be integrated into the mainland.

China’s forceful attempts have only pushed Taiwan into a corner, making it more challenging for the public to agree on any deal or offer from the PRC. Irrespective of which party is in the power of the ROC, the most crucial reminder for Taiwan is to enforce the people’s voice into policy.