Will The Costliest Olympics in History Benefit Japan Economically During a Pandemic?

The 2020 Tokyo Olympics will definitely be remembered as one of the most unique Olympics ever. Nicknamed ‘the Pandemic Games’, it took place in a world torn apart by the coronavirus. The Olympics are special to many for different reasons. For a government it might present itself as an opportunity to showcase the country’s development to the world. It might also present itself as an economic opportunity rather than just a sports event. Being the biggest sporting event in the world, it attracts millions of tourists to the host nation for a few weeks. However, along with such benefits, are the huge costs attached to the games. This article tries to analyse the 2020 Tokyo Olympics from an economic point of view. It examines various costs as well as gains that were associated with the games.

The Japanese Public did not want the games to be held

The Olympics took place between 23rd July and 8th August 2021. The games, even though called “Tokyo 2020” had been delayed for over a year due to the pandemic. Japan had relatively low case numbers since the onset of the pandemic due to its mask wearing culture, good health facilities and strict measures. Just prior to the commencement of the games Japan had reported a total of 840,000 cases in a population of 126 million. It had vaccinated only 22% of its population. However, since the emergence of the delta variant daily case numbers have been on the rise. On July 8th Japan banned spectators for the games and declared a state of emergency. Several towns which were supposed to host athletes and tourists pulled out. The Japanese doctor’s union declared it was impossible to hold the games during the current crisis. Asahi Shimbu, a Japanese newspaper reported that 80% of the population wanted the games to be cancelled. However, the games still went ahead.

The “Pandemic Games” were held. Why?

The decision to hold the pandemic games was made by the two stakeholders that had the most to gain from the event – the IOC and the Japanese government. However, only the International Olympic Committee can cancel the games. The games, if cancelled, would have resulted in Japan paying for the losses. Thomas Bach, the president of IOC, said he had spent “sleepless nights” thinking about the games being cancelled and that the games had to go ahead “to give hope” for the future. There is also the fact that the IOC earns billions from the Games. 75% of their revenue comes from broadcasting rights (about $3-4 billion) and another 18% from sponsorship. If the event was cancelled, they would have lost most of this money.

The other angle is that of the Japanese government. Prime Minister Abe in 2013 wished to use the 2020 Olympic games to recreate 1964 like magic. In 1964, Japan wowed the world by hosting the Olympic games. Post-war Japan came out as a technological powerhouse. It showcased skyscrapers, neon-lit skylines, grand stadiums and a futuristic bullet train. It was seen as Japan’s revival in the global order. PM Abe wanted to recreate this economic and geopolitical boom.

Japan desperately wanted this economic revival. Japan, Inc. is the country’s modern, highly centralized economic system and development strategy of export-led growth. Japan Inc., had once changed everything with the Walkman, Trinitron color TVs, computers and new gaming systems. But it now lags behind South Korea in smartphones and memory chips. The Olympic games were seen as a catalyst that would boost the economy and encapsulate Abe’s reform years. Japan could show the world that it had successfully come out of the Fukushima nuclear disaster and the corporate scandals.

Oxford University revealed that the 2020 Tokyo Olympics were the most expensive Olympics in history. The games costed Japan $15.4 billion by official accounts. However, the national audit board of Japan predicts the actual number could be around $30 billion. The one-year delay added $2.8 billion to the final bill. The ban on spectators due to the pandemic made Japan lose $800 million in ticket revenues. The country was expecting around 40 million tourists related to the games. The losses in the hospitality sector hence are in hundreds of millions if not billions.

The government raised $3.3 billion from domestic sponsors like advertisement company Deutsu Inc. Most of these companies feel they have wasted their money as there were no tourists or fans. Toyota, one of the biggest sponsors of IOC, pulled out due to discontentment amongst the Japanese public. The Tokyo 2020 games required new sports facilities to be built as well. 35 sports in the games require very specific infrastructure which can go largely unused after the games. The city of Tokyo itself built 8 new venues. Two of the costliest were the national stadium ($1.43 billion) and aquatic center ($520 million).

This overrun of costs is however not uncommon when hosting the Olympics. The University of Oxford stated that since 1960, host countries of the Olympic games have averaged an overrun of 172%. The Tokyo Olympics is said to have overshot the predicted cost by 111%-244% depending on which official figure you want to believe. These figures vary due to different components being included in the final cost. For example, by some estimates the 2008 Beijing Olympics cost $40 billion. However, this is only when you include surrounding infrastructure costs into the final number. 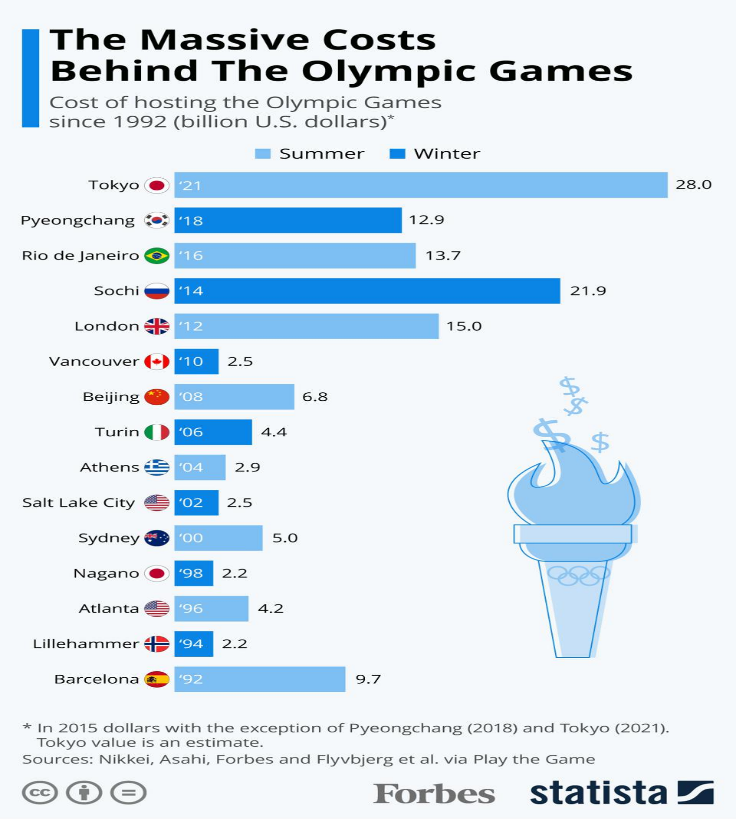 The Olympics can burden a city and lead to an economic crisis. The Athens 2004 Olympics is said to have contributed to the Greece government debt crisis of 2007-08. The cost of the Montreal Olympics of 1976 overran by 720%. This led to the city paying off its debt for the next 30 years.

Benefits of the Tokyo Olympics

Takahide Kiuchi, the executive economist at Nomura Research Institute projected that the gains from the games would be around $15.2 Billion. Many called this projection “optimistic” but it is still far below other rosy predictions. The Tokyo city government, a few years ago, had predicted the economic legacy of Tokyo 2020 to be at $109 billion. While the pandemic and along with-it health restrictions led to most of this economic legacy being ruined, there are some positives.

One of the biggest benefactors of the Tokyo 2020 Olympics economic activity is the construction industry. The total cost of the stadiums was about $3 billion. The Olympic village and surrounding infrastructure cost around $490 million. This helped the industry create new jobs, and stimulated economic activity. Another industry that benefited from the games despite the pandemic was the TV manufacturing industry. The demand for OLED TVs increased due to the Olympics. Electronics retailer Bic Camera told TIME it saw a 30% increase in sales compared to last year. This was possibly due to no fans being allowed inside the stadiums.  The games helped gender equality in Japan as well with many female athletes coming up and winning medals for their country.

Even with the benefits we just discussed, throughout the years, researchers have found no significant impact on income, employment, tax revenue and tourism of the host country due to the Olympics. The costs simply outweigh the benefits. Bidders have been pulling out recently as it is no longer practical economically to host games. In 2015, 4 out of 6 bidders pulled out.

The case of LA 1984 could serve as an important case study on how to bring down costs. LA being the only host city bidder, it could negotiate favorable terms with the IOC and used mostly old facilities to host the games. This made them stick to their budget.

The IOC has played a two-faced role in the past. While it encourages cities to use old venues, it priorities cities which build new ones. Tokyo for example built a special 3v3 basketball court for the games instead of just using a normal court. Some have even suggested building a permanent venue for the Olympic games. This might make more sense economically as well as environmentally.

The case of Tokyo 2020 will always be unique not only because it was held in the most unusual of circumstances but also because it reignited an important debate surrounding the economic viability of the Olympics. Reforms at the IOC are desperately needed should the Olympics start benefiting host cities economically again. The “Pandemic games” might have taught us an important lesson on why the Olympics need to be economically sustainable in the future.

Aviral Anand is a rising second year majoring in Economics and finance with a minor in IR.