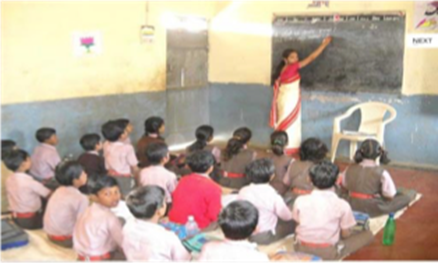 Since its inception, India has tried to be inclusive of all groups of people to be part of mainstream society without disrupting the traditions and conventions of their respective communities. The Scheduled Tribe (ST) population has been a very integral part of India’s demography as they account for 8.2% of the Indian Population (2011 Census). The constitution has established the fundamental administrative framework and the moral briefing for future policies needed to provide for the ST population. However, the educational policies for minority groups such as the ST, have neither been effective in improving the literacy rate nor successful in increasing accessibility to education. The average literacy rate of STs is 58.96% (2011 Census) in India and has fallen behind that of the national average (72.99%) and is even lesser than the literacy rate of the Scheduled Castes (66.07%). Decreasing enrolment rates and high dropout rates throw light on the poor impact education has had on Scheduled Tribes in India.

Experts in the field of education and development have attributed such grim indicators to multiple reasons ranging from geographical immobility to poor school infrastructure. However, another reason that often gets lost in the debate is the medium of instruction. Article 350 (A) of the Indian Constitution provides for education to students in the primary level in their respective mother tongue for linguistic minority groups. However, the predominant medium of language at the primary level remains one of the languages listed in the eighth schedule. Thus, students from tribal communities are forced to engage in a medium of instruction that is foreign to them right from the primary level. This article tries to explore the role of language in educating the scheduled tribes in India.

The Indian constitution has recognized the various tribal populations under ST and protects their rights and autonomy. The constitution has also recognized the need for initial stages in primary education to be carried out in their mother tongue. Article 350 A states that “it shall be the endeavour of every state to provide adequate facilities for instruction in the mother tongue to children belonging to linguistic minority groups.” Regardless of such emphasis on the medium of instruction, tribal students are deprived of intellectual accessibility to education because of the medium of instruction.

The ST population is scattered around the country. The density of population in each respective tribal area is very less and is located in remote areas. Formalizing languages or dialects used by tribal communities is a difficult task as most of the tribal languages do not have a formal script and are expressed phonetically. A system in which academic disciplines are conveyed in their language improves the chances of preserving and evolving the language for future generations. Most states use the majority spoken language (dominant language) as their “mother tongue” and have created a system that caters to the majority language speaker. Assessing this trend at a national level does give regard to the linguistic minorities in the state.

The task of creating a centralized system that could guide education to be provided in languages followed by tribal populations would be a hefty process. The STs account for 8.2% of the Indian population; they speak close to 400 mother tongues. Out of these, 25 languages have speakers of more than 50,000. Santali, Bhili, Gondi, and Khuruk/Oraon are languages spoken by more than ten lakh people. This highlights that only some languages are dominant (spoken by a large group of people) within the category of languages spoken by Scheduled Tribes. The dominant languages in the category of languages followed by the linguistic minorities have not been given proper infrastructure to develop their respective language into a medium of instruction that can be followed in school.

Restricting education in the mother tongue has wider implications. It was noted by Vic Edwards that “the exclusion of mother tongues from school hence is harmful to the child’s self-esteem.” His study proposed that dismissing a language followed by the child would not “enhance the feeling of self-worth.” According to Robert Jeffcoate, students who are fluent in spoken languages “bring to school highly developed linguistic and social skills,” which need to be capitalized for further learning. Mother tongues were actively discouraged by the school system, and efforts were made to make the students learn one of the dominant languages, as noted by Robert Jeffcoate. The over-emphasis on using the dominant languages could be seen as crucial for the cultural assimilation of minorities into mainstream society.

The importance of the mother tongue as the medium of instruction was emphasized in the Dhebar Commission for the Tribal population and made sure that the tribal dialects are developed and preserved. Moreover, the ease of understanding and following lessons would be better if the medium of instruction was their respective tribal dialect. The Kothari Commission suggested that the “medium of instruction” for the first two years be in their respective tribal language. Multiple states in India, such as Odisha, Kerala, and Chhattisgarh, have implemented policies for providing education in the language followed by the tribe. However, this is primarily provided in early schooling, mainly in Anganwadis and lower primary schools in Tribal Areas.

Odisha has been ahead of the curve in providing multilingual education up to class 5.  Academy of Tribal Language and Culture, in collaboration with Scheduled Castes (SCs) and STs Research and Training Institute (SCSTRTI), has prepared supplementary reading material up to class 3 for 21 languages Santhali, a widely spoken tribal language in Odisha, which is used as the medium of instruction in more than five hundred primary schools. Chhattisgarh and Kerala have implemented this in Anganwadis in tribal areas. Efforts for implementing the constitutional direction for imparting education in one’s respective mother tongue is being carried out in the mentioned states; however, this initiative is not seen across all states that inhabit tribal populations that do not speak or follow the popular or official language of the state.

In mainstream society, parents want their children to attend private schools because they offer English as the medium of instruction. This is evident from the fact that 14% and 19.3% of those who were enrolled in private schools in rural and urban areas, respectively, chose a private school because English was the primary medium of instruction. The STs are primarily located in remote areas where English is not used commonly. If the students from tribes are exposed to a “foreign language,” it would affect the advancement of their learning. DP Pattanayak noted that “where multiple languages and cultures co-exist, the notion of one dominant language as the medium of instruction leaves thousands illiterate in their mother tongue and fosters low achievement level in the dominant language itself.” If schools used the respective mother tongue to teach children, it would engage them not to drop out with the progression of each grade.

In a country like India that occupies multiple cultures and languages, one language dominating learning and education as a medium of instruction can leave many illiterates. As the dominant language is being learned by those who are foreign, it fosters inefficient learning. The conflict between mother tongue and dominant language leaves the aspiring learners from the scheduled tribes as casualties.

Arjun Sujit Varma is an undergraduate student at the Jindal School of Government and Public Policy with a keen interest in Political Science and Macroeconomics.