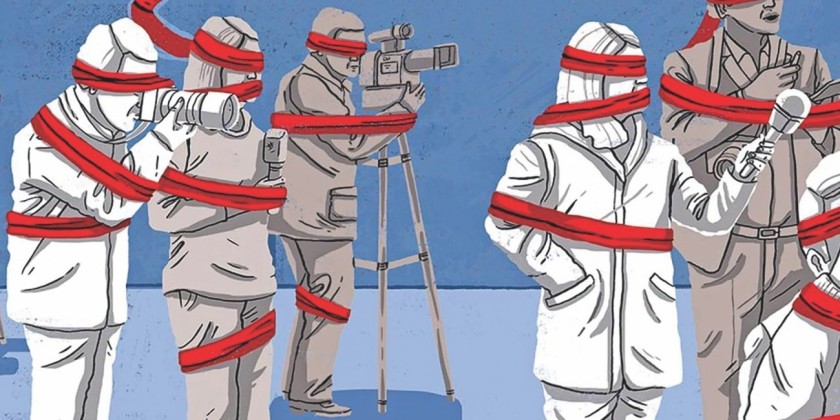 At the end of the Cold War, when liberal democracy vanquished and rose above totalitarianism, nobody imagined that one day it would find itself weakened and battered, the way it is today. For fourteen consecutive years, according to ‘Freedom in the World’, countries that suffered democratic setbacks outnumbered those that registered gains. States that a decade ago seemed like promising success stories are sliding into authoritarian rule, powerful democracies are mired in intractable problems at home, while those already in the stronghold of authoritarianism only seem to be slipping deeper and deeper. This article aims to understand the effect of the pandemic on democratic backsliding, and why those countries that are classified as ‘Partly Free’ are more prone to this plague.

Democratic backsliding, meaning the state-led debilitation or elimination of the political institutions sustaining an existing democracy, has plagued the 21st century only to be worsened by the COVID-19 pandemic. Ever since its outbreak, the condition of civil rights has degraded across the globe. Governments seem to have taken this opportunity to abuse their power and silence those who spoke against them, often overlooking the central problem of public health.

Steven Livitsky and Daniel Ziblatt, professors of governance at Harvard University, have studied the possible impact that crises may have on democracy. In their book, How Democracies Die (2018), they say that the combination of a would-be authoritarian country and a major crisis can be deadly for democracy. Countries which are often toeing the line, or cannot be classified as full democracies, struggle to allow their democracy to flourish in the face of major crises. These are the countries that first revert to their old authoritarian ways. They believe that citizens are more likely to tolerate – and even support- authoritarian measures during security crises, especially when they fear for their own safety. Even democratically elected leaders can easily concentrate power and threaten liberties during war, or war-like scenarios. Crises are a great opportunity for demagogues-in-training, who were previously obstructed by constitutional constraints, to dismantle the current system.

While coronavirus is not necessarily a war or war-like scenario, it has definitely spiralled out of control enough to be called a crisis. The countries classified as ‘Partly Free’ are the ones who are having difficulty in allowing their democracy to flourish. Based on a survey of 398 journalists, civil society workers and experts, accompanied with research on 192 countries, Freedom House produced a report to examine the evolution of democracy during the pandemic. There were three aspects that were highlighted in the Freedom House report as the pallbearers of modern-day democracy: abuse of power, the debilitating conditions of marginalised communities and the state of digital freedom.

Not only has democracy weakened in 80 countries, but the problem is even more significant in nations that seem to be struggling to remain democratic, nations who have the weakest safeguards against abuse of power.

Among the respondents of the Freedom House survey above, 27% reported governmental abuse of power as one of the three aspects most affected by the outbreak. Freedom House research found evidence of police violence against civilians in at least 59 countries. Most of the violence occurred in less democratic settings, with 49 percent being Partly Free countries. Detentions and arrests linked to the pandemic response were noted in at least 66 countries, including 49 percent of Partly Free countries. The high rates of abuse of power by security forces in Partly Free countries indicate that the active position that the so-called democratic government claims to hold often crumbles under crises and that governments very conveniently resort to using violence to control the public. The safeguards and checks that these governments are supposedly meant to have in place to avoid such acts of abuse, are not powerful enough to withstand crises.

The pandemic is also accelerating the decline in global internet freedom. In this era when practically everything has shifted online from education to trade to politics, the digital footprint of an average citizen increased exponentially and so did one’s digital oppression. The globe experienced a decline in digital freedom in three key areas – blocking of independent news channels online to limit free flow of information, increased surveillance and intrusive technology, and lastly, announcing complete shutdowns or banning particular applications. A similar trend was noted even here; out of the 5 countries that observed the biggest 1-year decline in Internet Freedom, 3 were Partly Free countries (India, Ecuador and Nigeria). Rwanda which had one of the biggest 5 year decline was pushed down from being Partly Free to Not Free in 2021.  Evidence suggests that the government uses sophisticated spyware to monitor and extort dissidents.

Parliaments and judiciaries have been crippled by health restrictions and emergency laws. Moreover, these bodies no longer remain apolitical and unbiased as they should be, and are often manipulated for political purposes. 39% of the countries (out of which Partly Free nations yet again formed a great percentage) said that meetings of the national legislative assemblies had been cancelled or postponed indefinitely for the larger part of the pandemic. Such abuses at the hand of the government reflect its fear of losing power rather than reflecting the confidence it may have in its own strength.

The effect of abuse on marginalised communities is even more egregious; among the experts that were surveyed, 29% mentioned the lack of protection for minorities and vulnerable populations were some of the biggest problems faced. In some countries lockdown measures were solely applied to specific segments of the population in a blatantly discriminatory manner. In Kuwait, authorities put greater restrictions on movement on non-citizen neighbourhoods than on areas populated majorly by citizens. In Colombia, ethnic minorities had to completely withdraw into the confines of their own homes, often finding themselves at the mercy of local criminal groups from whom the security forces did not provide protection.

Governments and mainstream media have also continued to pin the blame on marginalised communities for spreading the virus. Indian Muslims were labelled ‘superspreaders’ and were often at the receiving end of vicious hate from the country in response to an Islamic gathering at the start of the spread of the pandemic. Muslims in Sri Lanka were also bound to a similar fate. Not only were they blamed for the spread of the virus, but also not allowed to cremate and conduct burials even when the World Health Organisation had deemed it to be acceptable.

All these are Partly Free countries where the government seems to have more power in framing the narrative against a particular group of people that more often than not form the minority in the nation. Even the democratically elected leaders jumped at every opportunity to circumvent the checks and balances created by the constitution. Evidently, their governments had prejudices against particular ethnicities, and they did not hold back from discriminating against them. The pandemic allowed them to outrightly disregard the rights of certain groups of people without a shred of accountability.

Leaders across the world, regardless of how they were elected, have failed to be honest about how the pandemic has affected their nation. The third aspect which has been affected most by the pandemic is transparency, or the lack thereof. A 62% majority of Freedom House survey respondents said they distrust what they are hearing about the pandemic from the national government in their respective countries. From outright denial of the virus, until very late, in Turkmenistan and Nicaragua to promotion of unsafe or unproven treatments in Brazil and Tanzania, leaders of Partly Free nations managed to cover it all. Corruption thrives when transparency declines; a phrase that captures the condition of our world since early 2020.

As the pandemic continues to drag on, public attention will inevitably turn elsewhere, allowing even further abuses of power by such leaders to go unchecked. Partly Free nations which previously acted on the international pressure to maintain their democratic nature do not appear accountable to those stakeholders anymore. The growth of these democracies has not only been brought to a screeching halt, but has been pushed back by years.

Yasashvi Paarakh is a first- year student at Ashoka University, majoring in Economics and Finance and hoping to minor in Political Science. Her research interests lie in studying the ramifications of religious interference in the modern political arena across the worl