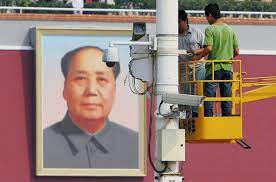 In December 2017, in a demonstration set up to display the effectiveness of their public surveillance system, Chinese authorities took less than seven minutes to identify and apprehend prominent BBC journalist John Sudworth through its vast network of CCTV cameras and advanced facial recognition technology. When Sudworth’s chase was orchestrated, China’s network of surveillance cameras totaled around 170 million. According to estimates, this number is expected to have reached 626 million by the end of 2020.

AI-driven surveillance technologies such as the Chinese state’s surveillance system are increasingly becoming common in developed societies across the globe. However, its rapid proliferation and well-documented employment as a tactic of suppression and social control merits an investigation into the wider causes behind this rapid proliferation.  What do China’s domestic efforts in mass surveillance and use of data-dependent technologies like Artificial Intelligence (AI) mean for the world? What role have social and political developments played in the development of the Chinese surveillance state? In an attempt to answer these questions, this article will evaluate China’s surveillance system, the Chinese government’s pursuit of AI supremacy and its impact on the world through two major theoretical paradigms: Realism and Constructivism.

Artificial Intelligence and the ‘Great Firewall’ of China

While the adoption of technologies such as Artificial Intelligence (AI) is a recent phenomenon, mass surveillance has been a regular feature of Chinese society for more than three decades. Since China’s first foray into the internet in 1989 and its subsequent technology boom during the 1990s and 2000s, the Chinese state has exerted solitary control over internet services and a significant influence over the activities of domestic Chinese technology companies. Through this iron-clad control of Chinese cyberspace, the state purported propaganda which emphasizes the primacy of the Chinese Communist Party (CCP) in building Chinese enterprise and curb all dissent. Simultaneously, through its influence and extensive investment in domestic technology firms, the state has also advocated digital self-reliance, in an effort to decouple from the US-centric internet governance model.

These efforts have yielded China its own heavily regulated digital ecosystem complete with private technology firms and services such as Baidu, Weibo and WeChat which mimic open platforms such as Google, Twitter and WhatsApp (all of which are banned within Chinese cyberspace). Coupled with legislative security provisions, the state’s close relationship with homegrown firms allows it unrestricted access to data within the Chinese firewall, which it utilizes to develop better AI algorithms and thus improve the state’s surveillance system; the system which have been used to curb dissent, subjugate large swathes of minorities, implement an Orwellian social credit system and also develop technologies with military applications. The COVID-19 pandemic has only accelerated the growth of the Chinese surveillance state, with officials now collecting private information from both individuals and corporations on the pretext of health security.

A Realist explanation for the Chinese surveillance state:

Resting on the assumptions that states are the primary actors in international relations and that the international arena is inherently anarchical, realism (though it has variants) suggests that states are constantly engaged in a global zero-sum game for power and security amongst each other.  Since states cannot rely on anyone for help, they are forced to practice ‘self-help’ in order to secure themselves. Furthermore, states can never be certain about other states’ intentions. Therefore, every course of action that states undertake serve the function of increasing their relative power and influence.

From a realist lens, particularly that of ‘offensive’ realism proposed by scholar John Mearshimer , China’s surveillance state can be interpreted as an effort towards securing a global hegemony in AI technology. In recent years, the Chinese government has formulated extensive plans to bring the country to the forefront of global AI development. Most prominent among these is the 2017 New Generation Artificial Intelligence Development Plan which is aimed at helping China achieve global leadership status in AI by 2030. The report emphasizes how the most developed nations in the world “are taking the development of AI as a major strategy to…protect national security” and that China should “seize the strategic initiative” and work “to create [a Chinese] competitive advantage” in AI in order to protect national security. The strategy already seems to be paying off. According to estimates, China now has the world’s second-highest number of AI firms and around 48% of the world’s AI venture capital funding. The report, authored by Chinese strategists writing for a Chinese audience of bureaucrats and politicians appears to reinforce the offensive realist belief that powerful states such as China seek to maximize their power at the expense of others in order to dominate global politics.

The offensive realist argument is further strengthened by the fact that China is now exporting its surveillance system to authoritarian regimes across the globe in a bid to secure prominence and power internationally. According to a report published by the Carnegie Endowment for International Peace, Chinese technology companies have sold artificial intelligence-powered surveillance technologies to 63 nations across the globe, many of them under authoritarian regimes. For poorer nations like Kenya, Laos, and Mongolia which normally would not have enough resources to make the purchase, the Chinese government provided soft loans as assistance. The consequences of such exports are dire. Chinese loans are often predatory in nature and require refinancing, which is when the Chinese state pushes customer nations for concessions such as network access. This gives the Chinese government access to valuable datasets to further develop its artificial intelligence technologies to improve surveillance capabilities and thus, consolidate its power and influence over the global AI regime.

Given its explanatory power, realism and in particular Mearshimer’s brand of offensive realism sense enjoys favour among analysts and government officials in analysing the Chinese surveillance state.  Yet, there are pertinent criticisms of the approach. A consistent line of argument against the realist perspective is that in defining relations between states in terms of power alone, realists necessitate that states act on “worst-case assumptions about the other’s intent”. In doing so, it crucially overlooks factors such as the role of historical processes and international norms in shaping Chinese identity and worldviews, which in turn influenced Chinese national interests.

Social constructivism, another prominent theory within the discipline of International Relations, provides an alternate perspective for understanding China’s surveillance state. Rather than assuming states act only in fear of counterparts and the interest of gaining power, constructivists argue that states make decisions based on “probabilities [which] are produced by interaction”.  This means that states act towards objects (fellow states or non-state actors) based on the “meanings that the objects have for them”. Since ideas of the other become essential to predicting or explaining behavior, anarchy becomes what states make of it.

Unlike many other mainstream theories of international relations, constructivism allows for the consideration of multiple factors which influence state actions. One of these is the historical process of identity formation. Present-day China is a proud heir of one of the world’s oldest civilizations, which once boasted tremendous technological capability and made influential contributions to global civilization. However, that prominence gradually lost due to multiple historical factors. In its narrative of history, the Chinese Communist Party attributes this loss of prominence largely to the ‘Century of Humiliation’, a period between 1839 and 1949 during which China was subjugated and exploited by both western powers and the Japanese Empire. Given China’s negative interactions with western foreign powers early in its modern history, the historical process of identity formation therefore makes it possible to view China’s surveillance state as the CCP’s response to preemptively deal with external threats, and its distribution to countries around the world as a means of exporting, thereby certifying Chinese ingenuity.

The constructivist classification of a social act can further help explain the emergence of the Chinese surveillance state. According to scholar Alexander Wendt, repeated interactions “rewards actors for holding certain ideas and discourages them from holding others”.  This is to say that continued interaction, whether positive or negative, helps shape actors’ perception and understanding of their counterparts. Even after gaining domestic legitimacy, the Chinese Communist Party regime has been involved in contentious relationships with powerful western liberal democracies due to the western powers’ suspicion of the CCP regime. Western suspicion of China, whether justified or not, continues to this day and reflects in the language used in official documents and by diplomats. To give an example, the United States National Security Strategy of February 2015, the last such report to reflect a cooperative tone with China, mentions that the US would insist that China “uphold international rules and norms” on maritime security, trade and human rights, and that it would “closely monitor China’s military modernization”; issues including some which the CCP regime considers infringements on its domestic sovereignty.  It is not then implausible to argue that the CCP-led regime has interpreted western liberal democracies’ suspicion and refusal to treat China as an ‘equal’ as a signal challenging its sovereignty, and thus preferred to respond to it through indigenous development of critical technologies such as AI, as opposed to relying on the west for critical technological support.

However, the constructivist approach too draws criticisms. Prominent among them is the argument that constructivism offers states little in the way of an enduring approach to dealing with friends and rival nations, unlike counterparts such as realism which propose specific doctrines of state action. Since meaning is determined from interactions between states alone and interests can change at any time, there remains a constant uncertainty in how states will react to situations.

The continued growth of the field of artificial intelligence invites new technological innovations and therefore a constantly active space for conflict and cooperation in the realm of international politics. Such technologies harbor the potential to do much good for people across borders. However, national interests threaten the process of collaboration over such technologies. Through an exploration of the Chinese surveillance system, this essay demonstrates that both Realism and Constructivism, while they possess some limitations, offer valuable theoretical insights in understanding how China’s national interests can be evaluated. Examples present in this study highlight how contrasting multiple factors of analysis can aid analysis. However, questions still remain. Does one perspective serve better than the other in analysing China’s surveillance system? Will combining the two paradigms produce more accurate results? Or is neither adequate? How bureaucrats and the governments of the world respond to China in the years to come will tell.

Kartikeya Reddy is a second-year undergraduate at Ashoka University, majoring in Political Science with minors in Computer Science and International Relations.