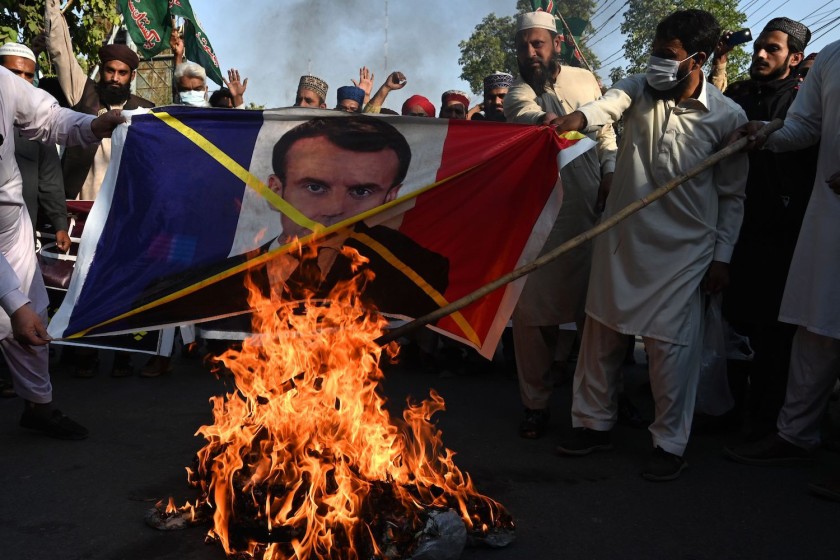 France, during the recent past has shared an unsteady relationship with Islam, and the issues like the beheading of a schoolteacher over some objectionable cartoons, debates around burqa and controversial Charlie Hebdo cartoons are proofs of the same. In October last year, Samuel Paty was killed by an 18-year-old student for showing caricatures of Prophet Muhammad in class. Paty has since then come to embody the French idea of laïcité or state secularism, and has been hailed as a ‘quiet hero’ by none other than the President himself. This incident has deepened the divide between French secularism and Islamic radicalism, which has been simmering for decades.

The present interpretation of laïcité, however, is beginning to stand more for discrimination rather than neutrality. An article in the New York Times brought an interesting observation to the fore: ‘Muslim students may not wear head scarves, but some schools hold Mass every day, and nearly every French state holiday is a Roman Catholic holy day.’ Similarly, while churches and synagogues are public property and funded by the state since before laïcité came into effect, mosques are deprived of funds as per the 1905 implementation.

Besides, French insistence on state separation from religion has led to the alienation and marginalisation of French Muslims. In 2004, the country banned headscarves and other ‘conspicuous’ religion symbols in French schools, sparking immense outrage. This decision was followed by a ban on face-covering Islamic veils in 2010. It was seen by some as a deliberate measure taken to marginalise Muslims.

Add to this the unsatisfactory social-economic conditions of the French Muslims and controversial statements of the French government against Islam, and we shall begin to understand why these Muslims often feel alienated in their home country. A correspondence test highlights the following fact: a Muslim candidate is 2.5 times less likely to receive a job interview call-back than is his or her Christian counterpart, and another survey disclosed that ‘second-generation Muslim households in France have lower income compared with matched Christian households’.

Moreover, French Muslims and Muslim immigrants have consistently faced discrimination, shown by the unemployment and poverty rates that are three times higher than the national average, and an annual income thirty percent lower. In his controversial speech, Macron declared Islam to be ‘in crisis’ all over the world and attacked Islamic separatism by accusing it of wanting to destroy the laws of the Republic and create a parallel society. Apart from this, Macron had previously expressed his idea of creating an Islam of France, which would be free of radical thoughts and behaviour that, according to him, was behind the attacks on French innocents. His ‘stigmatising’ statements deeply offended the Muslim community in France.

Historical Context: The Evolution of Laicite and French Church-State Relations:

One of the main aims of the French revolution of 1789 was to limit the power of the Catholic Church within France. The institution was closely allied with the monarchy and controlled vast amounts of property. Hence, the secularism and religious freedoms defined by the French Parliament of 1789 were distinctly individualistic, as they were defined in confrontation with the Catholic Church. Further, due to the political affinity of the Church with the monarchy, around 3000 clergymen were executed during the Revolution. The French Revolution, while dealing with citizens, sought to identify them principally as French and hence, relegate their religious beliefs to the realm of the private sphere. This was evident through the Republic’s proclamation around the emancipation of Jews in 1791: “We must grant everything to Jews as individuals but nothing as a nation.”

Yet, the Revolution was not successful in dismantling the hold of the clergy in the public life of France.  Even after, the alliance between the Church and the monarchy resumed until the formation of the Third Republic in 1870. But after the failure of the revolution, the emphasis of the French state shifted from restricting the public aspect of religion to rather controlling and compromising with the religious institutions. Clergymen of the prominent branches of the Church as well as Jewish rabbis became the employees of the French state and remained so until 1905, when the law of separation of the Church and the state was passed by the French government.

Formation of the Third Republic provided the Leftists and the Republicans to challenge the Catholic clergy and conservatives, who were severely opposed to secularisation. This conflict between the Catholic clergy continued well into the 20th century before the Second World War. While presently the Law of 1905 is seen as the harbinger of strict separation of church and the state in France, historically it accommodated various religious interests by providing for chaplains in schools, hospices, army and the prison along with provisions for maintaining the religious monuments built in France before 1905. Thus, the 1905 law should not be seen as a sharp break that led to the receding of religious symbols from the public sphere of France. The present meaning of laicite has roots which are much different from the Law of 1905.

During the Second World War, support given by the Catholic church to the Vichy regime established by the Nazis made sure that the conservatives were marginalised from the power structure. There was no vehement opposition by the conservatives to secularism, as enshrined with the 1946 constitution. The present contrast between what is understood as the Anglo-Saxon form of multicultural secularism and French laicite started emerging only after the war.

While French secularism is frequently understood in terms of strict separation of religion and state, its manifestation does not preclude state from interfering in religious matters to ensure freedom of conscience. This is made evident through the Debre Law of 1959 which provides substantial financial assistance to private religious schools that enter into contract with the state. This makes it easier for parents who want their children to have religious education to afford school. Moreover, as mentioned above, before the Law of 1905, French state tried to regulate religious authority rather than combat it. Even after 1905, in their colonies the French tried to influence their subjects with the aid of religious institutions (both Christian as well as Muslim). Famously, the French state had built a mosque within Paris in 1924 to commemorate the role played by its Muslim soldiers during the First World War.

Hence, trying to understand French secularism strictly in terms of state vs religion or combative secularism vs multiculturalism, would inevitably lead to simplistic binaries that reflect little of the historical genealogy of current debates taking place in France. Rather, one should try to look at how state regulation of religious institutions within France has tried to mould its French citizens into ideal citizens through the use of a ‘French civil religion’. Hence, one can place President Macron’s recent statements around formulating a ‘French form of Islam’ free from ‘foreign influence’ within a specific historical context of France’s history. Presently, the lack of a centralised religious authority among Muslims has been one of the primary challenges that France’s policy towards its Muslim population faces.

Hence, this threat of ‘foreign influence’ and ‘Islamic separatism’ as expressed within France emanates not as much from Islam and an individual’s private religious beliefs but from the French state’s inability to regulate Muslim institutions within its borders that can mould Islam into a civil religion of French preference.

Albania: A Model to Emulate

In contrast to this charged atmosphere, Albania in the same continent has emerged as a beacon of religious tolerance. A 2011 census placed the percentage of self-declared Muslims in Albania at approximately 56.7 percent, making it one of Europe’s only Muslim-majority countries and a testament to the coexistence of Islam and European values. The key to understanding this complex situation might be in the country’s past. After the Second World War, Albania was ruled by dictator Enver Hoxha, whose communist regime was notorious for its strict control and mercilessness.

Under Hoxha, Albania became an atheist state with no religious affiliation. Having or expressing religious beliefs was prohibited, and it became shut off from the rest of the world. These circumstances of ‘shared adversity’ may have prompted a culture of religious tolerance. Moreover, today, most of the Albanians live outside of Albania, in countries like Yugoslavia. Albanians have, according to Kosta Barjaba, a predisposition to ‘share their destinies with the non-Albanian populations of Albania’, as a result of their tumultuous past.

Many believe that freedom from this regime led to this unique atmosphere of harmony and tolerance. Churches and mosques often line the same roads, and religious events are attended by people from all faiths. Inter-faith marriages are very common. The country recently played host to Pope Francis, who regarded the inter-faith harmony and ‘mutual respect between the Muslims and Christians’ as a ‘precious gift’.

Albania thus stands as a model to emulate for the other countries of Europe, especially for France. Secularism should imply religious harmony rather than becoming another strained idea that contributes towards a volatile society. French Republic has been changing the meanings of laicite as per the political imperatives of the time and the present conditions might just warrant the same re-examination of the concept. The case of Albania is illustrative of the folly of solutions that conceptualise the current unrest within the paradigms of clash of civilisations and inability of Islam and European civilisation to coexist.