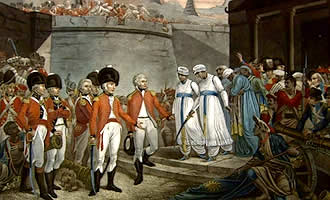 Geography versus Institutions. This historically polarising debate on the central determinants of economic development has been nothing short of an intense, at the-edge-of-your-seat boxing match — every jaw-breaking punch followed by a quick recovery and a harder comeback. While both the leading hypotheses superficially offer equally strong arguments, like the boxing match, there is only one winner… the Institutions Hypothesis.

The institutions hypothesis argues that the course of development is primarily charted by human influences and the organisation of society. Good institutions — property rights, controls over inequality of power and wealth in society, and equal opportunity — by encouraging investment, technological and human capital developments will lead to long-term development in a country. In contrast, the geography hypothesis maintains that the climate and the forces of nature to be primary determinants of poverty and development in a country.

The supremacy of the institutions hypothesis is intuitive. Institutions establish an economic framework for the functioning of markets and the allocation of resources. Good institutions are the drivers of development that create an environment for economic activity using private property, equal opportunit, and controls over inequality which is why they are the main determinants of development.

The geography hypothesis has become weaker because of the redistribution of the value of resources. Earlier when agriculture was the primary source of income/economic activity, factor endowment might have been important for prosperity. However, today, agriculture’s contribution has diminished, it is less dependent on natural resources and more on infrastructure like irrigation. Hence, technology and industrialisation are taking credit for the largest share of the pie. What influences them? You guessed it: institutions.

Moreover, the geography hypothesis implies that in the long-run, development is beyond the human scope of intervention i.e it is predetermined and cannot be changed. That itself should fire up alarms and red flags. History is witness to the great influence human intervention has had on development. Case in point: The reversal of fortune.

Countries that were relatively poorer before 1500 AD witnessed a surge in relative prosperity after European Colonisation. For example, in 1750, Indian per capita industrial production was higher than that of the US. Over the next two centuries, the US overtook India, as shown below. Findings by Acemoglu, Johnson, and Robinson indicate that this reversal of fortune can be explained using the institutions hypothesis. Colonisation led to an “institutional reversal”. In relatively poor countries, colonisers introduced property rights that bred an early environment for equality, hence, most people had access to basic income, education, and healthcare leading to higher productivity, industrialisation and entrepreneurial spirit. According to Robinson, “the interactions between institutions and the opportunity to industrialize during the nineteenth century played a central role in the long-run development of the former colonies”.

Consider India, one of the many former colonies still reeling from the shocks of colonialism. The British Raj left India setting many legacies, unfortunately, the education system is not one of them. The colonisers did not establish any formal education system. Some states had traditional methods but education largely differed from state to state. This can be explained using the institutions established during British India.

During colonial rule, the transmission of institutions was through the 3 Land Tenure Systems: Zamindari, Raiyatwari, and Mahalwari. Places that were colonised early, like Bengal and Bihar, had the Zamindari system which became the reason for poorer educational infrastructures. This is because the British found it easier to raise rents and taxes in non-landlord areas, as per Banerjee and Iyer. Higher rent provided them with some surplus to invest in schools, railways, and roads. Therefore, after their departure, some states were better off than the others, including their educational set-ups.

Post-independence, the government was not very successful in removing the discrepancies in education across states because, under Zamindari, there was no relationship between the peasants and the British administration; landlords would underpay the workers, thereby breeding an environment of high persisting inequality. This created a social order with gaping chasms between the elite and the peasants that impacted the state politics for decades to come. The growing class conflict resulted in rebellions and peasant uprisings. According to Banerjee and Iyer, this meant that the political energy of the state population was aimed at demanding a redistribution of wealth rather than focusing on public goods, infrastructure, and education. This is reflected in their data: “landlord areas had 21 percent fewer villages (15 percentage points) equipped with primary schools, while the gap in middle school and high school availability are 61 percent and 63 percent, respectively”.

As per the 2019 ASER report, states like Bihar and West Bengal are lagging behind states such as Maharashtra. This can largely be attributed to the persistence of history and the lingering effect of land tenure systems. What deepens the cause for concern is that even within the landlord states, social fragmentation alongside caste, class, and gender leads to huge inequalities in educational attainment.

The problem of access and homogeneity in education is going to be aggravated post-pandemic as online uninterrupted education has been a luxury. According to Business Insider, only 24% of Indian households own a smartphone while a meager 11.5% have computers and internet. Hence, for a majority of students, particularly those from lower socioeconomic backgrounds, the educational journey will be fractured.

Post-COVID, India needs to ensure that the fault-lines of society and the backlog of history do not cost certain children their future. This means investing in quality education. Firstly, short-term programs need to be introduced that ensure that students who had a year-long gap in their education are prepared to go back to school (i.e revision classes, critical thinking skill development, etc.). In the long-run, while the mid-day meal scheme was a reasonable success, conditional cash-transfer schemes can also be used (as followed in Morocco) to encourage attendance.

With the NEP 2020, an improvement in early education is expected as pre-school education has been inculcated in the formal learning years, but to derive the most of this policy, early and timely enrolment in schools should be encouraged through public advertisements, local workshops, or even legal mandates. It is also important to train teachers well for the smooth execution of the policy’s bilingual teaching method. Vocational training and internships under the NEP are good reforms as they will focus on skill development, but they will require investment in government schools by the state to ensure proper implementation.

With the accelerated integration of technology in education post-pandemic, the government also needs to start building on the technological infrastructure to prevent increasing disparities in private school and public school education. In the long run, the building of this digital infrastructure will include resources in schools (computers, internet, smart classes), focus on IT in curriculums, stable network access across the country, and trained teachers who are equipped to maximise the benefits of technology.

With a massive youth population, India has the advantage of a good labour supply. But to extract the most of it, there has to be human capital development. Similarly, India has been blessed with good factor endowment; fertile land, suitable climate, etc. But are these ingredients enough for India to be a developmental success? Like any baker will tell you, “it’s not about the ingredients, it’s what you do with them”. And that is exactly why institutions are central to long-term development.

Advaita Singh is a second year Economics and Finance student at Ashoka University.