There is little wonder when the topic of gender inequality surfaces. Women are socially, economically, politically, and even culturally discriminated against, in different degrees all around the globe. Addressing the role of gender discrimination in economics, gender inequalities supplement market inefficiencies that further hinder the growth of an economy. Backed by literature and statistics, this paper offers a wide view of the interaction between female labor and markets. This paper aims to present the adverse impact of gender discrimination on market efficiency of an economy.

‘Women make up almost half of the world’s working-age population of nearly 5 billion people. But only about 50 percent of those women participate in the labor force, compared with 80 percent of men.’ There are ample explanations that elucidate under-participation of women in the labor market but through an economical lens, this under-participation is seen as misallocation of resources. The alternative to not working in the labor market for women is to indulge in unpaid household activities. This might sound absurd and oversimplified, but it is quite close to the reality. Socio-cultural norms assign gender roles to women where they are expected to look after the children and the household forcing them to withdraw from the labor market. Furthermore, according to the 2016 Monster Salary index report, in India, women earn 25 per cent less than men. As depicted in the graph below (Figure 1), all around the world, there is a gender pay gap. 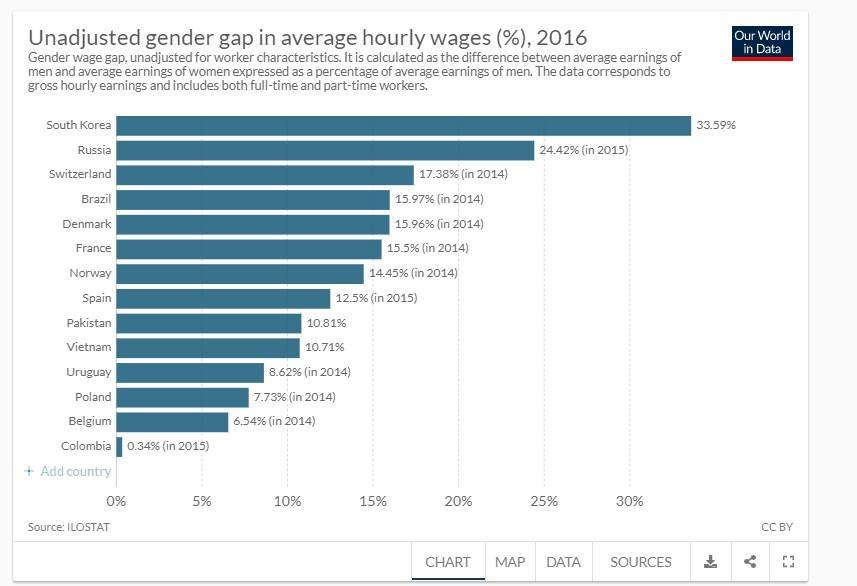 Due to the wage gap between men and women the opportunity cost for not working is lower for women which can be a possible explanation to the overrepresentation of women in the unpaid household sector. This dynamic is what causes the inefficiency in the market that further hinders growth.

For further explanations, this paper presents a simple model (Figure 2) to demonstrate inefficiency in the economy caused by discrimination in gender depicted through a wage gap. The y axis marks output and the 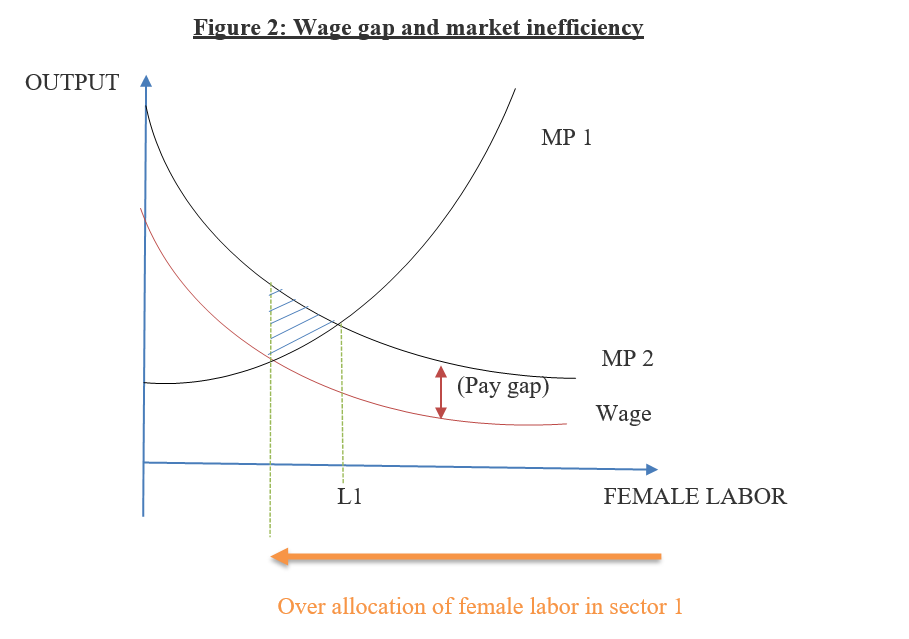 sector 2 is under allocated and sector 1 is over allocated shown by the orange arrow. The shaded triangle represents the loss of output in the economy. That loss of output is what leads to economic inefficiency hindering the growth process of an economy.

To simplify the model, this paper makes a few assumptions listed below:

According to the IMF, the unpaid service provided by women in terms of childcare and household responsibilities were estimated to ‘range from 10 percent of GDP in advanced economies to more than 30 percent in South Asia and in the Middle East and North Africa.’ Such a huge chunk of services are unaccounted for while calculating the GDP; thus it is fair to assume household service as a contributor to the GDP

There is a lot of literature and research that supports the model (Figure 2) made in this paper. While the diagram (Figure 2) plots the dynamics between female discrimination in context of wage gap and the resulting inefficiency, there is research that proves that it is indeed the case.

In Becker’s research paper, he models barriers to female labor force participation in the following equation:

The gap between the marginal product (MVPf) and wage (wf) offered by employers to women is due to the discrimination against women. That discrimination is quantified and thus can be seen as a tax on female employment (1+ Tj); j denoting a marketable sector. For reference, we can study Figure 3 that measures the barriers to female labor as tax equivalents for different regions in the world. The shift in the curve for MP2 (Figure 2) attempted to capture a similar phenomenon diagrammatically. It is the gender discrimination that is quantified as tax which prevents the wage from being equal to the marginal product; the main reason for market inefficiency.

Canada’s growth in GDP epitomizes the relationship between female labor participation and growth. Canada has been actively promoting females to participate in the labor market since 1976. 35 years down the line, 75 percent of female labor participation has increased leading to a remarkable increase in the output of the economy. Since 1976-2015 female working hours increased by a growth rate of 1.7 percent annually, contributing to about 30 percent of the overall output growth.

In fact, more research shows that if gender barricades are removed and women are given more opportunities to participate in the labor market, especially in the developing economies where the gender pay gap is wide, there is a possibility that the GDP will grow up to 35 percent, on  average. As depicted in Figure 3, female participation in the labor market boosts productivity benefiting the economy by generating more

output. Additionally, gender diversity in the workplace induces a larger chunk of gains in regards to economic welfare as well. 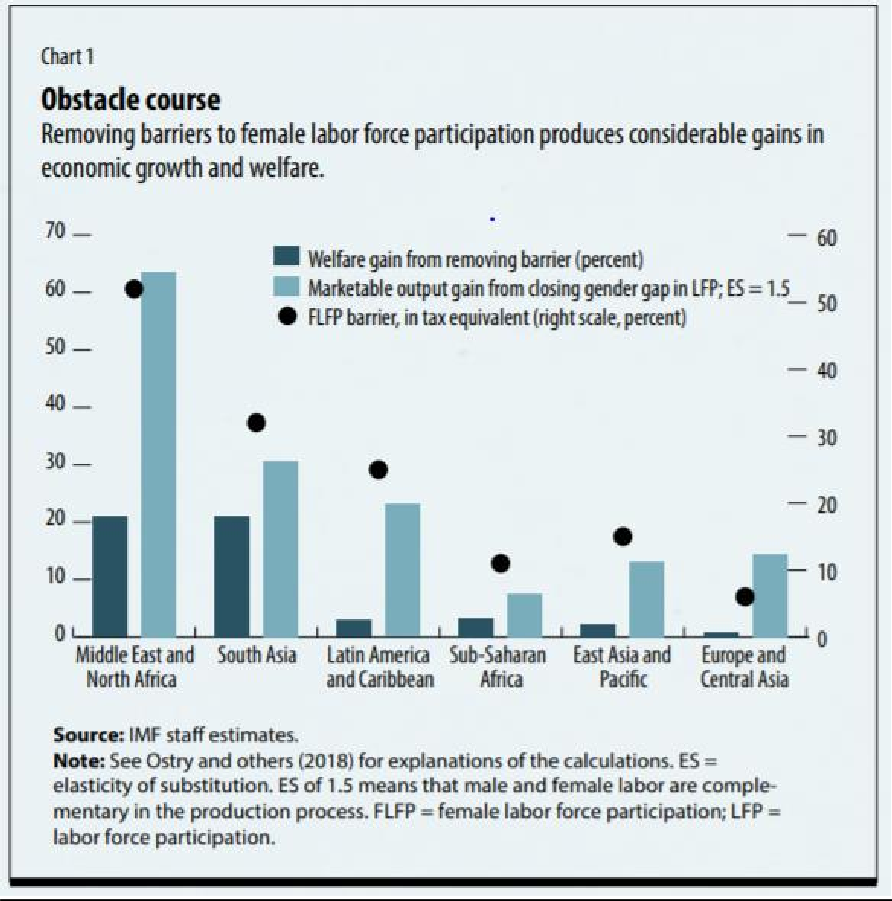 This paper has attempted to show the inefficiency caused due to the prevalence of gender discrimination in the economy through a simple model. However, there are more complexities that need to be accounted for in an in- depth understanding. The fact that the model considers all female laborers as perfect substitutes to one another may not be the accurate representation of gender bias and the corresponding wage gap. There are many intersections with regards to gender discrimination based on their caste, identity, culture, poverty or color that
are ‘double disadvantageous’ to the economy and catalyze the market inefficiency to a greater degree. For instance, an African American woman may be discriminated against with regards to both her gender and her skin color which may widen her wage gap in comparison to a man and a white woman. Furthermore, women do not have access to basic resources like education to imbibe the skill set required for a job in the formal sector, limiting their choices at work. ‘IMF research suggests that female labor force participation would rise by 2 percentage points if Indian states increased education spending by 1 percent of GDP.’ Societal norms and stereotypes related to gender restrict mobility of female laborers narrowing their labor participation. Caste, creed, society, politics, customs and communal beliefs all interlink with the economics of the country and are facets that need to be examined as well.