Impoverished children feel the brunt of the pandemic in myriad ways — the parents’ financial battle, lack of access to education, and importantly even food for the underprivileged. Many are led into the pit of malnutrition as they battle hunger. This is a threat to the economy, a threat as ghostly as a recession. It is high time to understand and respond to the nutritional insecurity that evolves when integral areas are sidelined.

The investment in education has rewarded the nation immensely. It is good to recollect that, aware of the nexus between education and nutrition, the country had policies in place to tackle them simultaneously. “If I go to school, will you give me food to eat? I can learn only if I eat.”, said a shepherd to Kamaraj, the then Chief Minister of Tamil Nadu who incepted a novel program—Mid-Day Meal scheme—in Tamil Nadu in the 1950s.  Later, on 15th August 1995, the centrally sponsored National Programme of Nutritional Support to Primary Education was launched to provide cooked mid-day meals in government and government-aided schools. Supported and strengthened by the Right of Children to Free and Compulsory Education Act, 2009 and National Food Security Act, 2013, the scheme has been upgraded to become universal. It covers all states and was extended to upper primary schools alongside assistance to meet the cost of cooking.

The scheme is lauded for having made impressive progress in increasing the enrollment rate, attendance, and improving the nutritional level among children. As per the government data, in the year 2018-19, the MDM scheme served about 9.17 crore children in 11.35 lakh schools across the country.

Nevertheless, the pandemic has deprived many government school children of the blessing to have a full, healthy meal. Conscious of the significance of the scheme, the central government had instructed states and Union territories to continue the scheme during lockdowns and summer vacation. Cash transfer, dry ration, and home delivery of cooked meals were the suggested means.

Further, the budgetary provision for the MDM scheme increased by a good 11% from the previous year. While for the financial year 2019-2020 the revised allocations stood at ₹9,912 crores, 2020-2021 saw a rise, with ₹11,000 crores being allocated for the MDM scheme. Additionally, in response to the pandemic, by the end of April, the center made an increased provision of ₹8,100 crores which were allocated to meet cooking costs. This was a 10.99% increment from the old allocation of ₹7,300 crores. To guarantee smooth distribution ₹1,700 crores was allocated. 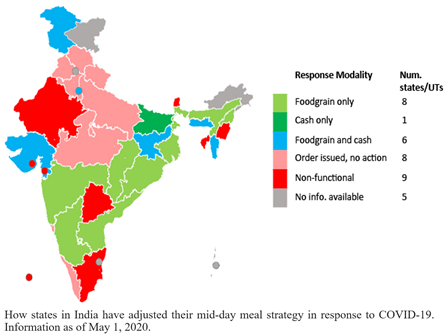 In light of this, foodgrains and cooking costs have been disbursed by Madhya Pradesh, Uttarakhand, Odisha, and Gujarat; Andhra Pradesh, Chhattisgarh, and Karnataka supplied cooking oil, soybean, and pulses along with food grains instead of transferring cooking cost. 1.29 crore government school students of Bihar have in total received ₹373.70 crores through bank accounts. 66% of the beneficiaries from Delhi received the April-June transfer worth ₹5.22 per day for primary and ₹7.83 per day for upper primary students. Chhattisgarh confirmed that dry rations reached the students during the first 95 days of lockdown. Gujarat took a different route by providing students with ration coupons that they could barter for grains at the PDS outlets. Rajasthan, which started late from June 11, distributed dry rations to parents for the 94 missed days. In a span of 18 days, 89% of the eligible ones were aided.

However, the negligence of some states who have delayed active response is a shock. Although the scheme is centrally sponsored, it is the state governments that regulate its implementation. As of May 1, only 15 out of the 36 states/UTs had responded to the call. Until July 10, states like Uttar Pradesh, Tamil Nadu, Telangana and Goa did not take any initiative. On the bright side, hardly a few states are yet to act as of today.

Furthermore, the central government and state governments have provided free additional rations to all ration cardholders. While these were relief packages, they were  not short of discrepancies. The Pradhan Mantri Garib Kalyan Anna Yojana, which was rolled out in the wake of the lockdown, has been underperforming recently. Statistics for the month of July showed that 40% of the beneficiaries could not avail themselves of the free grains from the center.

Despite such arrangements, the reality is saddening. A child rights NGO ‘Save The Children’ conducted a need assessment during the pandemic in which across 15 states, 7,235 families were surveyed. Two-fifth of the households reported that the children did not receive benefits from the MDM scheme. Also, 40% of the people did not have access to adequate meals. While it might be true that the states have been devoting all resources to contain the virus, it does not justify the inaction.

During the pandemic, it is important to make health and nutritional services COVID-19 sensitive. These essential services should reach beneficiaries undeterred, through a safe platform. The progress of the disbursal must be monitored and tracked to ensure that the recipient’s life is truly changed.

In this time of crisis, dismissing the nutritional needs will take the country back in time. Malnutrition has seen a significant dip over decades now. But the pandemic is likely to reverse the positive trend. The COVID-19 induced food insecurity and malnutrition deaths are certain to increase, because of many such facilities that are disrupted.

All these direct the spotlight on one crucial question: how effective are our policies? India has made remarkable progress over time, thanks to many policies that have been rolled out for the benefit of the citizens. However, the question of effectiveness remains. How well the increased provisions are being transferred to the needy end should be monitored. Unbiased and uncorrupted channels must be laid out alongside strong policies. The success lies in ensuring the effective implementation of every policy.

Author Bio: Gby Atee is a second-year student at Ashoka University pursuing her major in Economics.