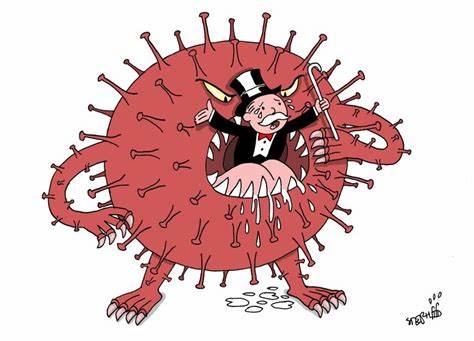 The terms ‘pandemic’ and ‘capitalism’ are used quite regularly in contemporary media. However, both of them can be traced well back in time. The idea of a pandemic can be traced back to 541 CE with the spread of The Plague of Justinian. The capitalist theory seems to start building with Adam Smith’s ‘Wealth of nations’ but the idea existed even in 13th century Europe in some shape and form. Although it might be counterintuitive, history has reiterated the interconnection between the ideas of capitalism and pandemics. To understand this link, one must adopt an ‘Anthropocentric’ approach to these words. Humans appear to be the underlying denominator of both, pandemics and capitalism. A brief peek into the history of pandemics and capitalist ideas would help in establishing this common denominator and thereon in investigating their relation.

A pandemic is an infectious disease spread over a very large region. The Plague of Justinian is believed to be one of the earliest and deadliest pandemics recorded in history. The plague made a return 800 years later, around the mid-14th century to be known as The Black Death; killing with reckless abandon. About 200 million people were decimated throughout Europe and Central Asia. More recently, the world saw the advent of the Spanish Flu in 1918, infecting about one-third of the global population in three waves. While the current COVID-19 pandemic is rampaging all around the world human lives and livelihood are being destroyed. Pandemics act as an enormous external shock to the ‘Capitalist Order’, on which most economies operate today. The Capitalist Order or Capitalism is rooted in Smith’s idea of ‘individual liberty’ as in his book, ‘The Wealth of Nations’. In theory, capitalism is an economic system based on three interdependent fundamental institutions – private property, firms, and markets. Markets are formed by firms coming together and firms stem from the idea of private property. These institutions are operated by individuals or organisations managed by individuals. This human-centric or anthropocentric approach to pandemics and capitalism establishes a correlation between them and makes it important to understand that relation for the sustenance of humankind.

Institutions of Capitalism in a Pandemic

The idea of private property is simple and intuitive. It is a property or thing over which one exercises their own free-will, uses it in any way they deem fit, may exclude others from its use, and can dispose or pass it on to someone else, who then gets its private ownership. Real estate is a classic example of private property. Intangible property, such as feelings, livelihood, or exercising own free-will to carry out an action is also considered as private property. The COVID pandemic has left the idea of private property in grey. Private properties such as hotels, schools, etc, are being turned into isolation centres and corona-care wards by local authorities. Disruptions due to lockdowns have led to individuals losing jobs or receiving pay-cuts, lowering income, hence lowering their purchasing power. Fear and uncertainty about the spread of the virus has forced households to reduce consumption against their will and economies all over the world experiencing dips larger than the 2008 recession. Necessary control measures have curbed their free-will to step out of the house anytime they want. Similar disruptions were observed during the Spanish Flu on the imposition of quarantines and stricter control-measures owing to a lack of advancement in medical sciences.

A firm is a legal entity, distinct from members composing it, which is established to transact business. It has legal rights like any other individual. It carries out a multitude of processes in transacting business. A pandemic has a great effect, often negative, on these business processes. The supply chain of the goods or services offered by the firm is disrupted. A pandemic worst affects a firm’s human capital. Workers don’t come to work and often, production units are shut down by the authorities to curb disease spread. Paying workers without any output becomes a costly affair, increasing the variable cost of doing business, leading to downsizing. While re-opening, firms are mandated to install and provide protective equipment to employees which are an added expense. Such harsh business conditions force several medium, small and micro enterprises (MSMEs) and on-margin operations to shut down. This has a terrible impact on the economy and local distribution networks. During the Spanish Flu, crops were destroyed because farmers feared going out to harvest. Sanitation departments were shut and the garbage piled up on the streets furthering the flu spread. Wars have been lost due to the inefficient production of resources to fight, by a specific society facing a pandemic at the same time. These reiterate the importance of firms in a capitalist system and how badly they are affected by pandemics.

A market is a place where firms come together to buy or sell goods and services. When the buyers’ willingness to pay for a certain quantity matches the sellers’ willingness to accept, a transaction takes place at the said price. This depends upon the supply and demand of that particular commodity. Any change in either side or an exogenous factor can change this market equilibrium. Pandemics act as an exogenous shock to most markets. This is because of its human toll and disruption of the supply chain of firms as described earlier. Moreover, a pandemic highly reduces the demand for products that are not essential for survival. Restrictions on movement disrupt the day-to-day activities upsetting the market equilibrium. Investors lose their confidence in the financial markets, leading to stock market crashes and other fallouts. Several contemporary examples illustrate a pandemic’s potential to tank even well-developed market economies.

The Neo-liberal and Globalised World in a Pandemic

A Neo-liberal world is characterized by free-trade and the power of efficient markets. Through successive waves of globalisation, the distance between states and economies has reduced drastically. This has transformed the world into a close-knit community. Foreign products are readily available in local markets and often at a cheaper price and better quality, increasing consumption. Pandemics disturb the normalcy of fundamental institutions of capitalism, destabilising this close-knit community, resulting in economies taking a hit, leading to recessions which may even last years. Some blame globalisation and reduced distances for the expedited spread of coronavirus. Howbeit, there are pros and cons to this system. Despite the damage done, economies are showing signs of recovery. Increased government spending, foreign and local investments, rising stock indices show that the economic downturn triggered by the pandemic may not last very long. Pandemics are external shocks that are internalised and the efficiency of the market structure seeks to recuperate the economy.

In conclusion, there appears to be a deep relation between pandemics and capitalism. An anthropocentric viewpoint helps establish this. Pandemics adversely affect humans and in turn the capitalist order. They cause shifts in the intricate network of economies. Eventually, through sustained efforts, reorganisation and reengineering of capital flow through market forces and some governmental intervention, things return back to normal overcoming the disastrous effects of a pandemic. The nuanced relationship between the two is what keeps the humankind thriving and growing.