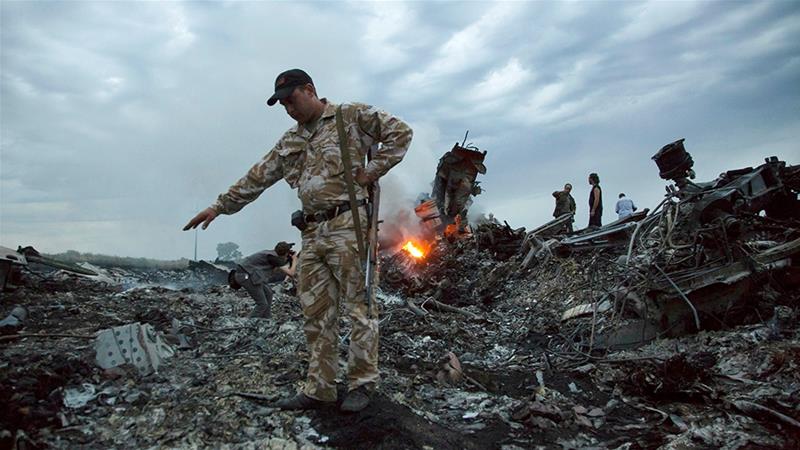 International Criminal Law is a category of Public International Law that concerns itself with a group of actions and atrocities that are involved in crimes against humanity, human rights violations, and the violation of International Humanitarian Law. These acts include crimes of aggression, war crimes, as well as genocide. These crimes are considered so gruesome and of direct effect to the international community as to occasion the intervention of the International Community.

The Malaysian Aircraft, flight MH17, had departed from Amsterdam bound towards Kuala Lumpur, with 298 passengers as well as 15 crew members, all of different nationalities. The aircraft was found crashed in Hrabove, Ukraine. The Donbas People’s Militia controlled this region. An inquiry conducted by the Dutch Safety Board showed that the plane was hit by a Buk missile, destroying it, while killing all members of the crew as well as the passengers on board. This essay shall analyse the state responsibility of the different countries that were involved, either directly or indirectly in the downing of the aircraft. Further, the individual criminal liabilities of the various individuals will be considered. Finally, an examination of the State of international criminal law will be done, with recommendations on what can be improved.

The principles of State Responsibility examine the circumstances in which a state will be held responsible for the breach of an obligation imposed on her by an international treaty or statute. For a state to be held responsible for any action or omission, three requisite elements must be satisfied, as exemplified in the Articles of the International Law Commission (ILC). Firstly, it must be satisfied that the breach of the duty must be attributable to the State in question. Since the State does not exist as a physical being and does not act on its own, the action must be inextricably linked to an individual or a state organ that can be considered to have acted on behalf of the State. Generally, any act or omission done by a state organ is attributable to the State, whether executive, legislative or judicial, as long as the organ or individual was not acting as a private citizen. The actions of a person who are ideally under the control of the State are also attributed to the State. Unsuccessful or ongoing insurgencies are considered acts of private individuals unless the State can be deemed to have acted negligently in not suppressing the insurrection. The principle of territoriality must also be satisfied to attribute an act to a specific state. This is to say, an act is attributable to a country if it occurred within the jurisdiction of the State, whether within its territorial waters, earth surface, or its airspace. Secondly, it must be established that there exists an international legal obligation in force between the states involved, which has been breached.

The shooting of flight MH17 occurred in Eastern Ukraine, which is within the airspace of Ukraine. Article 9 of the Chicago Convention of 1944 on International Civil Aviation explains that “…each contracting State may, for reasons of military necessity or public safety, restrict or prohibit uniformly the aircraft of other States from flying over certain areas of its territory.” Therefore, Ukraine was under an obligation to inform or prohibit any flight from flying over its airspace. This obligation was not exercised. However, before liability can be imputed to Ukraine for this omission, it is essential to consider whether Ukraine had reasonable grounds to believe that any aircraft over the region would be subject to any danger. As stated above, the aircraft was shot down by military-grade equipment. Therefore, the test Ukraine has to be subjected to is whether they knew, or ought to have known that any aircraft flying over the region was in imminent danger of being struck down by said equipment. If this is satisfied, then, the second element required to satisfy state responsibility will have been met. As Ukraine has, in its administrative structure, an organisation that is charged with the obligation of handling matters concerning aviation, the omission is indistinguishably attributable to the Ukrainian State. For this reason, the first element has been satisfied.

It is important to note that the report provided by the Dutch joint investigation team identified that the missile system that was used in bringing down the aircraft belonged to the 53rd Anti-Aircraft Missile brigade which is based in Kursk, Russia. This allegation has been denied by the Russian Federation, which stated that the accusations were intended on discrediting them in the eyes of the entire international community. However, if the allegations were to be proven, it would mean that Russia, as a state, could be held responsible. This responsibility would arise in the event that it can be satisfied that the missiles were in Ukrainian territory owing to their affirmative act, omission or negligence.

Owing to the nature of crimes prohibited under International Statutes, individuals charged with crimes under International Law are often charged as a group or corporation of a large number of people. However, this does not negate the necessity of analysing the individual criminal liabilities of every individual, since individuals work together in performing the acts prohibited under international law. Article 25 of the International Criminal Court Rome Statute provides that the court “shall have jurisdiction over natural persons.” This is to say; the ICC is not limited to body corporates engaging in criminal acts. Further, the article emphasises that individuals who commit crime, whether as part of a group or at his own accord, shall be liable for the act individually. It is noteworthy that individual liability does not affect the responsibilities of different states, as discussed above. The legality principle of criminal law that is nullum crimen sine lege and nullum poene sine lege are also applicable under International Criminal Law. The Rome Statute provides for the class of crimes within its jurisdiction, under article 7. As is the case under local law, the prosecution must establish mens rea (guilty mind) and actus reus (guilty act) to hold an individual accountable for a crime under international law.

It is within the reach of International Law to try individuals for omissions to act in the standard expected of them. Ideally, liability only arises under omission where the law puts a specific obligation on the accused party to act. In the same vein, the principle of superior responsibility applies. This principle provides that where a superior individual who fails to “prevent or punish his subordinate’s criminal acts may be held criminally responsible.” Thus, high ranking officials should ensure that their subordinates act within the confines of the law.

In order to establish liability for the omission, several elements must be proven. Firstly, there has to be a duty to act, as stated above, the obligation must be breached, and finally, the breach must have a causal connection to the harm suffered. Placing this criterion against the case of flight MH17, the prosecution must first identify the individuals who were placed under an obligation to provide information as to the possibility that harm may befall an aircraft flying over the region due to the insurgencies. Since it has already been established as provided under article 9 of the Chicago Convention, the individuals identified had a duty to inform any aircraft flying over the region of any imminent danger. The duty had been breached as the closure of the air space was done after the plane was shot down. No information was provided beforehand. If the downing of the aircraft can be attributed to the failure of the Ukrainian officials to act, then they will be individually liable for the damage.

The International Criminal Law framework, more specifically, the International Criminal Court has had numerous criticisms levied against it. Firstly, it has been alleged by many African states, as well as other third world countries, that the ICC is hell-bent on punishing individuals from weak and poor states while leaving the criminals from wealthier nations untried. This bias, as stated by several African nations, has contributed to their lack of trust on the ICC to perform its various roles. This led to Kenya calling for the member states of the AU to opt out of the Rome Statute. Another criticism against the ICC is procedural practices. The ICC has had the practice of engaging in numerous procedural activities which has adverse effects on the dispensation of justice promptly and efficiently. These procedures, while essential in ensuring efficacy in its functioning, limits its ability to perform its obligations to all the member states.

The limitation to the jurisdiction of the ICC has also been a question to consider. Its limited jurisdiction often limits the ability of the ICC to perform its duties. Therefore, it will be in the interest of international justice to make several changes to that effect. Further amendments to the Rome Statute that increase the jurisdiction of the court, while taking care not to interfere with the sovereignty of different states should be done. This will increase the effectiveness of the court to perform its roles.

While the criticisms have merit, it is worth noting that for the ICC to be effective in performing its duties, the member states of the Rome Statute must pull their efforts together. Take the case of the South Sudanese President, Omar al-Bashir, as an example. Even though there was a warrant of his arrest in operation, he still was able to visit countries like Kenya, China, Egypt as well as several Middle Eastern countries without being arrested. This hindered the ability of the ICC to try him for the war crimes he had been accused of committing. The practice of trying citizens locally has also been a hindrance to the application of International Criminal Law. When a country opts to try a high-profile individual locally, it is often a sham as the trials get dragged out over lengthy durations or dismissed over ‘lack of evidence’. Coming up with solutions to these limitations would be very monumental in ensuring the justice is dispensed, even at the international scene.

The mandate of International Criminal Law seeks to remedy the actions committed in violation of an international treaty or convention, which are often concerned with human rights. The question of which individuals and states are liable for the downing of the Malaysian aircraft, resulting in the deaths of around 300 people requires the collection of evidence and investigation by the different bodies mandated with that role. Therefore, all the different bodies should make haste to conclude their investigations, whenever cases of International stature come up so as to ensure that the perpetrators are punished.