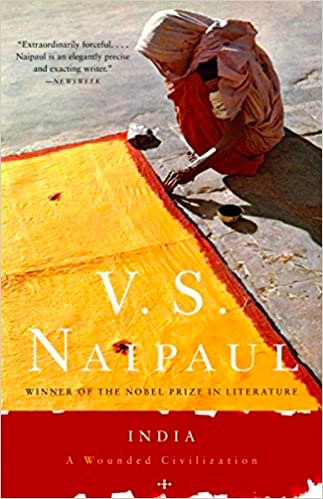 As many travellers, invaders and rulers passed by its lands, India washed down into many claims of its status as a wounded civilization. In this article, I wish to delve deeper into this “wound” that comes across as a scar even today in modern India.

With one ruler gone and the other on his way, India has found its history in frequent breaks, renewing its foundations with every phase of its subjugation to another. Naipaul builds his arguments on this very fact that with every civilization entering its lands, India only borrowed her disciplines and institutions, which later rendered her incapable of sustaining them when the time came for independence. India focusing too much on Hindu beliefs has no creativity of her own; that its art, painting, architecture, etc. only show the barbarism its continuity has turned into. He comments on the misinterpreted meanings of Gandhi’s nonviolence prevalent in the beliefs of the Indian people; that of nondoing and social indifference, which are mainly born out of the belief system instituted by “karma” and “dharma”, the “Hindu calm”, as he calls them.

What presents itself challenging about the question of India’s continuity is the absence of a common ideology agreed upon by many of its diverse people that runs dominant throughout the several foreign civilizations that claimed to make India theirs. Indians are mostly associated with Hinduism and it is true that we enjoy it, as a common belief system that is present nowhere else in the world. However, Buddhism was the oldest religion in the Indus valley civilization and “Hindu” was a term coined by the British because of the close association of the civilization to river Saraswati. Jainism was also quite abundant in those times. Coming back to contemporary times, even after the birth of Pakistan, many of our fellow Muslims chose to stay back in India, making her a home to the second largest Muslim population in the world. Therefore, if India tries to establish its sense of continuity along the lines of religion, there are bound to be “breaks” and discontinuity. Continuity then becomes a fragility of identity that is supposed to reflect India as anything but a wounded civilization.

The Indian identity strongly influenced by Hindu beliefs comes across as religious narcissism wherein a “mere abandoning of a ritual” threatens the Hindu continuity.  Western intolerance has made the world for Indians complete and pure, an idea that Mahatma Gandhi instilled a strong support for during the independence struggle. India could, thus, detach itself from the rest of the world in support of religious “truth” and fulfillment could be attained as easily as it was destroyed by invasions. Amartya Sen also points out this commendable Indian tolerance towards foreign interference. Gandhianism, an ideology that reigned abundant during the freedom struggle turned into “self-cherishing faddism” and quietism which rendered most Indians content with their Hindu fate. “Holy poverty” as Naipaul calls it, ran prevalent as a moral obligation to this fate that was known to have been popularized by Gandhi’s simplicity.

Gandhi’s self-absorption was part of his strength. Naipaul remarks how Gandhi never mentioned anything about his travels abroad, which comes as a surprise since Gandhi, belonging to rural India, should have had something to say about merely the change of air in a foreign country. In conversation with Dr. Sudhir Kakar, a psychotherapist, Naipaul lays down the concepts of the “underdeveloped ego” amongst Indians that binds them tightly to societal norms and practices. This ego begs the need for a sharper perception when societies change. The individual must then accept his individuality rather than let his perception succumb to being a function of the old social organization. Thus, with numerous foreign invasions, the key thing to be held onto, for Indians, was  their individuality, a western notion, that calls for rejection by their Hindu continuity. The outer world only matters insofar as it affects the inner. It is the Indian way of experiencing things. In this way, we use the outer reality to preserve the inner continuity of the self. Gandhi, redefined continuously by the newness of England, racial discrimination of South Africa and British authoritarianism in India only let these pressures onto a path of self-realization, sinking into his narcissism further. He was a wounded man and his Gandhian simplicity had become indistinguishable from a primitivist rage.

India saw Gandhianism as a lifestyle. Perhaps, Gandhi’s policies were required only for Indians to rise out of their tolerance, and hence, suited for Non-cooperation and Swadeshi movements only. Self-absorption had, thus, to become a part of their strength. However, Independent India carried forth  its self-absorption that clearly played out as its  religious narcissism when Nathuram Godse assassinated Gandhi, for betraying Hindu interests. “Irony upon irony”, is what Naipaul calls this as India takes pride in the very religion that has plunged them into riots and a threatened communal harmony.

Hinduism has called for the spiritualization of politics and, therefore, given birth to Hindutva. Lifestyle and the art of living are no longer self-absorbed but often inflicted onto a state where diversity demands not only recognition but also respect. In lieu of this respect, India struggles to establish communal harmony especially after the partition of 1947. However, politics has entered India in the form of “secularism” and “Hindutva”, existing side by side. Political organizations like the RSS, Bajrang Dal and Shiv Sena and not to forget the ruling party, BJP, continue to represent Hindu nationalism in an attempt to establish a common ideology out of its failure in doing so before. If Indian political thought arose along Hindutva and its Muslim equivalent, then the partition politics of ‘47 would occur all over again. India would, thus, retreat to archaism, responding in her old way, meeting its inadequacies without any intellectual capacity, rendering her more wounded than ever.

Snehal Sreedhar is an undergraduate student of Ashoka University, pursuing her major degree in Economics.