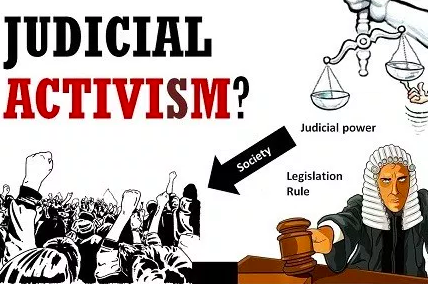 Justice Krishna once said, “every judge is an activist either on the forward gear or reverse.” However, the question of judicial activism has been a bone of contention for decades. Naysayers argue that the judiciary oversteps its powers and encroaches upon the power of the legislature and the executive. On the other hand, some argue that this is done within the power given to the judiciary.  Through the years, there have been many prominent examples of the judiciary reading into the Constitution and these instances have been thoroughly criticised.

Since the Constitution was penned over half a century ago, it is only natural that certain aspects of it must be looked into again with a fresh perspective, without hampering the basic elements of the Constitution itself. The words in a certain article should be open to interpretation by judges, as there is a very limited scope if we are to remain confined to strict meanings of the same. Judicial activism advocates the use of interpretation of judges as opposed to strictly sticking to words of the law. Often, this is seen as judges using their personal policy preferences as a means to reach decisions that are meant to be unbiased. However, the political circumstance within the country has a big part to play while deciding how the power should truly be divided.

The Need for ‘Judicial Activism’

It is an accepted notion that separation of power between the three organs (Legislature, Executive & Judiciary) must be upheld at all costs. However, the nature and structure of current society relies on judiciary to ensure justice. In a utopian world, the power of lawmaking would lie solely in the hands of the legislature, and such a process would be fair and reasonable. But unfortunately, the reality of today’s government is closer to being dystopian than utopian. The idealistic circumstances under which such a division of power was envisaged hold no ground in today’s world as corruption runs rampant, vested interests are given priority, and deprivation of masses is ignored. Further, the legislative process is more a rule of majority than reason, and fails to satisfy the ends of justice. In such a circumstance, the proactive role of the judiciary is only natural and must be so accepted.

The criticism of judicial activism has to be looked into taking into account the political climate of India. The faith of the Indian public in the political class is at an all time low. In a situation such as the current one, the courts need to step in and preserve the sanctity of law, in order to maintain ‘justice’ to have the same meaning. It could even be said that the activism of the court is caused by the lack of activism of other branches of the government. If we look at it this way, the acts of the judiciary in this case are merely compensatory in nature. Perhaps in a situation where the political climate is more stable and more trust can be put in the hands of the executive and legislature, judicial activism would not be required in the same way.

It has been pointed out that judges should not create a law and seek to enforce it. However, there are scenarios wherein such an act is carried out due to judicial compulsion. An example of this is the Vishakha case, where it could be said that the apex court created a law and sought to enforce it, but they clarified that those guidelines would only be treated as a law until the legislature would enact suitable legislation on sexual harassment.

In the landmark judgment of Maneka Gandhi vs Union of India, the court read the “due process” doctrine into Article 21 of the Indian Constitution. This was done despite the fact that the legislature had decided on the words “procedure established by law”. The Supreme Court, thus, changed the entire meaning of the article and limited the scope of what kind of law would be permissible under Article 21, which is a ‘just, fair and reasonable’ one. On the face of it, this can be considered an example of the judiciary reading into something that does not exist in the Constitution. However, this was a necessary action carried out by the judiciary for the protection of the rights of the citizens of India. By limiting the scope of what a law would mean under Article 21, they have provided for a further system of checking whether such a law should have standing in the first place. This action, thus, cannot be seen as incorrect.

Further, the judiciary has an additional responsibility besides application of law – they are also the guardians of justice. Article 38 directs the state to strive to promote the welfare of the people by securing as well as promoting a social order that upholds the mandate of justice in all spheres, be it social, political or economic. Indeed, some articles point towards justice being the ultimate goal within our judicial set-up. For instance, Article 142 provides the Supreme Court with the power to pass any decree or order necessary for doing complete ‘justice’. Further, the article even empowers the court to ignore existing legal provisions for this purpose. This is a clear indication of the fact that the Constitution framers intended for a certain amount of power to be given to the judiciary, and saw them to be the true flag bearers of justice within the three organs.

Kesavnanda Bharti, which led to the birth of the concept of Basic Structure, was also criticised as being an example of judicial overreach.

During the Constituent Assembly debates, Dr. Ambedkar emphasised on the necessity of amendments. He believed that future generations should have the power to make amendments to the Constitution as and when required. Similarly, Jawaharlal Nehru called for a certain flexibility to ensure that the constitution would be able to stand the test of time. Dr. P.S. Deshmukh felt the amendment of the Constitution should be made easier as further reading of certain provisions would bring out inherent contradictions within the Constitution. H.V. Kamath, however, was of the opinion that procedural safeguards should be observed in order to avoid hasty amendments. The reason behind the aforementioned leaders’ apprehensions is blatant – they feared the Constitution would not be able to stand the test of time and would be opposed by future generations. However, the Constitution is still applicable in most ways, and in places where it is supposed to be tweaked, such changes are accepted. The judiciary upholding the basic structure doctrine does not in any way go against the wishes of the framers, as the amending clause still exists without any fetters.

Separation of power has been mandated under the Indian constitution. However, the basic need for economic, social and political justice, as stated in the preamble overrides this strict separation. Often, the judiciary has to take matters into its own hands in order to ensure that justice is achieved. In a case where the judiciary had not done the same, rights such as right to privacy would not exist today. Further, a bold and active judiciary is the sign of a healthy democracy. The Indian judiciary has delivered some visionary judgments, such as the 377 judgment, which would have been completely unimaginable merely a few years ago. It has proved time and again that it deserves the recognition it achieves, and continues to work towards the collective goal of justice for all Indian citizens.

However, this is not to say that the judiciary is perfect – like every other institution, it comes with its own set of flaws. Judicial accountability still remains debatable; nevertheless, the question of judicial overreach unarguably stands redundant.