Book Review Series: #3 Talking to My Daughter About the Economy: A Brief History of Capitalism 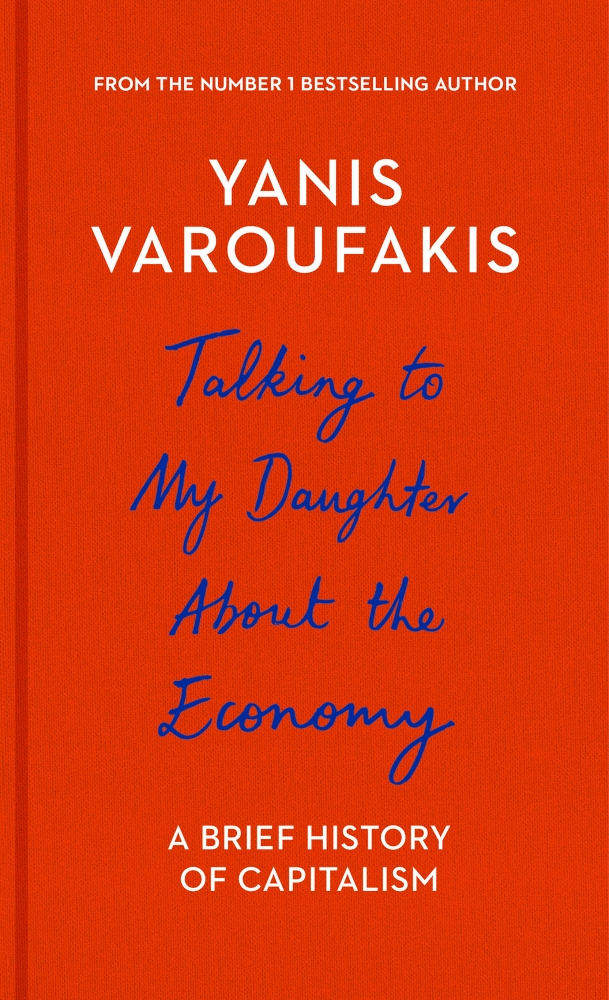 Listed with Adam Smith, George Akerloff, and Robert Shiller, Yanis Varoufakis’s Talking to My Daughter About the Economy; A Brief History of Capitalism seemed least intimidating. The author, a Greek economist, academic and politician, who served as the Greek Minister of Finance, clarifies, by dismissing the need for scientific and mathematical jargon common to most conversations with economists, the nature and intent of the book to his prospective readers. Through personalised images for his daughter, the book thrillingly offers new perspectives to otherwise familiar narratives.

Do you believe political voice is empowered by economic intellect? So does the author. Find yourself out of depth about market economies? You’ll love his work because of the accessible arguments and narratives. The heterodox run on human history in the book makes it an interesting read.

Varoufakis plots through human history from the time of hunter gatherers, leading to a situation of over-hunting of animals. Driven by need, we invented farming, in time, developing methods to produce more than we could consume. The surplus was kept in shared granaries. Writing came about to account the share of each individual farmer for their share of the surplus. Thus, came around currency, in other words, debt.

The innate human greed led to people in charge of the grain, hogging it. To continue in this position power was a necessity. So they created bureaucracy, army, and religion. Legitimacy was established through brute power and belief among the masses of their supremacy. Centuries went by amassing wealth and power, condensed among a few of the aristocracy in feudal systems.

When the Europeans invented ships, discovered sea routes, marketed produce from one region to another for an appreciated value, merchants hoarded their wooden vessels with wool in England, exchanged it for silk from China and metal in Japan, and on their way back bought spices from India, to return with more wool than what they started out with. Merchants got rich. Varoufakis recognises this as a turning point in economic history. Now the feudal lords saw the merchants as competition. So they ended the age old system of slave farming of goods, in return for producing value enhanced trade commodities to maximise the profits. Renting out their estates to former serfs, coming back to squeeze as much value as possible through the debt. Like never before, everybody from lords to the lowly “had dollar signs in his eyes”. As societies with markets evolved into market societies, money transformed from being a means to an end.

Comes industrial revolution, banks established and loans got institutionalised. Everybody is in debt. Illustrating bankers as time travellers, who conjure money “From nowhere – out of thin air!”, they move across time to bring money from the future to be lent and profit to be earned in the form of interest on these loans. ‘The Great  Reversal’ occurred, distribution started before production, and debt came before surplus and production. As the industrial era progressed, the economy of market societies grew enormously resulting in the massive rise of debt needed to fuel them. Bankers continued to create money.

When times get troubling and banks fail, the state invariably has to intervene in the banking system itself. The only way to halt this destructive vortex is by lending money to the banks resulting in more debt! This is because the ‘bankers and the state’ share a toxic relationship, “… Entrepreneurs need bankers to lend them, who need entrepreneurs to pay interest, and bankers need governments to protect them, who need bankers to fuel the economy…” (Chapter 4 – The Black Magic of Banking). Where does the state find their money? The central reserve creates money “From nowhere – from thin air!”.

Varoufakis tells with great vigour, using simple (too simple(?)) stories. For instance, the story of Faustus and Mephistopheles is used to elucidate the partnership of profit and debt. Giving into the tempting proposal of absolute power and limitless pleasure in return of his soul after, Faustus enters a contract. This explains the indispensability of debt in a market society which is profit-oriented. There is no profit without debt.

Money supply and the market is explained through cigarettes in a German prison camp. The camp prisoners received packages from the Red Cross including food, cigarettes, tea, and coffee. Slowly due to their imperishable nature cigarettes become the currency of exchange. Each time the Red Cross supplied more cigarettes their value reduced thereby creating inflation. During times of scarcity, the prices would likely go down due to the shortage of cigarettes; this explains deflation. Soon ‘bankers’ emerged, who would loan cigarettes with interest. Here the Red Cross takes the role of an independent central bank.

Progressing through the book written for a young audience, aimed to help make sense of a troubling world, I find it to be extremely cynical about the economy. While the author’s recommendation to democratise means of production is appealing to the leftist in me, I am skeptical of its effectiveness. The author also omits the role of political institutions and political decisions influencing the economic relations which are almost always the cause of the economic difference that brings in the first question of the book “Why so much inequality?”

The book concludes by patronising consumeristic preferences, revealing the unjust world created by market society. The ‘wholesale unhappiness’. Calling it an economy that is not only terrible at achieving the goal for itself but one whose goals should never be met. He ends admiring the end noting the endless iteration of society thrown into debt, inequality, and greed. Clearly, there is a need for change. Somebody needs to do something. Varoufakis has initiated a conversation to ‘Inspire a better world’ where experiential value precedes exchange value.

If Mr. Nabuk, a farmer from Mesopotamia using public granary to store his produce, hoped to understand the market economy, money and not rely on ‘experts’ who fail to explain to masses and are ‘quite simply clueless’, I would recommend this book as a starting point. If you are anything like him, you too must read this rewarding book, with reservations of course. Trusting it’ll deepen the thirst for more.