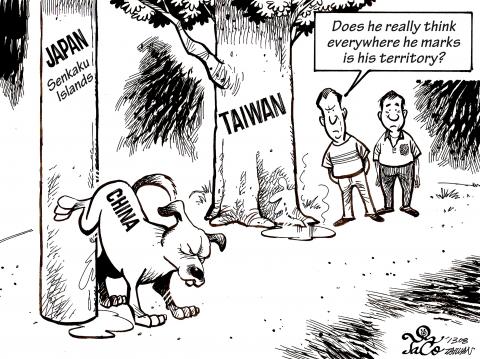 With the diplomatic talks having effectuated zilch, are we looking at another Sino-Japanese conflict? Why would the international tribunal not be the effective way to deal with the dispute, which is potentially getting worse? Amrita Jash contemplates a military crack-up between the two nations unless joint initiatives are taken to mitigate the growing tension from both sides.

Following a temporary thaw in China-Japan relations after the 2015 Security Talks, maritime territorial tensions have ramped up again in the East China Sea. In the recent talks between Premier Li Keqiang and Prime Minister Shinzo Abe on the sidelines of the Asia-Europe summit meeting (ASEM) in Mongolia, Abe raised concerns over China’s expanding military activity in the East China Sea.

With China’s growing naval activism through increased incursions by coast guard vessels and jet fighters in surrounding waters and airspace, Japan too has upped its defensive posture. In 2015 Chinese incursions into Japan’s airspace prompted a record-high 571 fighter scrambles, elevating Japanese concerns. Since December 2015, China has stepped up its militarization of the area by deploying Chinese navy vessels at various instances in the contiguous zone around the disputed Diaoyu/Senkaku islands. In response, Japan has switched on a radar station in the East China Sea, giving it a permanent intelligence gathering post close to Taiwan and the disputed islands. Japan has furthermore deployed 12 coastguard vessels – successively increasing its fleet presence against China’s upped ante. Even the recent diplomatic talks between China and Japan have failed to de-escalate the tensions. China has stepped up the pressure by dispatching a Jiangkai-1 class frigate to patrol for the first time, followed by another episode of intrusion by a Dongdiao-class reconnaissance ship that entered the contiguous zone of the Diaoyu/Senkaku islands.

This string of events has increased the potential volatility of the East China Sea dispute. The accidental risk of a military confrontation between China and Japan in the tensed waters has heightened. The diplomatic failure on either side to adopt a maritime crisis management mechanism further increases the risk. This makes the East China Sea dispute only more complicated and therefore, achieving a resolution seems evermore unlikely.

The dispute’s status? It is complicated between China and Japan with two major elements in dispute. First, the competing sovereignty claims over the Diaoyu/Senkaku islands remain fractious. Second, this dispute also entails a maritime border claim over where China and Japan’s Exclusive Economic Zones (EEZs) — based off the opposing coasts and mainly to the north — extend to in the East China Sea, causing an overlap of the EEZs. The logical way to settle the dispute is by judicial arbitration, but for China and Japan, there exists little chance that an international tribunal will be able to examine the dispute. Beijing wants to establish its own jurisdiction in the East China Sea by challenging Japan’s administrative control over the islands. In contrary, Japan sees no dispute in its administrative control of the islands as part of the 1972 Okinawa revision agreement. Therefore, in this case, a judicial settlement of the East China Sea dispute is likely out of the question.

What makes matters worse in the East China Sea are the actors involved. As both China and Japan are strong powers with roughly equal military capacities — two tigers sitting on the same mountain. In such a situation, the prospect of a Sino-Japanese conflict in the East China Sea is more likely to occur. There is a clash of interests that is both material as well as ideational in nature. Material interests are based on who takes control of what – fisheries, hydrocarbons, oil and natural gas; while ideational interests lie in the pride of gaining control over territory which is interlinked to the identity. Most importantly, for China, loss of territory to Japan compels its erstwhile victimhood in the hands of Japanese imperialist aggression to resurface. In addition, domestic politics and nationalist spirit in both China and Japan leaves less room for any diplomatic compromise.

With the long dead 2008 Consensus on the East China Sea, there remains no active binding mechanism to defuse the escalating tensions. The real risk of escalation remains any form of accidents at sea given the Chinese navy’s increased military activities compounded by Japan’s militarization through intelligence and surveillance tactics as well as increasing fleet presence and antimissile facilities. All this contributes to the heightened prospect of a military calamity.

To avoid a tragedy, China and Japan need to tone down their military activities and adopt proactive confidence building measures. An unintended confrontation could impose heavy economic, military, and reputational costs on both countries. A prompt de-escalation is needed for restoring stability in the East China Sea.  Since there is no quick fix to the broader problem a crisis mechanism needs to be reached to quell the dangers. This can be done by implementing tacit agreements, making the security talks a regular practice, facilitating track-two dialogues and joint-military exercises, and formulating a maritime code of conduct. But such measures can only be reached through building of trust — which remains the biggest fault line in the China-Japan relations.

Therefore, with the pressure building in the East China Sea, if anything, the dispute between China and Japan only seems likely to get worse without a channel to reduce tension.