In the ‘Ease of Doing Business’ ranking of 189 countries, India has dropped from the 131st rank last year to 134thin 2014.The very fact that it is easier to do business in Nepal (105), Bangladesh (130),Pakistan (110)[1] than in India, and that India is getting to be a tougher place to do business, is alarming. For a country that claims to be a superpower by 2030, India performs abysmally low on various ‘Ease of Doing Business’ parameters such as starting a business, dealing with construction permits, getting electricity, registering property, paying taxes, trading across border, enforcing contracts or resolving insolvency. However, in this paper, I have analyzed the following four sectors: 1.Starting of business, 2. Enforcement of contracts, 3.Infrastructure (concentrating on roads and highways sector) 4.Tax structure. In each sector certain policy measures have been suggested to improve the process of starting up and doing business across the country.
1. STARTING A BUSINESS
Innumerous entry level barriers act as major impediment in starting a business in India. There are 12 procedures involved in starting a business in India, beginning from obtaining Director Identification Number (DIN)[2]to registering for employee’s provident fund and medical insurance. The procedure for registering a company in India takes 27 days, costing 47.3% of per capita income. The minimum paid up capital for Private and Public Limited Company in India is Rs.1, 00,000/ Rs.5, 00,000 respectively which is the highest in the South Asian Region. When compared with other South Asian countries, India lags well behind in terms of starting a business. Even though China has more procedures (13) than India (12), it must be noted that the cost of these procedures is just 2% of per capita income. On the other hand, start ups in Australia require 3 procedures and take 2.5 days, costing just 0.7% of the per capita income. Even a country like Indonesia does better than India in terms of number of procedures (10), per capita cost (20.5) and minimum paid in capital (38.5). According to World Bank report on “Doing Business 2014: India”, the government of India since 2009 has failed to introduce any significant regulatory reforms in the sector apart from establishing an online VAT registration system in 2011 and replacing the physical stamp previously required with an online version. India has only partially succeeded in reducing the administrative burden of paying taxes by abolishing the fringe benefit tax. 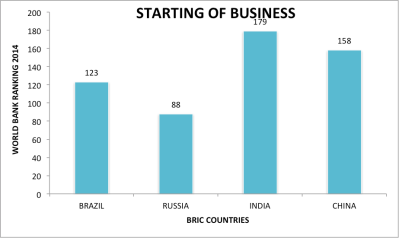 India’s poor ranking in this parameter can be attributed to failure of Indian States to establish a one stop shop for application, procurement and clearance of various licenses. For e.g. in order to start a business one must procure multitude of clearances and licenses such as industrial license, compulsory license, environmental clearance license, factory license , shops and establishment license, import license, export license and central exercise license, trade license and various other types of licenses depending upon the nature of business etc. Thus, absence of one time shop has exacerbated the problems of entrepreneurs who often get caught up in red tape, lengthy investment and business approval processes.

However, in 2013, Department of Industrial Policy and Promotion (DIPP) in collaboration with Infosys launched eBiz project. The project intends to provide online single stop shop for all business licenses, clearances, approvals, no objection certificates, permits and even filing of returns so as to prevent the entrepreneurs running from department to department filing forms and procuring clearances. The first phase of the project was piloted in Andhra Pradesh, Delhi, Haryana, Maharashtra and Tamil Nadu. While the portal in its first phase only provided information on forms and procedure, the second phase of the project launched in 2014 has added two more services such as industrial licenses and industrial entrepreneur’s memorandum along with setting up of payment gateway by the Central Bank of India. [3]
This ambitious project, if implemented successfully, can go a long way in easing the process of starting business in India. It must be noted that online approval and issuance of both Central and State level clearances in a time bound manner would be necessary for successful implementation of this project. Another impediment to the implementation of this project is the likely resistance of those departments that are used to running their services manually or in the offline. Under the UPA government, the project faced a stiff opposition from Ministry of Environment and forests, the Central Board of Excise and Customs and the Central Board of Direct Taxes.[4] The reluctance of various departments to change their modus operandi via digitization of their services has started to cast a cloud over the success of this project. It has now become essential for the Ministry of Commerce and Industry to actively promote the project at all State and local levels so as to help India gain a competitive edge in the commercial and industrial market. In addition to this, India’s federal structure characterized by power sharing between States and the Center and decentralized decision making process has attributed to the problem of varying business and economic conditions across India’s 29 States and 7 Union territories. Thus, the Central government must undertake consensus building measures to ensure that major policies formulated at the Center gets implemented in pith and substance across various States.
2.ENFORCEMENT OF CONTRACTS 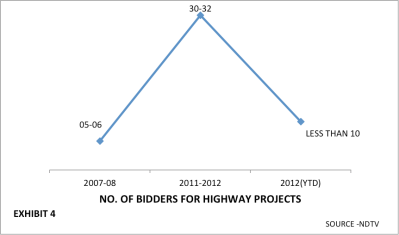 Exhibit 4 suggests that number of bidders for projects was highest in 2011-12 and lowest in 2012. 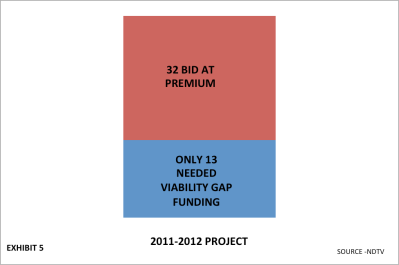 Exhibit 5: Nearly 32 Bidders bid at premium and only 13 of them opted for viability Gap funding.