‘Unsettling’ is perhaps the best word that encapsulates the stream of emotions and thoughts which surfaced in my imagination after reading Marjane Satrapi’s Embroideries. Set in the backdrop of post-revolution Iran, Embroideries is a tale of a bunch of masochistic women who have internalized the oppressive societal norms in which they live and at the same time are conscious about its biased nature as well. Embroideries don’t refer to the beautiful piece of artwork which clothes exhibit; in the context of this graphic novel it refers to the sewing up of a woman’s vagina so that she bleeds on her wedding night which is unsettling.

This is a tale of women whose stories sound so familiar and yet profoundly different from one’s own, the use of humor in Satrapi’s writing succeeds in making the reader laugh throughout the length of the book but at the same time doesn’t fail to touch upon the hard-hitting realities of life witnessed by only one particular gender.

The novel is unique and groundbreaking in multiple ways considering the themes it touches upon and the location of women, which is in stark contrast to the usual narrative of western women and the oppression faced by them. But it is also unique in the way that it doesn’t fall in any particular structural form. It is a graphic novel but it deviates from the usual normative features of a graphic novel; it doesn’t have a singular protagonist. It is a book without boundaries, a piece of art that doesn’t shy away from breaking the conventional norms which are quite apparent from the style it follows.

Satrapi’s work is hard to digest and especially for someone who doesn’t go through all this societal oppression but that doesn’t negate its existence. She uses the simplicity of everyday tales of women to convey the grief of women to which they themselves do not relate and even if they do, have indeed made their peace with it.

This essay touches upon two ideologies that are prevalent throughout the length of the book namely sexuality and internalized sexism (in various forms like patriarchy and gender roles). These two are in no way representative of the entire novel as the novel also depicts how women are also well aware of their situation and lament about it by comparing themselves with western liberated women.

The first and foremost point which I would like to discuss is the question of internalized sexism. Interestingly the whole novel of Satrapi doesn’t even have a single male character to dictate women. There are appearances of male characters throughout the story but they are in the story only from females’ point of view. Males in the entire story are shown as part of females’ stories except towards the end. But still, the prevalence of sexism throughout the novel is amusing and perplexing and signals towards nothing but internalized sexism of women in their own minds. For example, in the very beginning, when the women of the house are sitting in with the men of the family the granddaughter explains how her grandmother advocates that “one must respect one’s husband” this unearned respect which a woman is required and feels obliged to offer is something which both the society and the women expect out of them and 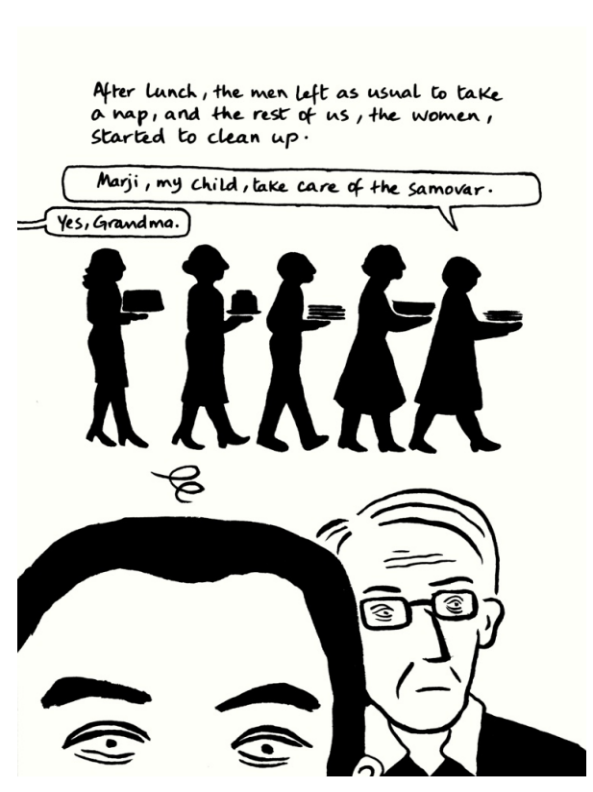 any defiance from it is seen as morally wrong.

The magic of Satrapi’s work is not only witnessed through the words; one has to decipher the graphics carefully as well to understand it better. Take for instance this graphic from the book: the graphic beautifully shows how from grandmother to granddaughter all of them are busy taking care of the cleaning chores while the men have abandoned the scene after eating and interestingly no one questions that. Again, internalized sexism.

The other incident which I am quoting from the book hits the nail on the head of the argument of internalized sexism. A 13-year-old as shown in the graphic from the novel is approached by her mother about her marriage to a 69-year-old to which she opposes but is mummed by her mother by saying that “I didn’t ask for your opinion”. This could be seen as an intersection of various problems as well, to begin, the null agency of women, and the neglect of the suppression of women’s agency by another woman, symbolic of a much larger problem of internalized sexism which appears unproblematic to even a woman, and is hence continued perpetually. 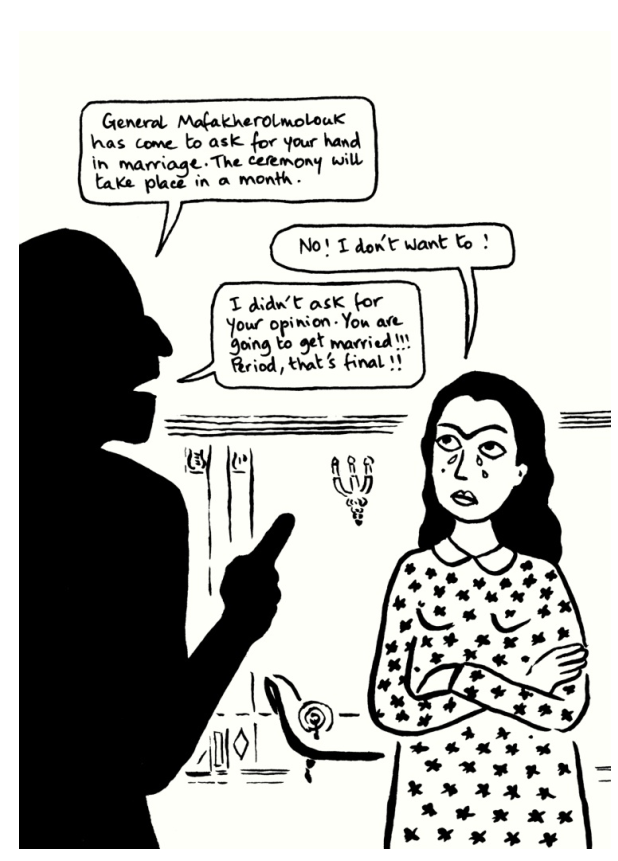 In the middle of the novel one woman says that “we good wives we pay for our own foolishness” and in a very classical societal manner of blaming women for everything blames her own self. Similarly, take this graphic, for instance, the woman in this graphic was troubled by her own body as her earlier body no longer “amuse” her husband and t how she needed an alteration to please him, which is symbolic of how women are limited to their body and how she herself feels the same. 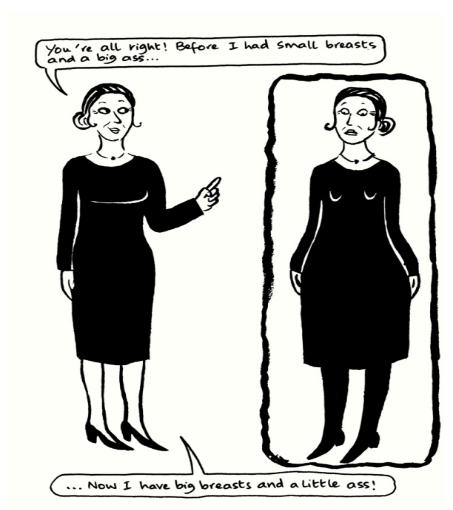 The next point which I would like to touch upon is the question of sexuality and how it becomes oppressive and a moral burden for women. Sexuality in this particular novel is multidimensional and multifaceted one can witness instances throughout the novel where the women are well aware of their oppression and even try to evade it but fail to do so. Sexuality is used as a tool to oppress them, judge them and reject them. 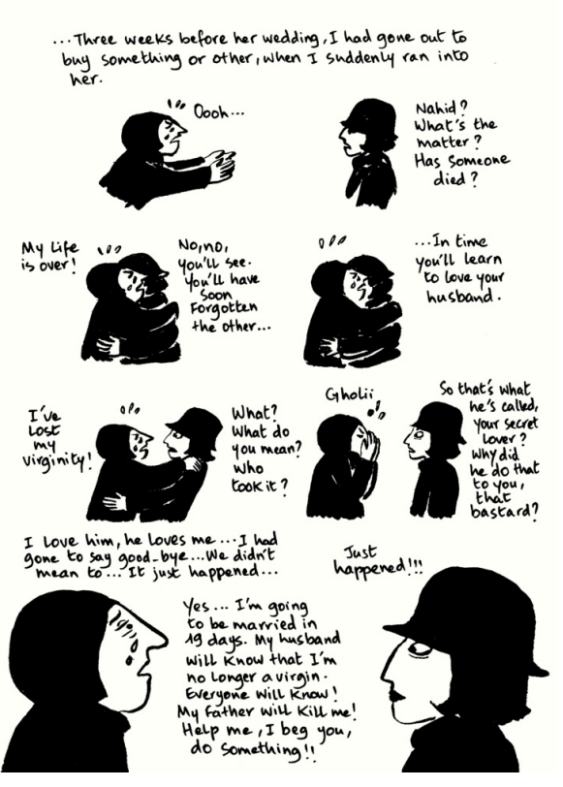 As mentioned at the very beginning of this essay, the name of the book itself derives from the sewing up of a woman’s vagina so that she bleeds on her wedding night, which is symbolic of a much larger societal problem of judging the woman and her character based upon her virginity. We find instances throughout the book where this is mentioned; take for instance this graphic from the story where a woman is lamenting her lost virginity with another man before her marriage and considers it a sin and is therefore scared of her life. 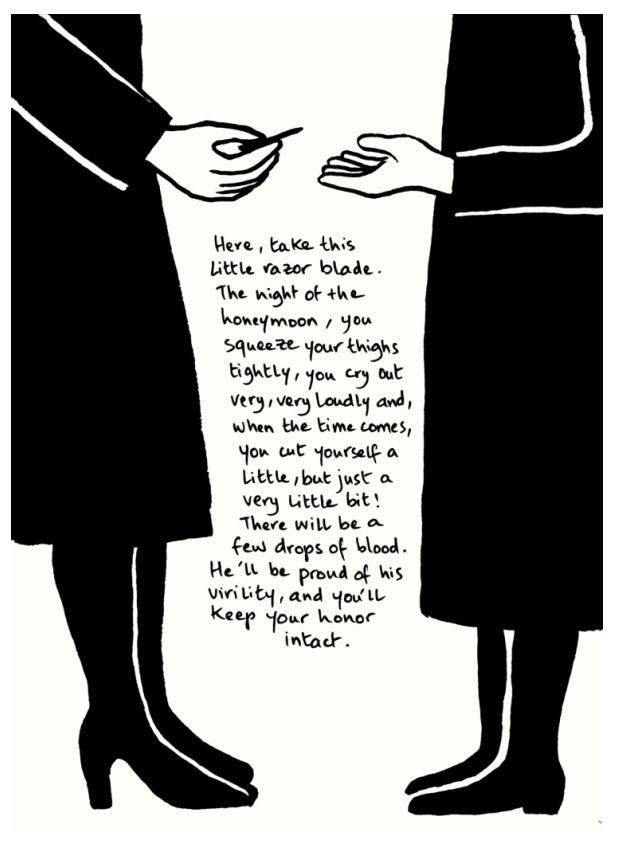 The story is full of incidents like these. The story reaches a point where one woman is being cheated on by her husband while she is well aware of that. But when she herself sails in the same boat, she finds it morally wrong to engage with the other man which shows how moral standards for a woman are tied with her sexuality. But the most disturbing remains the embroidery incident on which the novel is actually named. Take a look at the graphic, a woman is shown giving another woman a blade to fake her virginity on the wedding night so that it doesn’t disappoint her husband to know that she is not a virgin.

To conclude I would reiterate the fact that Satrapi’s work is in no way an attempt to reinforce the societal stereotypes and oppressive notions but it is a profound reflection on the existence of such oppressive and heinous societal conditions.