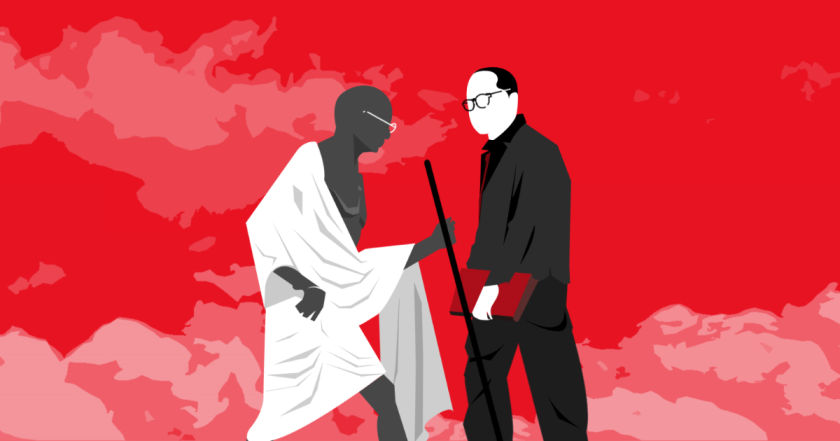 India’s success in maintaining its status as a sovereign state may be credited with the parliamentary democracy it follows and the clarity in the separation of powers. However, the two most important figures in Indian history, Gandhi and Ambedkar, had distinct views on adopting a parliamentary form of government. Gandhi’s perspective could be defined as a moral argument, whereas Ambedkar’s stance was practical and created a framework for inclusivity within the constitution. The legal and moral arguments raised in this particular discourse highlights the greater ideologies espoused by the two stalwarts of the Indian independence movement.

A colonial legacy exists in the fundamental functioning of the multiple branches of the government whose foundations could be traced back to the Raj. Indians gained independence from the British in 1947, but was “India” still detached from its colonial hangover? Most of the political infrastructure of sovereign India was inherited from the British, one of which was the parliamentary government system. Many, including Gandhi, objected to the decision to adopt a parliamentary system. It was Dr B.R. Ambedkar who initially pushed for a parliamentary democracy for an Independent India. Dr B.R. Ambedkar successfully engineered multiple concepts and drew inspirations for the constitution derived from the political systems of other countries. Later, however, on multiple platforms, Dr Ambedkar was vocal about his objections against the parliamentary system. This article focuses on detailing the objections of Gandhi and the contradictions posed by Dr B.R Ambedkar about India’s adoption of parliamentary democracy.

Gandhi’s views on the parliamentary form of government

Hind Swaraj, a seminal work of Gandhi’s views on the contemporary pre independent and his hopes for an independent India. Gandhi’s observations of the English society and their politics is clearly recorded in the chapter “ The condition of England.” Gandhi describes Britain’s situation as “pitiable” due to the parliamentary system it follows and compares it to a “sterile woman” and a “prostitute”. His criticisms of the parliamentary system were solely based on his observations on the proceedings of the British parliament. Gandhi’s criticisms against the House of Commons caused him to have no confidence in the parliamentarians, as, according to him, they were “hypocritical and selfish.” His fear that he mentions in Hind Swaraj was that “I pray to God that India may never be in that plight.” The parliament, according to him, would serve the party and, therefore, whatever the stance taken by the party. The struggle will not be to provide people the best service but to take the majority and be in power.

It was evident that Gandhi viewed the future of India not as a mere political state but an ideal state. The parliamentary form of government would create a representative democracy which was different from the vision of “Swaraj” he had in his mind. Gandhi believed that the government’s actions must be “so smooth (such) that its effects would be more apparent day by day.” Gandhi would rather have a few men entrusted with fundamental duties to maintain the state. Gandhi wished for a “Ram Rajya,” which does not mean a “Hindu Rajya,” but an ideal state of his imaginations which is inspired from the Kingdom of Lord Ram in which, according to him, “ensures equal rights alike of prince and pauper.” The Ram Rajya would be focused on delivering “direct democracy” that will be a self-sufficient socialist economy without having a hierarchical system within the society. Gandhi’s views on the ideal Indian state  was justified as he wanted a state that was above utopia and below heaven. The reason why India still opted for a parliamentary system, despite Gandhi’s objections, lies in the justifications by Ambedkar in the constituent assembly.

The Parliamentary form of government ensured the princely states and provinces that the Union of India would completely enforce the principles of liberty, equality and fraternity stated in the Preamble of the Constitution inspired from the French Revolution. These could be the guiding principles for the representative democratic system that India has maintained. The idea of applying representative democracy is also to enforce the fact that India to be a socialist state even though the term “socialist” was not added while drafting the constitution as Dr Ambedkar believed that the constitution in its entirety is socialist in nature and adding the term into the preamble would be redundant. To further build and maintain representative democracy in the country it was necessary to have a parliamentary system.

Dr Ambedkar specified the glaring fact about the American- Swiss system (Presidential System) and the British system (Parliamentary System), in his words, “The American and the Swiss systems give more stability but less responsibility. The British system, on the other hand, gives you more responsibility but less stability”. Opting for a parliamentary system for the legislature rested upon the factor of responsibility and stability.  As Dr B.R Ambedkar put it during the constituent assembly discussions, “A non-parliamentary Executive being independent of Parliament tends to be less responsible to the Legislature, while a Parliamentary Executive being more dependent upon a majority in Parliament becomes more responsible”.

The parliamentary society meant that people of minority communities could be elected to the parliament (either of the houses; Lok Sabha or Rajya Sabha) so that they would not be suppressed by any other majority communities. A presidential system in India would have resulted in a majoritarian state and the founding fathers wanted to prevent such a scenario. However, Dr Ambedkar made the infamous statement “Sir, my friends tell me that I have made the Constitution. But I am quite prepared to say that I shall be the first person to burn it out. I do not want it. It does not suit anybody.” This statement created confusion and contradiction in the stances that Ambedkar had previously taken. The same Ambedkar who had justified the adoption of a parliamentary democracy, commented in an interview with BBC in 1953 “Democracy will not work (in India), for the simple reason we have got a social structure which is totally incompatible with parliamentary democracy.”

There were disagreements between Gandhi and Ambedkar on multiple issues relating to the formation of the Indian State. Gandhi’s firm belief in creating a Ram Rajya and the efforts of Ambedkar to fine-tune a constitution that can be the foundation of a sovereign welfare state did not reach a common ground.

Adoption of a parliamentary system and how appropriate it would be ended in an unsettled debate. In Gandhi’s perspective, adopting a system followed by our colonizers would create the same “pitiable” situation as theirs. The lack of a structure or administrative framework in the kind of state that Gandhi proposed. On the other hand, Ambedkar aimed to model a representative democracy where the parliament would also consist of people from underrepresented or depressed classes. The common thread between the arguments of these two men was that they hoped and strived for India to be an egalitarian society.

The constitution of India guided the state’s role, where it distinguished the separation of powers, which contributes to the nation’s success not being subject to drastic change or shift in power. Success here is solely based on the fact that the status of the Union of India as a sovereign state has not been harmed. The aid to this success has been well laid out in the constitution, which appeals to maintain the same sovereignty and enforce the principles of Equality, Liberty, and Fraternity. In upholding the objective of representative democracy, parliamentary democracy has had success in its regard.  It does create an open and legal framework for the inclusivity of diverse and underrepresented communities in the mainstream discourse.

Arjun Sujit Varma is an undergraduate student at the Jindal School of Government and Public Policy with a keen interest in Political Science and Macroeconomics.