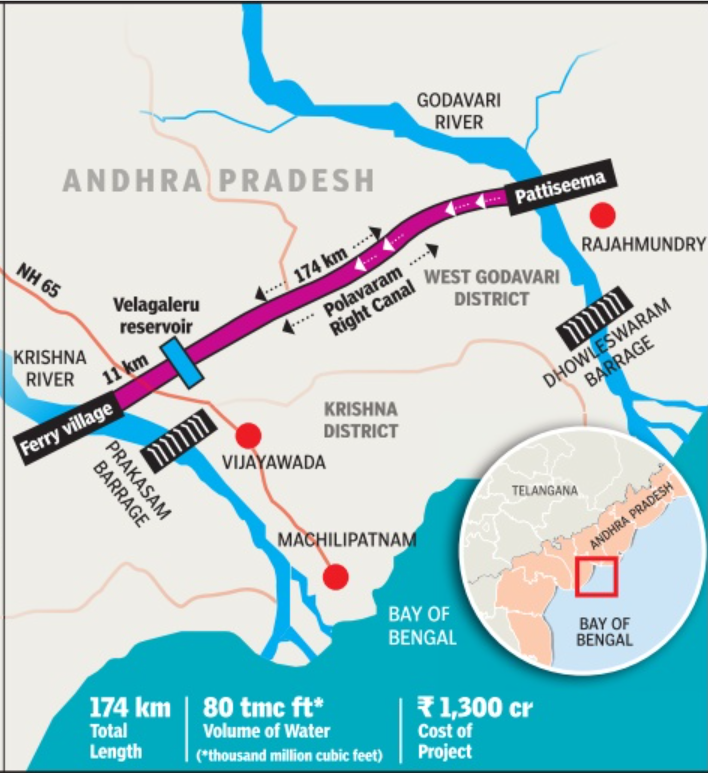 Previously, the two parts of the series introduced us to the concept of river-interlinking and it’s potential consequences. Given the enthusiasm with which the government seems to fuel the river-interlinking projects has become worrisome. They seem to be counting and promoting the advantages of river-interlinking while ignoring all signs of caution. Advocates and critics of river-interlinking have been locking horns on whether the costs trump the benefits. To settle this debate we shall look no further than the rice bowl of India: the Krishna-Godavari delta basin’s Pattiseema Project.

In Andhra Pradesh’s Krishna river delta lies the region of Rayalaseema, which faced droughts for over nine consecutive years and for a total of fifteen years between 2000 and 2018. This drought-prone region forces farmers to migrate in a desperate search for work when cultivation becomes untenable. The crops often fail due to deficient rainfalls and dried up borewells. While the lands desertify, farmers drown in debts.

On the other hand, the Godavari river annually lashes out on its neighbouring regions with uncontainable floods. In August of 2020 itself, tens of villages in East and West Godavari villages were left stranded due to the river flooding, which according to reports had touched the peak of 22.90 lakh cusecs (equivalent to 198 tmc ft).

With the aim of ensuring that farmers in the Rayalaseema region get adequate access to water during harvest season while at the same time attempting to control the oversaturation of Godavari, the Pattiseema lift irrigation project was initiated. The project interlinks the Krishna and Godavari rivers and is designed to draw about 120 tmc ft (thousand million cubic feet) surplus Godavari waters into the Krishna through the Polavaram right canal, reaching Krishna at the barrage near Vijayawada. A study by Ravi Babu B. and P. Padmavathi titled Interlinking of Krishna and Godavari rivers: An ecological study further dives into the details of the project. According to their study the project is aimed at drawing about 80 tmc ft of Godavari water to Krishna, of which 10 tmc ft is intended for domestic and industrial use in major Krishna and West Godavari districts, and the remaining is intended at satisfying the irrigation needs of 7 lakh acres of paddy fields. The project was commissioned in 2014 and was completed in 2016, and is highly praised for being completed in the record time of two years.

The project has been operational for about four years now. It can serve as a peek into the future of what can be expected if we go ahead with the river-interlinking projects across the country. And thus, this case study aims to ask two major questions: What was the socio-economic and ecological cost of building the project, and, what has been the extent of the benefits accrued to the farmers, if at all.

In 2015 while the Pattiseema project was underway, many farmer groups rose in protest claiming that their farmlands were acquired for the project either without their consultation, or through forceful consent. Yernei Nagendranath, the president of the Federation of Farmers, while addressing his organization and the Bhartoya Kisan Sangh at a round table conference, accused the then Chief Minister N Chandrababu Naidu of not holding even a single meeting with the farmers for consultation despite rising protests. While there have been reports of compensations being sanctioned to the farmers (sufficiency of which is a question in itself), what stopped the government from bringing the farmers into confidence and making them a part of the decision making process, if the purpose of the project was to benefit the farmers?

Though the government’s indifference to the farmers’ grievances is not unprecedented, it may be excused if the project by and large does indeed help them. While there is less evidence of that, the interlinking of Krishna and Godavari rivers has posed a serious challenge for the fisherman in the region.

Marine scientists have always cautioned the policy makers on the negative ecological impacts of river-interlinking. In their study authors Ravi Babu B. and P. Padmavathi note that in addition to aquatic life, fish diversity is severely affected, due to which the fishermen in Guntur district’s Tadepalli village on the banks of river Krishna having been facing trouble from a species of fish which they had never seen in the river before. The authors note that the change in depth, flow and turbidity of water creates a barrier for indigenous fishes to migrate upstream and spawn. In addition to that, river-interlinking encourages the spread of alien invasive species that “out-compete the endemic ones or even hybridize with them and carry disease-causing parasites and pathogens through water”. And thus the farmers found that alien species of fish damage their nets and scare away other fishes. And consequently their catch, and thus their earning, has dropped.

Such consequences of river-interlinking does weigh the debate in favour of the critics. However their fears are not limited to adverse impacts of river-interlinking on farmers and fishermen. They are also concerned about the capacity of the government bodies in carrying out the project without corrupt practices. The Pattiseema project validates those fears.

In 2017 the Comptroller and Auditor General (CAG) report found that the Pattiseema project had costed the taxpayers an avoidable expenditure of Rs 351.40 crores due to the mismanagement in project execution. The CAG observed that this additional expenditure was  due to changes in construction patterns, but even more surprisingly due to a labour welfare tax benefit that was accrued to the contractor by mistake!

Such transgressions by the government along with added burden on the local residents of the Rayalaseema region paints a pessimistic picture about the success of river-interlinking projects. Although, if the overall impact is found to be positive in mitigating the effect of droughts and in substantially benefitting the farmers, we may be willing to forego the corrupt practices and the damaging consequences of the construction of the Pattiseema project. However, the reality is far from what is desired.

Performance of the Project and Benefits to the Farmers

Despite four years in operation, there is  no substantial literature that evaluates the impact of the project which can be utilised to study the net outcome of river-interlinking. However with the limited evidence available, we may be able to conclude that lives of the farmers are not significantly different than before. The farmers living in Krishna-delta region continue facing severe droughts and are forced to migrate, while Godavari flooding continues to wreak havoc in its neighbouring districts. The Pattiseema project is clearly unable to tackle the primary problem it was constructed for! Moreover, the authorities also seem to be becoming more pessimistic about the project’s success, having reduced the amount of water pumped from 151 tmc ft in 2017 to 42.99 tmc ft in 2019.

Settling the Debate: A Cost-Benefit Analysis

From preceding sections we can see overwhelming evidence of severely adverse consequences of river-interlinking, as compared to little or no benefits accruing to the farmers. The farmer distress seems to be no less brutal than it was before the completion of the project, on top of which they were forcefully made to part from the very land that was to be irrigated using the water from Pattiseema. Moreover it has severely affected the fisherman community, and this calls for a deeper dive in studying the pre-post impact evaluation of the river-interlinking on the local economics of the region. The negligence of the government, of both the farmer grievances and of ethical management practices, raises many questions on the feasibility of river-interlinking. At this point, we can only be pessimistic.

Rishita Sankrit is a Teaching Fellow for Economics at Ashoka University.