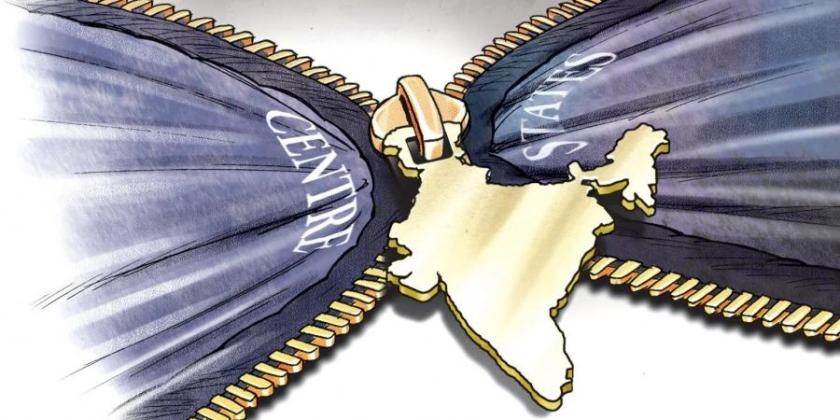 Why did the central government refuse to pay up GST compensation to states across India? Do you want to know?

Where are we now?

India’s GDP was growing at 7-8% till a few years back, making it the fastest-growing economy in the world. However, today we have reached a stage where our GDP growth has sunk to minus 23.9% (QoQ). Union finance minister Nirmala Sitharaman has attributed the collapse of the Indian Economy to an “act of God”. But, what was the context in which this point was raised?

Let’s go through the story of GST from its implementation to the 41st GST Council Meeting.

The GST tax regime was proposed by the Centre many years before 2017. However, it was actually implemented in India in 2017, making way for a unified tax regime and removing the multiple taxes that existed before it. You must be wondering how tough it would have been convincing the states to completely change the tax structure and give up their fiscal sovereignty to the GST Council. The states were in opposition to this because they felt that they would lose their autonomy and freedom in levying tax rates and administration thereof.

Before GST, states exporting goods to other states collected a tax. GST is a destination-based tax, i.e., the state where the goods are sold receive the tax. This implies that manufacturing states would lose out while consuming states would benefit.

Now, you must be wondering what the states would do if their tax collections fell short of their expectations.

To address this, an agreement happened wherein each year a state’s revenue was expected to grow at 14% (from base year 2015-2016) and if the actual revenues fell short, the Centre would compensate the state with the shortfall. This bargain would last for five years since the implementation of GST.

Seems like a good bargain for the states, right?

Don’t go too fast. I will tell you what happened.

The 14% growth rate had many issues. One, that a common growth rate in tax revenues was assumed for all the states in India. Second, the 14% growth rate was too ambitious. Third, it is now evident that the Indian economy started to face headwinds in FY17 (the year in which demonetisation happened). FY16 was used as the base year for calculation of GST shortfall, not FY17, the year immediately preceding the GST implementation year.

Wondering how the Centre planned to fund the shortfall?

The Centre had planned to fund the shortfall by creating a GST Compensation Fund, which was made using the cess (a tax over and above GST) from the sale of sin and luxury items like tobacco etc.

However, the Centre started dwindling in making the compensations in 2019. In the August 2020 meeting, the compensation cess gap has been estimated at Rs 3 lakh crore in this current financial year, of which only Rs 65,000 crore has been collected, leaving a shortfall due to the states of Rs 2.35 lakh crore. Terming the pandemic as an “Act of God”, Union finance minister Nirmala Sitharaman revealed that the Centre would not be able to make good on their promise.

What’s the way ahead?

The Centre has suggested a remedy to the states to get themselves out of this compensation issue. States could either borrow ₹97,000 crores from the Reserve Bank of India (RBI) or take ₹2.35 lakhs crores from the market under different terms.

However, the states including Bihar, where BJP has its deputy CM, are saying that it is the moral duty of the Centre to pay. They believe that if the Centre doesn’t have the money, it should borrow, instead of asking the states to borrow. Moreover, the data on total government expenditure illustrates that in 2019, the total expenditure of the Centre was Rs 24.4 lakh crore while that of the states was Rs 35.5 lakh crore. State governments are on the frontline of the war against the pandemic. Thus, the Centre must figure out a way in which at least a partial compensation for the current time is provided to the states.

Arvind Subramaniam, former Chief Economic Adviser of India believes that the “Centre must make the first move, come forward and accept the important spirit of the compensation deal, namely that it alone has a responsibility to meet the states’ shortfall.”

Acts of God or force majeure clauses are used in contract law to protect parties in a contract from situations that may arise outside of any one party’s control. For instance, insurance companies wouldn’t pay out vehicle insurance if the car is lost in an earthquake, if they had to do so they would go bankrupt.

While private institutions and entities may claim force majeure in cases of such events, the government must not do so. This is because, in events of economic uncertainty, private entities would become reluctant towards spending and investing. The reduction of expenditure on a mass level might lead to economic contraction. Thus, it becomes the duty of the government to carry out spending and ensure that livelihood is sustained. By backing out of this compensation, the Centre is essentially declaring that it cannot control the current situation which would pass on a slowdown and loss of livelihood in the economy to the citizens.

You are now up to speed with the story of GST in India! Hoping the best for the states and the Centre in tackling the compensation issue.

Ashu Jain is a second-year student at Ashoka University pursuing a major in Economics and Finance.