In the light of the India-Africa Forum Summit (IAFS) this month, Richa Sekhani views the Chinese slowdown as a chance for India to deepen its relationship with African Countries.

As China is confronting property market challenges, overcapacity in industries, debt burden and financial risks, the recent slowdown in the economy and the devaluation of the Chinese currency has heightened major concerns for the various economies across the globe, including Africa.

Over the past decades, China has been a major and the largest trading partner of Africa, with bilateral trade amounting to $220 billion in 2014. China imports a wide range of products—from copper to oil—from Africa and the continent has become an increasingly important source for feeding the appetite of the consumer-rich Chinese economy. However, the dramatic slowdown of the Chinese economy has left the African region looking vulnerable.

The past few months have seen a significant deterioration in Africa’s trade balance with China. In fact, the lower forecast growth rate of 3.1% of China depicts the fragile picture affecting the dynamics of Sino-African relationship.

So, what is the exact impact of the Chinese slowdown on African economies? According to researchers at IMF: “No region may be more affected by the financial meltdown in China than Africa. If China sneezes, Africa can now catch a cold.” China is highly dependent on Africa for its mineral resources, oil and cheap labour. Given the fact that exports to China from Africa accounted for 30% of the region’s total exports between 2005 and 2012, African resource exporters are going to suffer from negative shock-waves to their industries. Lower demand from China will shrink the economies of Africa and eventually heighten the debt burden.

For the top five exporters—Angola, South Africa, the Republic of Congo, Equatorial Guinea and the Democratic Republic of Congo—a 1% decline in domestic investment growth would mean a 0.8 percentage point decline in the region’s growth. According to Fathom Consulting research, Zambia—which has the largest community of Chinese immigrants, having established successful businesses in the retail and the construction industries, followed by South Africa—is most exposed to the Chinese economic slowdown. Last month, with the devaluation of the yuan, South African stock markets suffered from heavy losses with the fall in the value of the rand by almost 8%. In addition to the damage caused on the rand, analysts also noticed the impact of the slowdown on the South African steel industry, which found it difficult to compete against cheaper Chinese steel exports. Moreover, Chinese firms are finding themselves increasingly at odds with their African hosts over environmental and labour issues.

Additionally, the tourism sector of Africa may have to bear the burden of the slowdown. The favourable exchange rate and wildlife has attracted Chinese tourists to Africa. A devaluation of the yuan would lower spending from China and thereby impact tourism. In South Africa, the situation is compounded by new complex visa regulations. For that country, the global volatility would create a double jeopardy for the local tourism industry. 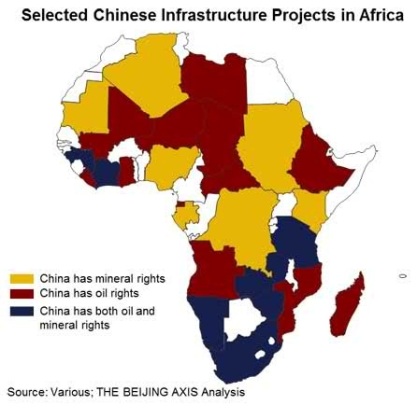 Given these developments, the slowdown may bring benefits to the Indian economy. The India-Africa Forum Summit (IAFS) in October will be a testing time for India to seek a proactive and meaningful engagement to make the best of the times. Though not as strong as China, India’s commerce with Africa has seen considerable progress over the years. In 2013, the trade between both the regions stood at $70 billion. Nigeria and Angola account for more than a quarter of India’s oil and gas imports. India’s private sector has established a significant presence in South Africa, Kenya, Tanzania and Mauritius, which has led to strong entrepreneurial ties in sectors such as retail services, mining and commodities trading.

In light of Africa’s increasing dependency on and trouble with Chinese actors, African leaders are beginning to look beyond China in an attempt to diversify. Considering that the demand for African resources will get affected from the Chinese slowdown, India and the long-standing presence of Indian businesses in the continent can help Africa deal with the losses. Compared to China, the Indian economy is expected to grow more rapidly, at 7.5%, and offers a large consumer market. With growing energy demands and Make-in-India, further engagement with Africa is possible. Moreover, India provides a useful model for democratic development. The learning experience from India can help Africa strengthen its judicial system. Additionally, India can be a useful partner to support Africa against terrorism.

The upcoming IAFS will be an occasion to harness this opportunity and a meaningful strategic engagement beneficial to both the countries.

(This article was previously published in Financial Express. You can find it here)